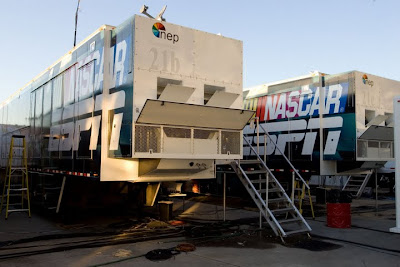 What a mess. The original idea back in 2007 that ESPN was going to come in and set the world on fire with the final seventeen Sprint Cup Series races of the season has long since been buried.

The overnight TV ratings for Martinsville were down from last year. The television package on the Cup side may be at an all-time low. It's easy to blame that on Jimmie Johnson, NFL football or Major League Baseball. Unfortunately, that is the reality of the TV landscape at this time of year. It's no surprise to anyone.

If something is not working in a sports competition, change is coming. Quarterbacks are replaced, crew chiefs are switched, pitchers are pulled. We all know the drill.

The single biggest problem this season in ESPN's Sprint Cup Series telecasts has been the complete lack of change. You know it. I know it. NASCAR knows it. ESPN knows it.

There they are, the same guys saying the same things in the TV booth. Meanwhile, the Director shows the same in-car cameras and tight shots until we are all screaming for mercy and totally confused. The Jerry Punch monotone tells us the car numbers, names and hometowns of the twelve Chasers as if we have just landed from Mars.

Then, in an instant, it is back to the monotone, the confusion and the NASCAR on ESPN cycle begins again.

Full-screen pictures show random green flag pitstops while the race continues out of sight. Announcers jump from pit to pit without any point of reference, pitstop timing or knowledge of team strategy. TV stays on pit road and lets the field cycle through while the race is raging but never shown.

A big accident brings silence from the play-by-play announcer and stammering attempts to fill-in from the analysts. Car numbers and names fill the air with absolutely no indication of what happened, where it happened or why it happened. Where NASCAR on ESPN is concerned, replays tell the tale.

Caution flag pitstops bring a half-hearted attempt at showing the top three drivers in a split-screen mode. Ultimately, the Director leaves to focus on Jimmie Johnson and the race off pit road comes down to where the #48 car fits into the line-up.

Cars zooming up through the pack are never identified. New teams suddenly pop-up in the top ten without ever having been mentioned. Issues on pit stops are never reported, unless they involve the #48 team. Then, multiple replays with timing breakdowns are shown overtop of live racing to see exactly which nut on which wheel fell on the ground and who was to blame.

Talladega is ESPN's last hope to salvage anything from this season. The natural excitement of the racing is provided without charge by the field. The spectacular pictures are provided by the track. The energy is provided by one of the best crowds anywhere in professional sports. ESPN need to bring only one thing. That is change.

Just like the non-Chase teams have already started to make major changes with an eye toward next season, ESPN must do the same. The boring, disjointed and non-fan friendly TV coverage must change. New faces, new production approaches and effective management behind-the-scenes are the only things that will right this tailspin.

Make no mistake, this is a disaster. ESPN's college football has been going strong. SportsCenter with Hannah Storm has reinvigorated the ESPN mornings. Monday Night Football has finally hit on a good combination. NASCAR Now has been a top-notch studio show all season long. Even the Indy 500 was fun to watch. The NASCAR races stick out like a sore thumb.

ESPN has five days to get together and decide how to change things at Talladega. There is no other choice. If this race falls apart like Martinsville, the TV viewers are not coming back. There are simply too many other sports TV options.

Just as the new pitcher has to get the out, the new crew chief has to get the win and the new quarterback has to score a touchdown, the ESPN team has to bring back NASCAR's alienated fans to win this game.

The NASCAR Countdown show hits ABC on Sunday at noon ET. The green flag falls at 1:19PM. It should be interesting.

Your comments on this topic are welcome. To add your opinion, just click on the comments button below. This is a family-friendly website, please keep that in mind when posting. Thank you for taking the time to stop by The Daly Planet.
Posted by Daly Planet Editor at 11:00 PM 81 comments: