Recovered From The 24 Hours Of Las Vegas? 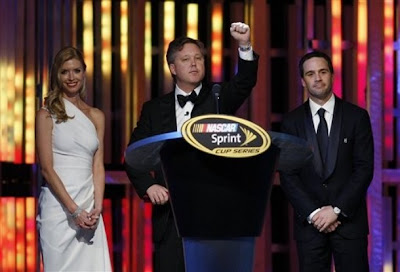 There were a whole lot of changes being announced as the date for the first Sprint Cup Series banquet held in Las Vegas, NV approached.

Out was ESPN Classic and in was SPEED. Out was Jerry Punch and in were Mike Joy and Krista Voda. Along came Frank Caliendo to host and at the very last minute, Brooks and Dunn to entertain.

NASCAR switched the TV coverage of this event so that it could be live on SPEED. It was promoted just that way in the national media. Click here to read SPEED's own press release.

It was December 6th when TDP posted a column about the 2008 banquet. "Sprint Cup Series Banquet Not Exactly Live On ESPN Classic" was the title. We pointed out that much of the banquet was actually played back to TV viewers after being recorded. Click the title to read the post and viewer comments.

Luckily, NASCAR fans love to multi-task. Last year, fans listening on Sirius Satellite radio were hearing the banquet live. Unfortunately for ESPN, almost all of them were also watching the TV coverage. Needless to say it did not take a rocket scientist to figure out that when the radio and TV coverage did not match something was wrong. The TV coverage was over an hour behind what had happened live.

It was the fact that ESPN Classic kept a graphic on the screen that said "Live" that really drove some fans right over the brink. What a way to end the season.

Well, that was last year and now another Sprint Cup Series banquet has come and gone. Want to take a guess at what this column is about? That's right. This time SPEED and NASCAR tried to pull the same trick and it backfired again.

The problem is that trying to disguise something as live when it is not rarely works these days. The reason is the myriad of Internet-based communications systems that have changed the world as we know it. In this case, the culprit was Twitter.

All over the Sprint Cup Series banquet at the Wynn Hotel fingers were busy on keyboards. NASCAR reporters from TV networks and online news sites were tweeting away. Team PR reps, NASCAR spokesmen and even SPEED's Rutledge Wood were describing the music, comedy and opening speeches. There was only one problem.

Meanwhile, Twitter users were being treated to descriptions of Frank Caliendo's opening remarks and then the live music of Brooks and Dunn. Once again, things were out of whack. It quickly became apparent just how out of whack they could get.

As Byrnes and Hammond continued to introduce clips, fans spotted a countdown clock over their shoulder. It looked like it was counting down to the start of the banquet. It also looked like there was a long way to go. What started with momentum quickly lost speed as it was apparent fans were once again watching pre-recorded content instead of a live show.

Instead of 9PM, it was 10PM before Frank Caliendo appeared on TV for NASCAR fans. The opening portion of the Sprint Cup Series banquet had again been delayed on TV by one hour.

Meanwhile, NASCAR's own Twitter news service was still typing away and offering detailed descriptions to the fans of what was actually happening live. Talk about the left hand not knowing what the right hand was doing.

While Caliendo was just starting out on TV the actual attendees at the banquet were enjoying dinner. Pictures of menus and entrees were being sent via Twitter even as Caliendo welcomed everyone and the first musical number got underway on the delayed SPEED broadcast.

Eventually, after the hour of highlights from Byrnes and the recorded portion of the opening festivities, things got slightly more in sync. However, the time delay was still significant and nothing from the entire evening was ever live on SPEED.

Unfortunately, the two recorded portions combined had taken such a long time it quickly became apparent that the top three drivers would be speaking well after midnight Eastern Time. In fact, Jimmie Johnson did not appear until after 1AM Saturday morning.

Fans who worked a full day on Friday started to sign-off before midnight with email and Twitter messages that were not particularly positive in nature. Some said they would record the remainder of the broadcast. Others were so put off by the format they did not care. One thing is for sure, this has to change for next season.

Allowing the TV viewers to see the opening portion of the banquet live and then inserting Byrnes and Hammond during the dinner service would have made much more sense. After recapping the season, SPEED could then return live for the final part of the evening that included speeches from the top ten drivers.

On a positive note, Voda and Joy were perfect in their roles. Byrnes and Hammond had fun and it was a welcoming vibe from the telecast. Edited footage this year included the reality of racing accidents, tight tempers and even team radio chatter that required lots of bleeping. However, the faked footage of Ryan Newman made to look as if he was upside down after a crash was not such a good idea.

Caliendo was a last minute host and he did what he could do. That meant lots of John Madden, President Bush, Charles Barkley and Dr. Phil impressions. What real role a celebrity host has when the bottom line issues are length of show and NASCAR content is debatable. Voda and Joy may just need a shot at going it alone to find out.

Brooks and Dunn hit a home run but musicians David Gray and the group Escala did not. Even comedian John Pinette entertained without any NASCAR references at all. What was the point? Perhaps, building next year's program for TV and then letting the drivers, teams and sponsors have fun after the televised portion is over might make more sense.

SPEED's TV team was brought in at the last minute this season. The network promises that if they are allowed to carry the event next year there will be some significant changes in format. Nothing could make a lot of weary fans happier.

Please share with us your opinions on this telecast and suggestions for the future. To add your comment, just click on the comments button below. This is a family-friendly website, so comments may be moderated prior to posting. Thank you for stopping by The Daly Planet.
Posted by Daly Planet Editor at 9:00 PM 42 comments: