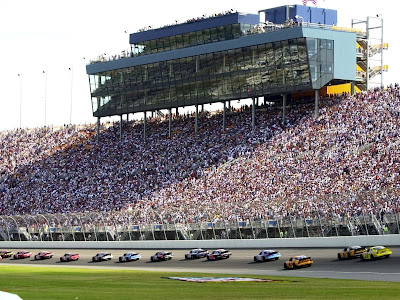 This is the final TNT race of 2010 and the six race package has been an interesting mix of television moments. As usual, there are positives and negatives in every large scale TV production.

Chicagoland Speedway yielded an awful race on the Nationwide Series side Friday night. NASCAR manipulated the outcome with several questionable debris caution flags that ultimately wrecked a lot of cars and handed the win to Kyle Busch in a confusing final restart. If that is the sport NASCAR wants to present, TNT is going to have a long night.

The Sprint Cup drivers are now divided into three camps. First, the teams already positioned squarely in the Chase. Second, the teams on the bubble and finally those teams with nothing to lose who will take any chance to win. This is a familiar scenario in the new points format.

Lindsay Czarniak will host the pre-race Countdown to Green show and she will set the tone. Either TNT will continue to look at the season as a whole or simply concentrate its time and effort on this final race. That should be an interesting decision.

Kyle Petty and Larry McReynolds have been solid together on the pre-race show. They respect each other on the air and McReynolds seems to finally have awakened from his self-imposed ban on saying anything perceived to be negative about the sport. Petty brings out opinions in whomever he works with and that is a wonderful trait.

TNT's pre-race features have been a hit. Pride of NASCAR has been so much more than the garbage offered by FOX and Wally's World is a humorous way of getting fans familiar with the various tracks. Having one Cup driver as a guest live before the race has also been a simple but effective tool for TNT.

Adam Alexander has been solid in his information and his comments, but he has not shown the natural spark of excitement that veteran TV play-by-play announcers need. This has put Petty and Wally Dallenbach Jr. in the position of trying to add emotion and excitement to the telecasts.

While Daytona put Alexander in the position of directing traffic for the Wide Open coverage, this Saturday in Chicagoland the telecast will return to full-screen commercials and the regular format. If the Nationwide Series race is any indication, Alexander is going to have his work cut-out for him where excitement is concerned.

TNT's Ralph Sheheen filled-in last season after the departure of Bill Weber. Many thought that Sheheen would again be the choice in the TV booth for his natural excitement and enthusiasm. Instead, he has been having a super summer on pit road.

Sheheen's interview with an angry Kyle Busch should serve as an example of exactly how to handle the high-profile and volatile Sprint Cup Series drivers. So often, they are allowed to make angry or sarcastic comments without being called out on the spot. Sheheen showed how that should be handled live on national TV.

Marty Snider and Matt Yocum have flown under the radar for TNT. They have been in the right spot at the right time and provided the right information. The glaring problem on this team is Phil Parsons. From his floundering interview with Kevin Harvick in Pocono to his constantly congratulating drivers on the air, Parsons was simply the wrong choice for this assignment.

Chicagoland should give TNT an opportunity to follow several storylines and use the content presented in the pre-race show as a theme. The long periods of green flag racing at this track can leave a TV team flat-footed without stories to follow that were presented earlier to viewers.

Luckily, the track makes great TV pictures, especially after sunset. It will be up to the director to keep the camera wide and show packs of cars racing. Otherwise, racing on this track winds-up looking like a Goodyear tire test or practice session.

RaceBuddy will be offered for the final time on NASCAR.com without charge. This online addition has been a big positive for the coverage. The Turner Sports folks are still at an impasse with FOX and ESPN. There are currently no plans to offer any online applications of this type for the rest of the Sprint Cup season.

The "extended" post-race shows on NASCAR.com have just not worked out. By the time fans who are viewing on TV got to the computer, powered it up and logged on the program was basically over. There was also no ability to rewind and view it again.

There is little doubt that to solve the problem of attracting and keeping the younger fans NASCAR must move in an online direction immediately. How and when this will be done is still a mystery now four years into the current TV contract.

This post will serve to host your comments before, during and after the Sprint Cup Series race from Chicagoland. To add your TV or media-related comment, just click on the comments button below. This is a family-friendly website, please keep that in mind when posting.

Thanks for taking the time out of your weekend to drop by The Daly Planet.
Posted by Daly Planet Editor at 11:13 AM 440 comments: