Does anyone not know that "12 Rounds" stars John Cena and starts in theaters soon? This Sunday, the NASCAR on Fox gang traded in Digger for an endless movie promo that was a nice reminder of the upcoming TNT promotion of "The Closer."

After airing the violent "Watchman" movie promo earlier this season, the "12 Rounds" promos were thankfully limited to a video insert on the screen during live racing. Fox is often guilty of crossing the line between enough and too much. NASCAR fans who watched on TV can come to their own conclusions on this topic.

It does seem to be an interesting mix between the over-the-top promotions of an animated gopher aimed at children and two movie promos for films each featuring graphic violence in the very same live telecast.

Chris Myers led Darrell Waltrip and Jeff Hammond through the pre-race show that featured a good look at the news and issues of the week. DW and Hammond seem to be hitting on all eight cylinders this season, despite Myers again lapsing into his clown act that should have ended years ago. And we kid because we care.

Once underway, the day and the crowd combined to finally let the announcers focus on the action and not the grandstands. Several times Mike Joy mentioned that it was almost a sellout, but the stands looked full and those images transmitted around the country sent just the right message in the nick of time.

The Fox crew was making great pictures and sound once again. It led them into one of the cleanest broadcasts in recent memory. Perhaps, because of the weird pit structure at Bristol, the TV team used a triple-split on the caution flag pit stops and it worked like a charm despite an early hiccup.

Viewers saw the video of the movie promo many times, but it was silent and did not interrupt the broadcast like Digger. The animated gopher was used sparingly, but the logo was often inserted into the "speed shots" as the cars roared by. It was certainly nice not to hear the announcers try to make cute Digger comments during this broadcast.

Once it became clear that two lanes of traffic would be the norm, the Producer and Director did a good job balancing the leaders against the stories in the pack. Despite getting caught in commercial for several cautions, the crew replayed everything that needed to be seen and had a solid day.

Fox has jumped on the Twitter bandwagon and during the event when Dale Earnhardt Jr. got lapped, it was Jeff Hammond who sent the following note:

Hammond: Time to find out if Tony Jr. can make a difference for Junior now. If they don't figure this out, they may need to make a change.

Needless to say, when Junior got lapped for the second time the implications were clear. After nicely addressing this point in the pre-race show using Waltrip with fatherly words, this time it was Hammond pointing the finger and suggesting a change.

Hammond and Myers offered a recap at the halfway point, which is something Fox must do more often. Stories unable to be followed-up by the pit reporters or the announcers in the booth should be handled by the Hollywood Hotel staff.

Waltrip and Larry McReynolds told the tale quite well as the stories unfolded. In the last ten laps once the Logano caution flew, Waltrip set the possible scenarios with McReynolds reviewing the restart rules. A late race video promo for Martinsville robbed a little momentum from the telecast, but that's what TV networks tend to do.

The closing laps were solid and brought back some of the excitement that Bristol has been famous for delivering. Thanks once again to Fox for offering the full field coming across the finish line on-camera. That really is a nice touch, especially on a short-track.

There was a lot of time left for the Fox team to fill, so everyone except the parking attendants were interviewed. This included Marcos Ambrose, who finished in the top ten despite an ailing engine. The stories of the race were all reviewed, but none of them offered anything new with the possible exception of the Junior saga.

It was Junior himself with reporter Steve Byrnes who called the media reports on Tony Eury Jr. "not reality" and reaffirmed his confidence in Eury as his crew chief. This should be an interesting topic for the Monday NASCAR TV shows.

Ultimately, the entire NASCAR on Fox team worked together to close-out the telecast. This post-race content really showed the knowledge of Hammond, McReynolds and Waltrip that SPEED viewers see regularly on Friday and Saturday coverage. It was a nice way to end the day.

TDP welcomes comments from readers. Just click on the comments button below. This is a family-friendly website, please keep that in mind when posting. Thanks for taking time from your day to stop by The Daly Planet.
Posted by Daly Planet Editor at 6:00 PM 45 comments: Links to this post 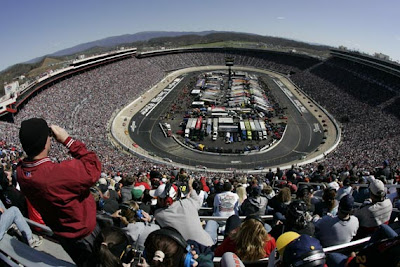 The table has been set for both the competitors and the TV network. Two good days of covering practice, qualifying and the Nationwide Series race have done a great job of building up the anticipation for the Cup Series.

Thanks again to ESPN for allocating the resources to cover the all-star charity race on Saturday. It would have been nice to see the celebrity races, but the coverage of the main event was a good start. Perhaps, this will become an annual event.

Chris Myers will greet TV viewers at 1:30PM ET from the Hollywood Hotel today. He will guide Darrell Waltrip and Jeff Hammond through a thirty minute pre-race that should include some interesting topics. Mark Martin, the Busch brothers and the Top 35 rule should be on the menu.

Calling the race as usual will be Mike Joy with Waltrip and Larry McReynolds. On pit road will be Steve Byrnes, who is nursing a toe injury. He will be joined by Dick Berggren, Krista Voda and Matt Yocum. More on the injury to Byrnes on Monday's This Week in NASCAR on SPEED at 8PM. Thanks for the update!

Bristol is a challenge to the TV director like almost no other track. Laps around 15 seconds, pits on both the front and back stretches and accidents that happen in the blink of an eye make it a non-stop frenzy in the TV truck.

One of the big issues for Fox this season has been the inability to tell the tale of those teams outside of the top fifteen or so on the track. This is especially true for the front runners who fall to the back for a variety of reasons and are never heard from again.

The "old school" TV philosophy on this track was to let the rooftop cameras simply pan back through the field until they found cars racing for position. The standings shuffle so much at this track that following the leader until the final twenty laps is basically meaningless.

Digger should appear under caution conditions. Seeing him and running the animation during green flag racing would probably cost TV viewers a lap. Pit stops under caution should be a challenge for Fox in terms of what cars to highlight and how to follow the backstretch cars all the way around pit road.

Under green, the track is so loud that it has been tough for the pit reporters to even be heard. Hopefully, this week the cars that fall out of the race will be documented and the drivers interviewed despite their positions in the race.

The pieces are in place for a very good TV race and that is just what the sport needs at this time. We will be commenting on the race while it is progress, so please click the comments button below to join us.

TDP is a family-friendly website, please keep that in mind when posting. Thanks for taking the time from your day to stop by The Daly Planet.
Posted by Daly Planet Editor at 12:30 PM 275 comments: