Jarretts To Offer A New Twist On TV Commentary 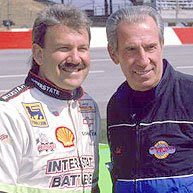 The surprise on the ESPN schedule for Bristol, TN turned out to be a one hour Saturday night special. The track is hosting an "old-timers" race for charity and ESPN is teaming Ned and Dale Jarrett up to call the action.

This pairing is perfect, as some of Ned's peers like Junior Johnson and David Pearson will be racing with Dale's contemporaries like Rusty Wallace and Jimmy Spencer. Click here to view the complete line-up from ESPN.

The race coverage starts at 6PM on ESPN2, with Allen Bestwick, Jerry Punch and most of the ESPN gang also joining in the action. This is just the kind of shot in the arm NASCAR needs right now.

Having some fun and introducing some new fans to those drivers who kept us entertained for years is a great idea. Topping it off is the track and the fact that the entire race is for charity.

The guys will be driving late model stocks and the rumors are already flying of doctored parts and special pieces. Click here to read a hilarious piece by ESPN's Ed Hinton about the trash talking that is already going-on between the competitors.

Hopefully, things go well and all involved stay safe and have a blast. Your comments are welcome on this topic, just click the comments button below. TDP is a family friendly website, please keep this in mind when posting.

Thanks again for taking the time to read The Daly Planet.
Posted by Daly Planet Editor at 9:00 AM 30 comments: Links to this post

Lots of the NASCAR TV shows now promote a new feature. Once the program is over on traditional cable TV, it continues with new and exclusive content online.

Sometimes streamed live and sometimes recorded in advance, this trend is slowly moving NASCAR toward broadband Internet use for content that was once seen only on TV.

Sites like Hulu.com and YouTube have revolutionized the way of thinking about TV programming. Many of us already routinely put shows like NASCAR Now and This Week in NASCAR on the DVR or TiVo. We have become familiar with the technology that allows us to view NASCAR content when we want to do so. It's called time shifting.

There have been many articles and stories in the news about this trend that began shortly after broadband access became easily available in the home. The trend has now picked up steam due to the economic conditions that our country is facing.

Click here for an article from last October published online by the Wall Street Journal. The subject is the movement going-on where consumers cancel their cable TV service and simply access the very same video content online. Other than the time of day, which many of us were shifting anyway, there does not seem to be much of a problem.

Dave Despain asks viewers to migrate over to the SPEEDtv.com website to continue more of Wind Tunnel when the show goes off the air on SPEED. This new content is being streamed live online. While he may not understand the technology, Despain's show is a perfect example of this trend.

Steve Byrnes tells TV viewers of This Week in NASCAR to head over to NASCAR.com for additional exclusive content not available on SPEED. Sometimes, the online bonus segment is more fun than the show itself.

Over in the ESPN world, NASCAR content is deeply woven into Internet video. ESPN-owned Jayski.com and the ESPN website both offer a combination of NASCAR Now and SportsCenter content for viewing. ESPN also uses ESPNEWS and other sources to contribute to a content pool that makes NASCAR fans check frequently for updates.

All of this conversation is interesting when it comes to the programming that surrounds the races themselves. The real fun, however, comes when NASCAR's three top series come into view. Currently, none of the racing is available online in live streaming form...officially.

TNT debuted RaceBuddy last season that provided additional camera angles and audio feeds online for that network's six race package. The results were fantastic. Unfortunately, no such online addition exists for the Fox or ABC portions of the season.

NASCAR drives a ton of revenue by selling the TV rights to the Sprint Cup Series. While the Nationwide and Camping World Truck Series are also televised live, they both pale in comparison to the money being paid for the Sprint Cup races.

Once a race is over, highlights are posted on YouTube almost immediately by all kinds of amateur editors. Video also appears on all the NASCAR websites, including those of the various TV networks. Once the checkered flag falls, the value of the live race is gone. Content of that event is viral within minutes.

So, that leaves the actual live race as the property fans must "consume" on TV. This year, DirecTV has done away with Hot Pass as we knew it. That was the only other source of actual live racing video available. While some websites have tracking and other information, the only way to see the race is on the official NASCAR TV networks.

The question is, does this approach do more harm than good? Should the video from all four networks covering the sport be streamed live for every single race? We ask in reference to the growing number of consumers who simply will not watch a multi-hour race sitting in front of a TV set.

Making live NASCAR race video available to laptops, PC's and other devices has to be a priority in this new online world order. While those of us old enough to remember a world before cable TV may have one perspective, younger folks raised in a world of iPods and Video-On-Demand look at a four hour race available only on TV and take a pass.

The total number of adults watching TV is shrinking drastically and the NASCAR TV ratings have reflected what the networks already know. Like it or not, technology is allowing much of the original TV content to be made available online for free.

Would you watch a NASCAR race online? Have you made this transition already with other television content? Would the flexibility to view races on laptops and PC's make a change in your viewing habits?

Perhaps the most asked question for the past three years here at TDP is the following. Do you already multi-task during the races with your computer online? Adding the video of the race for many of you might just be another box on your screen. What are your ideas on these types of issues?

Thanks for helping in this discussion. Your opinion always counts and we appreciate you taking the time to offer it. Just click on the comments button below to do just that. This is a family-friendly website, please keep that in mind when posting.

Appreciate you taking the time to stop by The Daly Planet.
Posted by Daly Planet Editor at 8:30 AM 22 comments: Links to this post 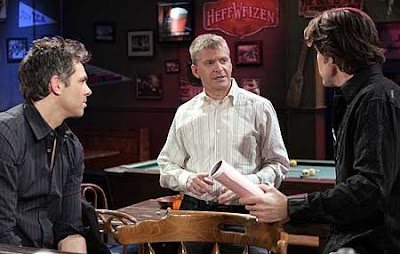 Perhaps, it is not exactly like the high-profile appearance by Carl Edwards on Fox's "24" or even Jeff Gordon hosting "Regis and Kelly". But, this Wednesday Jeff Burton gets his opportunity to have a little TV fun outside of the NASCAR world.

Click here for a sneak peek from ESPN the Magazine of Burton's afternoon appearance on the legendary "General Hospital" TV soap opera. It sounds like a lot of fun.

Burton continues to be the unofficial mayor of NASCAR and with good reason. A family man with a supportive wife and a good perspective on life, Burton is a throwback to drivers who enjoyed the sport while trying hard to raise a family and have some fun.

While he has an occasional TV interview, Burton seems content right now to be just a driver and a dad. This season fans have seen the emergence of Hermie Sadler, Ricky Craven and Ray Evernham on high-profile TV assignments. Perhaps, this is in the future for Burton.

Thanks to ESPN for the story link, please feel free to offer your comments on the Burton appearance on GH by clicking the comments button below. This is a family friendly website, please keep that in mind while posting.

Thanks again for taking the time to read The Daly Planet.
Posted by Daly Planet Editor at 8:00 AM 11 comments: Links to this post