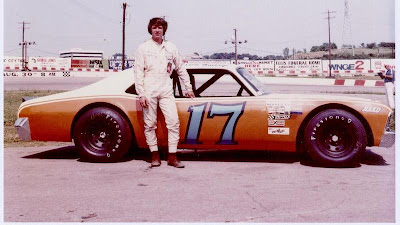 The Craftsman Truck Series will qualify on SPEED beginning at 10AM Eastern Time on Saturday. This is a weekend where the NASCAR on Fox production team is handling the Truck activities. The regular SPEED production crew is home watching.

During practice on Friday, play-by-play announcer Rick Allen struggled to try and integrate Darrell Waltrip into the coverage. Allen and his partner Phil Parsons have been doing the Truck Series for years, and normally have Michael Waltrip alongside on the SPEED broadcasts.

DW is a very different person on TV than Michael, and Allen is going to have to figure out how to step-back and let DW have more of the spotlight. In practice, Allen was making jokes and references that were just a little bit outside of DW's base of knowledge, and that did not translate well on TV.

If they can get the on-air dynamic sorted-out on Saturday morning, that will make things much better for the race in the afternoon at 3PM Eastern on Fox. As most fans know, other than Kyle Busch vs. the Truck Series regulars, the other big story is Chrissy Wallace getting in the field for the first time.

It should also be interesting to see folks like Modified standout Donny Lia and some lesser-known names take to the track on national TV to qualify. The Truck Series is always good for some surprises and with Krista Voda on pit reporter duty, viewers should get the inside scoop.

This page will host your comments about the qualifying, and there will be a new post for in-progress comments on the afternoon Truck race. To add your comment, simply click on the COMMENTS button below and follow the instructions.

Here at The Daly Planet we do not want your email address and there is nothing to join. We just want your opinion of the Truck Series qualifying coverage on SPEED.
Posted by Daly Planet Editor at 8:26 AM

Why do any of us even watch SPEED programming anymore ?

The coverage is OK.

Very unhappy about how they go about programming a show. What I just saw is a great example on why we need to start TIVO-ing all these shows.

SPEED just ran a commercial break which included not one, not two, not three... but FIVE promos in ONE break for other SPEED shows.
and in that block they ran 2 promos for the SAME SHOW.

Running the commercials I understand, but the show promos are way overloaded.

Lets just run a lower left "bug" / graphic to promo your shows while coverage of practice and or qualifying is on.

Kind of interesting that there is no DW on this show.

Since there's only 36 trucks entered and no one will DNQ, maybe they felt there wasn't enough on the line to justify having DW in the booth. Plus he'll be involved with the tape-delayed Happy Hour coverage, also he has to record the "taking laps" segment around the track for tomorrow's broadcast....by including qualifying it would've been about an 8 hour day of television for him.

DW is out there putting digger in his hole to sell more Tshirts :)

The 2 in the booth alone. They seem to have that nightly news fake emotion feel going on. "Isn't that something" "How about that"

Think they should grab a cup driver and toss them up there in the booth if DW or MW cant do the qualifying.
Would help the dynamic quite a bit.

Looks like RAIN is going to get in the way of things today at Martinsville.

Possibly by Noon at the track.

It sure would be nice to watch Cup practice as a lead-in to the Truck race. Instead we get a half-hour NASCAR Live with the cars on the track as background noise and then 3 hours of darkness leading into the Truck race.

Thanks Speed, I thought the practice blackouts and late-night tape delays of Cup Happy Hours were over after ESPN left town last fall. Instead as the years go on we get less and less and less and less NASCAR TV coverage. You'd think as satellite TV expands and there are more and more TV channels out there that we would get more TV coverage than we did years ago, not less. Sigh.

once the rain arrives (soon) more drivers to interview.

I find it interesting that 27 minutes into this 30 minute NASCAR Live that they aren't even talking about what's going on live in Cup practice. They haven't as much as told us who's the fastest in practice.

We got 4 interviews - A.J. Allmendinger (who's not racing), and then David Ragan and Bobby Labonte in taped interviews before the practice session even started, and some guy named Marcus Marshall that races Supercars???? We also got Truck qualifying highlights, Cup qualifying highlights, and talked to someone at Richmond trying to sell tickets for the next race there. We also got a sneak-peak at David Ragan's new commercial. Yawn.

I tuned in to this show hoping to get some information about what was going on live on the track during the untelevised practice session and have gotten nothing but a brief Jeff Burton update used to hype his appearance on Nascar Hotpass this week, what a letdown.

I assume DW is resting his voice...

It's really annoying for SPEED to not cover practice, yet they have a live show while the cars are on the track and they are wasting our time interviewing A.J. Allmendinger.

What a waste of time.

Truck qualifying coverage was good though!

It will be funny if Happy Hour is rained out to see what SPEED will use to fill the tape delayed practice broadcast tonight.

Well at least on the 30th and final minute of the show we got a top 10 speed chart to at least tell us a small bit of information about less than a quarter of the field. I would have thought Dillner and Rutledge would have been all over the garage reporting on the practice happenings and Speed would have treated this 30 minute NASCAR Live as quasi-practice coverage (like they did during the 2 hour NASCAR Lives during the ESPN practice blackouts last year) but no, we got irrelevant interviews not related to the practice session, useless highlights of events we've already seen, and two on-air commercials featuring David Ragan and the Richmond people that are in need of ticket purchases.

What a waste of a program. Talk about making the worst of an already bad situation.

I enjoyed once again the personality stories of the NCTS.

Between Donny Lia and Chrissy Wallace and the two old guys battling for the pole, this series has it for me.

Hopefully, DW will be a good partner for Rick and Phil this afternoon.

Don't forget the Rookie-of-the-Year front-runner Philip, don't call me McGlynn, McGilton :) Hopefully Fox has that cleaned up since their last appearance at a Truck Series race.

It should be a very interesting race. I still have a feeling though that the broadcast's just not going to have the same feel without all the usual Truck announcers on hand working this broadcast. I still wish we could see Michael Waltrip and Ray Dunlap instead of DW and Matt Yocum (or whichever Cup pit reporter takes Ray's place this time), and Krista Voda hosting from the studio instead of Chris Myers.

I really noticed the overkill of commercial glut watching that NASCAR confidential. Even taped, when you spend more time ff than watching, there is a problem.

If we could figure out a way to see F1 and WT, we would probably get rid of digital even though we get 20 channels on the SPEED tier alone...but it just seems anymore, SPEED supersizes everything.

The 2 and three hour RACEDAY shows that can EASILY be edited down to an hour and stop the fluff and minutia.

I hope the trucks get the race in but I can't read the weather map and FOX is covering it....so who knows.

I am shocked at the negativity of the comments. Its almost like we have lost sight of the bigger picture here. I thought the coverage was well done. Who cares how many promos SPEED puts in the breaks- you fast forward thought them anyway...right?