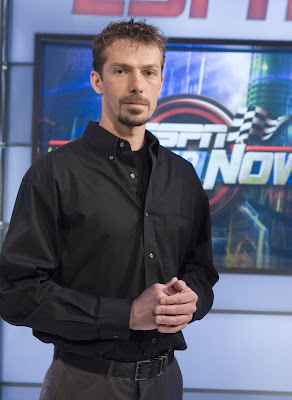 The Daly Planet welcomes comments from readers. Simply click on the COMMENTS button below and follow the easy instructions. The rules for posting are located on the right side of the main page. Thank you for taking the time to stop by.
Posted by Daly Planet Editor at 8:35 PM

I really enjoy his NN and N'wide segments :). I look forward to more DJ time this weekend.

Put me on the list of DJ's fans. Yeah! And he'll get better with time.

DJ does a great job. Nascar TV needs more like him.

I too am happy for Mr. Copp. I have enjoyed his pieces on pit stops, and his other analysis.

There's only one problem. With Dale Jarrett working for ESPN (who some time referred to as "DJ") and now DJ Copp working races, How are we going to not get confused?

I'm sure we will get through it. Just glad to see more and more talented people added to the race coverage.

DJ'C' is like a breath of fresh air! I hope that those who have clout will realize this and give him way more air time. His presentations are very interesting and he gives the sport a very 'real' feel. I think Tim is good but DJ'C' really tells it like it is with pizzazz! He's a keeper! Thanks John, as always!

DJ'C', I like that Chase. Maybe that will stick.

i'm very much looking forward to DJC (what a GREAT nickname, chase! thanks!) in the tech center. this is one time that i'm hoping there will be plenty of opportunities to go to the tech center for information! knock 'em dead, DJC!

on a side note: seems to me that the last coupla of years has seen somewhat of a "changing of the guard" in this part of our sport. there is a lot to be said for bringing fresh faces, new voices, and different experiences into the positions in various broadcasts.

but i still miss bp.

Is Brewer really just "on vacation" by his own choice, or was he told to go on vacation over his slip up last week?

Brewer, Bestwick and Daugherty are on planned vacations from the air this week.

Perhaps, you could let us in on his big slip-up?

JD,
A little OT, but I think you should keep the blue color on the site. Looks nice.

Going to keep it for the rest of the season for Petty.

Here's hoping DJC impresses everyone even more than he already has.

I can't stand listening to Tim Brewer, so his segments are really the only ones I FF through these days. (Well, his stuff and any interview with Kyle Busch or David Ragan)

I would love to see DJC instead of Tim on my TV on a regular basis.

And I wondered why everything is blue. I like it too, it's actually easier to read than the yellow/brown.

I enjoy DJC's enthusiasm. This should be fun!

I'm glad that DJC is getting another chance to shine. He's done well with the pit-cam.

On a side note --- JD, I must agree with all the comments about the blue. Richard is one our last links with NASCAR's past, and we need to honor that past whenever and however we can. Thank you.

And as jhd said, it is much easier on the eyes. Good choice.

Is Brewer really just "on vacation" by his own choice, or was he told to go on vacation over his slip up last week?

Perhaps, you could let us in on his big slip-up?

Oh man, I thought I missed something big. I think Brewer gets a mulligan for that one.

DJC sounds like a fantastic idea, I have enjoyed his clips from the beginning even back when NN was a should miss show he was one of the bright spots.
PS Add me to the likes the blue contingent.

Since the commenters like the blue, you're not going to change it on us, are you? I'm hoping you keep it to show ESPN and SPEED you give the fans what they want.

I like the nickanme DJC also. I would like to think that since this column is all about him, he's reading it. Do you like your new nickname?

Good deal!
I have enjoyed every time I have seen him on screen. Its nice to have a "grunt" instead of a manager aka Crew Chief, give us a prospective from his angle.

I hope they keep expanding his roll over time.

Thanks for letting us know about this. I am a Bobby Labonte fan so I'm super-excited for DJ and can't wait to see his segments this weekend. This is good stuff!! :-)