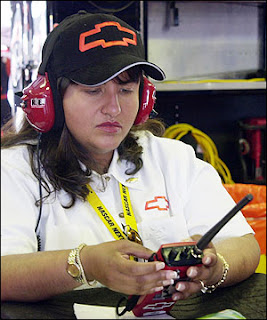 The Daly Planet welcomes comments from readers. Simply click on the COMMENTS button below and follow the easy instructions. The rules for posting are located on the right side of the main page. Thank you for taking the time to stop by.
Posted by Daly Planet Editor at 8:31 PM

JD, being a fan of puns, did you mean to use the Mexican Standoff phrase on purpose regarding the Colon story...Puerto Rico, Spanish...Mexico, Spanish. :)

Anyway, I thought this was an EXCELLENT piece (but needed to be longer!!) To be honest, my tv was on MUTE in my small protest against ESPN but DID want to see the story on this woman. So was multi=tasking until the segment came on. I must say, I never heard of her before a couple days ago but loved the soundbites of today's drivers and the interview with this short woman with a huge spirit.

HOWEVER, the skeptical wench in me wondered about the TIMING of this story in lieu of the lawsuit. Nevertheless, it was a great story...but like I said, I wish the segment could've been longer..would've loved to have heard more about her childhood.

Indeed, why don't we hear more stories like this? Darn shame.

I would've enjoyed a longer interview with the subject.

It would be nice to see this kind of thing featured on a Real deal segment with Wendy sometime.

The taste left me wanting more about this woman's story..and all the other's that go untold.

I am tired of the bad stories making the news these days. :(

No connection on the terms. Just wish this could have been a thirty minute show. Don't you wonder how many other fascinating people there are that TV viewers have never seen?

Don't you wonder how many other fascinating people there are that TV viewers have never seen?

Yes! As one relatively new to NASCAR, and who puts up with all my friends rolling their eyes that I have even gotten possessed with this "Redneck sport", ...yes, I wish more of these behind the scenes stories would get shared and NOTICED.

She is the most powerful woman in NASCAR, a great engineer, and as much as I read in books and online, never heard of this woman?

Yet anybody with something negative to say or somebody does something bad, and it's yapped about for days or weeks.

This is the kind of story that could help endear folks to the sport of NASCAR..that it's not just an "old boys sport."

Well, even though it kind of is..and the rules, well, can't explain those either, lol.

But yea, this should've been a 30 minute segment for sure.
I enjoyed Alba's demeanor. Hope somebody else picks up on her story this season.
And others like her.

Only watched the Grant story on E:60 last time and not the rest of the show. This time, I really enjoyed the Barack Obama/Reggie Love segment, the small tidbit at the end with Tiger Woods and, of course, Alba Colon's NASCAR story. Was it Jimmie Johnson who said she cracks the whip when she has to? She's certainly very well-respected by everyone in the garage and especially Tony Stewart. I didn't agree with her, however, in why HMS is not winning that much this year. They were behind in their COT program? I don't think so. Everybody else has just caught up. Enjoyed the show.

I enjoyed the segment :). I agree it's a shame that these fascinating stories are not told. It really should have been longer.

I loved the segments BP use to do with some of the folks "back at the shop" and some of the OTW members.

Thanks JD for the review of this program. I was really looking forward to seeing it; however, Fay decided that I didn’t need my cable for a portion of last evening.

As a female without much tall to her credit, I noticed Ms. Colon at a race and found out who she was. I had the pleasure of meeting her at another race and that was a very nice experience.

Wouldn't she have been fantastic as a person featured in a "NASCAR Confidential" episode?

JD-
Absolutely! My impression was a very professional woman with a great sense of humor. Really sorry that I had to miss the program.

The show "7 Days" on Speed a couple of years ago was very well done, and did showcase a week in the life of people associated with NASCAR. It's a shame that this show isn't still on the air.

I also was a fan of "NASCAR Drivers: 360" that was on FX. Although it only followed drivers, it still gave the viewers a behind-the-scenes look at their personal lives.

There are so many interesting stories in the garages. It would be great if these stories were told.

I thought it was a well done piece, though I was already familiar with her. I realize it's a TV blog, which is good because we need more of this (and Lisa is a pro). But I read an article about Colon a while back. So I do think the print press sometimes does a better job at finding these stories than TV does. Maybe they have more time and 'space' for it. And they don't have as much pressure for 'ratings' although readership is obviously measured. That is my question about these features--if there is such a big audience that would give SPEED or ESPN or whoever kickbutt ratings, why aren't they showing it? Or is it just the reality that we're a small audience? It can't be just because 'they don't have to.' If there was money to be made, they'd want it. I do believe you could *grow* such numbers though, with a little patience.

As far as E60 goes, I also saw the one with Randy Moss (not sure if JD had mentioned it or not). I thought it was a fluff piece that didn't focus in any way at his controversial behavior, which should have at least been mentioned, because it's relevant to how he's going to behave as an owner. Also, it didn't go into much about how he's going to balance his careers. Anyways, that same episode had a *way* more fascinating piece about 'eventing' (equestrian competitions.) Off topic, I realize, but it was very informative, if not just a bit slanted. But since we're talking about the program, you can see it has a lot of potential, and at least if some of the stories are racing, that's good.

I liked the segment but it never really told how she helped them out. It was about how she got there and who she knew. Would of liked to see her more hands on as to what she does...

Really enjoyed the show, she definately would be a great Nascar Confidental subject. Nice to see a powerful women in Nascar who is there because of her brain and personality.