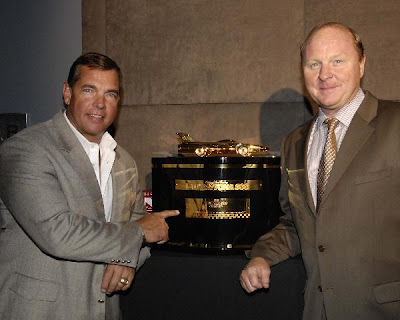 This post is going to serve to host your comments about the Friday TV coverage and the issues discussed above. To add your TV-related opinion, just click on the COMMENTS button below and follow the easy instructions. The rules for posting are located on the right side of the main page. Thanks for taking the time to stop by The Daly Planet.
Posted by Daly Planet Editor at 8:00 PM

I don't know the length of the contract between Nascar and ABC/ESPN, but I hope it never gets renewed. I can't wait for football season to start, have games run over, and play "Find-The-Channel" as ESPN starts jumping around. Of course, the crawl will tell you that you won't miss the Green Flag.

This is so sad for NASCAR. Speed has been nothing but supportive of ESPN - promoting their telecasts during SPEED's own broadcasts but what does the world-wide-leader do to ESPN, NASCAR and to all of the fans? pretend that SPEED does not even exist once again.

When NBC/TNT had full second half and as mentioned by JD- Weber/Dallenbach/Parsons would do happy hour as a TNT telecast on SPEED and it was all interesting that the two networks worked together so nicely.

Even in last the two years the TNT Pit Reporters have worked with SPEED announcers.

NASCAR tell us again how ESPN has made NASCAR telecasts better?

Guess NASCAR counts the millions of dollars as proof of this.

DAYTONA BEACH, Fla. -- NASCAR on Wednesday announced the completion of comprehensive broadcast agreements that will benefit the industry and its fans for years to come.

Under the new eight year agreements NASCAR races will be broadcast on a combination of networks that includes FOX, SPEED, Turner's TNT and ABC/ESPN beginning in 2007

I am already sick of the crap we are seeing with ESPN. They used to have quality productions, but now it is quite evident that they are only interested in the money that NASCAR is giving them. It is sad that they will not share their people with the other networks. I have said before that it is a shame that all of the races are not on Speed and that something like the truck crew or even the crew that is doing the practice and qualifying today is not doing the telecasts. I evjoy the line up that they are having today and wish that we could see them on Sunda. It would be better than hearing Jerry Punch.

As long as I don't have to listen to Rusty, Michael or Darrel it will be good day

I thought your headline might be a recently discovered torture/interrogation tactic from Gitmo . Nothing could crack someone easier than 7 hours of Hammond and McReynolds .
It's a shame that the new stars of NASCAR reporting , Jarrett and Petree won't be used . The overall broadcasting mess that is Cup racing really needs cooperation between networks .

I should be home in time for most of qualifying. Then I will be able to spend the rest of the day in my comfort zone. :)

Anyone else having problems w/Speed?? It's blinking in & out.

PammH - Mine too. Lots of glitches. Not sure if it is a satellite issue since I have Dish Network.

PammH said...
Anyone else having problems w/Speed?? It's blinking in & out.

DTV is clear in the northeast. Were abouts are you located and is there weather in your area?

Well whatever the cause of the glitching (I think it must have been a Dish Network issue), SPEED seems to be fine now.

The SPEED guys say no probs today, so give your dish or cable provider a call.

has also seemed fine here for awhile, so they must have gotten it fixed. thx all!
and my goodness, look at the cars (just the cars) on the screen while qualifying. What a concept!!

I think most of us are in our comfort zone as Lisa said with these guys. What a difference vs. ESPN. Unbelievable.

What a nice change...can we figure out how to get SPEED to take over for the rest of the season? I'm going to cherish these 3 weeks!

Love it, properly placed interviews and backstories and *if* it's needed or needs to continue during the action, they put the interview in the smaller PIP box.

No garbage about people's life histories taking up half the screen...just a nice banner at the bottom telling us what we need to know. No interviewing half the world in 90% of the screen while the 5% left is showing the poor guy is trying to qualify. The speed tracker is easy to understand and also doesn't take up half the screen like ESPNs.

Speed's practice coverage was tremendous. AMAZING how a TV network was actually able to keep the focus on the race track and not waste the viewer's time showing full-screen video packages of Kyle Busch's win and the big crash last week at Watkins Glen, videos of Kurt Busch's win at Michigan last year, or videos of every driver's "heroes" or favorite hobbies. ESPN, stay the hell away and never come back with your practice/qualifying JUNK.

Qualifying on Speed was much more pleasing to the eye than ESPN that's for sure. Scoring crawl, lap tracker, and the qualifying race car on the screen. Nothing else. No ridiculous line graphs, stat packages, driver pictures, or crew chiefs / mothers in a box on the screen. And no full-screen video packages or studio guests to divert the attention away from qualifying.

I was disappointed to see Speed skip so many cars to get the broadcast done by 5:00 though. I would have preferred to see Speed just Tivo qualifying and eat into the downtime between Cup qualifying and Nationwide practice, or just push the schedule back and eat into the Confidential show about a race that happened over 3 months ago. It's definitely rough to be staring at an empty race track on TV at 5:13, knowing that 13 minutes could have been used to show all the laps we missed.

I also continue to dumbfounded how a TV network can still skip go-or-go-homers during a limited Tivo-style format broadcast. If it is absolutely mandatory to skip a go-or-go-homer, please skip Terry Labonte who was already locked in on the champion's provisional and didn't figure into the go-or-go-home drama.

I had no problems with reception problems, which was nice.

Will somebody, anybody, tell Speed that either they need to give their guys on Trackside better microphones or else dump the mics in the crowd??? You cannot hear at least 40% of what's said by any of the guys because of all the silly background noise from the crowd. This is not something limited to Michigan International Speedway, but it appears to be a problem at a lot of the tracks. I listened to maybe 20 minutes of the show before deleting it because it was too difficult to hear what anyone was saying.

The problem with Trackside is that the crowd can't really hear what is going on and get very restless especially as the guys have their backs to them. I have attended Trackside with both setups and despite being on the front row found it difficult to hear what was going on with the current set up.