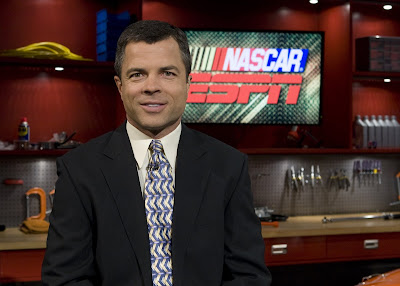 Just click on the COMMENTS button and follow the easy instructions. The rules for posting are located on the right side of the main page. Thanks for taking the time to stop by The Daly Planet.
Posted by Daly Planet Editor at 8:30 PM

Back on Monday July 14th, Boris Said predicted that the THEN top 12 in the points would be the drivers who would make the Chase!NOT BAD Boris, you had 11 out of the 12 correct! The only one that was wrong was Kasey Kahne. Hibanx

If Evernham is on tonight, I hope he can explain -specifically - what's wrong with the Dodge program. They've got 90 minutes and should be able to address this subject.

Not a single Dodge in the Chase - the only manufacturer not represented. That's just unacceptable. Toyota has been in Cup two years and has all three Gibbs drivers in the Chase in their second year.

Since Evernham brought Dodge back to the sport, he should be able to say what they need to do to improve. If they don't improve, Dodge might as well get out of the sport all together and let the owners move to another make of car.

Dodge has recently announced they are leaving the Craftsman Truck Series. While there will be some teams running Dodge, there will be no factory support.

The economic reality is slowly edging into NASCAR and the real question for Monday night is how far will it go?

annon 1034am. be carful what you wish for. JD is correct. Dodge is not providing factory support to the truck series.

Yes, it is easy to say to move on to another make of car. And guess what? the make the owner goes to also just says next year we will not provide support.

GM and Ford are going though tough times also. Just ask the retires of those companies. I do not think they care one bit about NASCAR just their health benifits and they should, they worked decades for those benifits that were promised in contracts.

The picture is bigger than I can imagine.

Yes, the economic reality is here. How far will it go it the question.

I did attend 2 or 3 races per season. Next year I will attend none. NCL and Disney CL will get my dollars.

Typo How far it will go is the question.

I wonder if Allen will ask Ray Evernham about his lawsuit against Robby Gordon.

I started to watch - saw Rusty was on and turned it off.

Not sure I like 2 different sets, get 3 more chairs for the garage for crying out loud

Only got to watch the last few minutes.. not sure about 2 sets, but wow I loved that set with Massaro, AP and Jarrett.

JD, do you know where that one was and why they can't use that every week? Is it from another show?

I thought the show went off well, except I thought Rusty & Tim didn't have to be there. Otherwise, good show focusing on the chasers.

There is a new post up about the Monday version of NASCAR Now on ESPN2. Thanks.