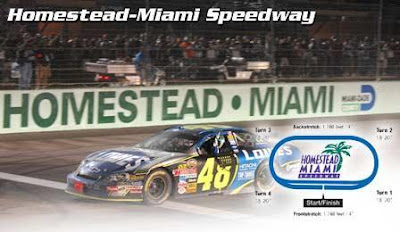 Thanks again for spending a part of this final racing weekend with The Daly Planet!
Posted by Daly Planet Editor at 9:51 AM

No rain so far in Homestead, looking very nice for qualifying.

Just got home & see sliced bread JoLo is on the pole. Got the early stuff taped for later.
Glad its nice in Homestead - rain is here off & on,in Tampa.

Where is everyone? Exciting Truck Race hangover...LOL?

It is just amazing the difference between SPEED/FOX crew and ESPN. SPEED...old friends making you feel like you are a part of the race and know the drivers. Lots of camraderie. ESPN, manufactured, staged junk, useless bells and whistles, blathering commentary, zero excitement.

After Truck race and Speed qualifying not sure I'm interested in the rest of the weekend with ESPN. What a major let down.

Thanks again JD for what you do. This is my favorite NASCAR site even though I don't normally post live. You and many of the posters seem like old friends.

Got several emails from friends who went to the track today. They say there is NO ONE there. Wow.

I was thinking posters to this blog, but yes, track is really empty and it's in the 80's. Nice day to hang out. I think people are really freaked about the economy. Try to watch racing to take your mind off of it and you see unsponsored cars, people being laid off and people not knowing what is in store for 2009 season. Can't escape it!

Perhaps people are still resting up after that fantastic Truck race. You would think that since the NW championship is not decided that there would be more people there. I know if I had tickets I would spend the ENTIRE day there but perhaps with the heat/humidity of Miami they have to pace themselves. All poor excuses I know but hey I tried

Thanks to the entire SPEED crew for all your hard work and excellent coverage this year. Funny we noticed SPEED might have been off their game a bit last night, wait till ESPN comes on. On their worst possible day the SPEED crew is so far ahead of the ESPN production team AB,AP and DJ are real good, but they just can't do it all. To bad SPEED couldn't work out a deal to take over the Nationwide coverage when ESPN gets into college football season. I know availability of SPEED versus ESPN and all ,but it would be nice.

Crumbs! in a few minutes we go from all the goodness of Speed to espn. Crumbs...
Nice interview with Johnny B. just now on Speed.

I'm really gonna miss them this afternoon, wishing they had N'wide. Dang.

Here we go the last practice of the season and we got football. ESPN should have let Speed do HH too.

so when is the game beening swithced to ESPN Classic,oh they can't there is a taped auction on

Wonderful coverage by Speed and now we have Happy Hour but surprise surprise we don't because of ESPN2 and their stupid stupid football. Why couldn't Speed have done Happy Hour too? Grrrrrrrrrrrrrrrr

Do they know that cars are on the track?

3bud the real question is do they care

Practice actually stated at 2:50 so we missed the first 15 minutes

Almost all JJ and Carl already, this is not good.

a few minutes ago I noticed Regan Smith and JPM sightings then reality set in ,back to the Edwards Johnson show. I think we are getting a preview of tomorrow's ESPN on ABC coverage.

Is it considered taboo to deliberately show empty stands? How do you as a producer balance your duty to report the story of the race, which might include poor attendance? How important is it to maintain good relations with the powers-that-be for the sport you're covering?

From a story-telling perspective, is it important NOT to show the empty stands because it might make your viewers at home decide that the ticketbuyers were right; because if they don't commit with their money, why should I commit at home with my time?

It's not an issue for practice and qualifying. Up to the networks on the race coverage.

another pat ourselves on the back piece..good grief.

ESPN sure is proud of its tech toys.

Now if it could just get people who care about NASCAR to produce the broadcasts, we'd be in good shape.

Interesting end to practice, it was a fun piece but belonged in the prerace show, I would hve preferred talking to drivers about their cars or how about an evaluation of the practices and how all the teams looked

What? No run down of the 10 fastest in Happy Hour? Just because they weren't all chasers or named Jimmie Johnson and Carl Edwards, doesn't mean that they shouldn't get mentioned.

that sure was a strange way to end the final practice...