Evernham Gets His Name Out Of The Mix 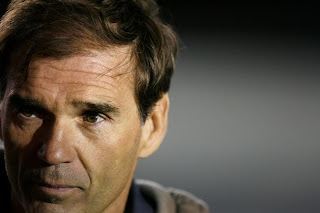 Ray Evernham continues to pave his way toward a full-time TV career in the sport. The change that will do him the most good has finally happened.

As ESPN's David Newton (click here) reports, Gillett Evernham Motorsports has changed the name of the entire organization to Richard Petty Motorsports. Evernham recently did several interviews where he made clear that he has not been involved in the day-to-day operations of GEM for some time now.

The biggest controvery surrounded his silence over the firing and then rehiring of driver Elliott Sadler. The situation was that Evernham remained a part owner of the team that still bore his name, making him a target for questions surrounding the activity of the group.

Now, the Evernham name will be removed and Richard Petty will be the "branding tool" that is used to move the company forward in the sport. This is a good role for Petty, as a team ambassador but without the same management responsibilities that put Petty Enterprises in the original situation from which they could not emerge.

Evernham is slated to appear all season on ESPN in a wide variety of roles. He will handle race analysis in the booth on select races, appear in the Infield Pit Studio as a panelist and appear as an expert on shows from NASCAR Now to SportsCenter.

This move allows Evernham to fly under the radar for this season and maintain his "outsider" status that has come to be his trademark when questions are asked about GEM. Now, expect the words Richard Petty Motorsports to be said on a regular basis by Evernham with a big smile on his face.

The Daly Planet welcomes comments from readers. Just click on the COMMENTS button below and follow the easy instructions. The rules for posting are located on the right side of the main page. Thank you for taking the time to stop by.
Posted by Daly Planet Editor at 3:44 PM

TDP - I'm a little confused. I read that the two teams merged and became GEM. I just read that 9 and 19 are GEM cars and 43 and 44 are RPM cars now. Is it one team with two divisions? How can all the teams be called RPM and still have beer on the cars? I'm confused by all of this economic stuff!!!! I hope it turns around soon.

The name change to reflect the King's legacy was expected & does help tone down the Evernham involvement. But we can't pretend Ray is completely independent. He may claim ignorance of day-to-day duties, but the merger announcement included his name as a part-owner. Also, in Newton's article, he writes "Tom Reddin... said Ray Evernham...would remain a consultant."

Until the new entity buys out Evernham's stock he still has a connection and an interest in the fortunes of the team. He should not be calling races for ESPN.

Like it or not Ray Evernham is one of the most knowledgable people in the sport and as of now he has nothing to do with the team other than maybe some stock he still owns in the team and I am sure that he could not talk legally about what was going on until he was bought out and the Petty merger was complete and this is what looks like has happened. I personally would much rather listen to him than Rusty or Brad any day of the week.

He still owns a small minority interest in the team so I doubt he will be very candid.