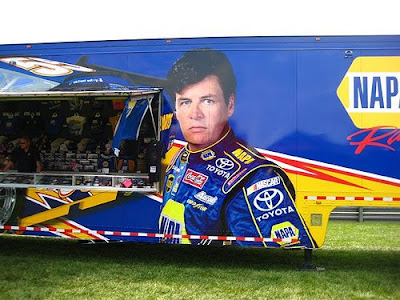 TDP welcomes comments from readers. Just click on the comments button below and follow the easy instructions. The rules for posting are located on the right side of the main page. Thank you for taking the time to stop by The Daly Planet.
Posted by Daly Planet Editor at 6:00 PM

Too bad the Biff sold that helicopter but I'm glad Mickey is going to try and do the double he should be all jacked up by the time he gets to the TWIN set hope the Biff can handle it.

Mikey doesn't have to do the show Rick & Phil can carry on and do a great race broadcast. I always thought they taped the show around 11 anyway.

Just a quick comment before I go to the store.

It ought to be interesting on TWIN since Mikey finished ahead of Biff in the race. And he's ahead in points too. Woulda thought?

To echo VickyD, I thought they taped at 10ish.

They are going to wait until Waltrip shows up. Couple of red flags or a shower and it could get interesting.

The way Michael drove today, he'll be fine on the drive back.

When I first read your comment about about red flags and a shower, I thought "I know Mikey is tall but how much time does he need to take a shower?"

Then I realized you meant a rain shower on the track.

The worst that could happen is that the show is live, but even that isn't THAT big of an issue.

I'm watching VL. I noticed gaps in the stands. I don't believe the crowd was mentioned during the race.

I have an idea to make the stands appear fuller. The track personnel should tell the fans, that once the race starts and it looks like your seatmates aren't coming, spread out. It would look better for TV.

Vicky & Dot--they use to tape at 10ish but on one of the shows back in 2K3 they made mention that they were taping at noon. I *think* it was about the time that Mikey found out about the Monday Morning Meeting which started at 9 am. Because if I'm thinking of the right show, Mikey mentioned that he doesn't have to rush out of the MMM to get to the studio and it makes lunch plans easier since he doesn't have to wait for folks to get there at lunch time. So unless they've changed, I think they still tape at noon.

Can it be that Mr. Waltrip has no friends that would do him the favor of flying him the relatively short distance back to Charlotte? That sure is surprising to me.

I am certainly not a fan of Waltrip's TV persona. But, he is a part of a pretty tight community of the racing "brotherhood". I would think that someone liked him enough to help him out.

Makes one think hmmmmm, doesn't it?

I'm with you Rockin Rich. There are a lot of people still in Mville for the race. I'm sure he can hitch a ride.

Mikey really doesn't have his own helicopter?? This is suprising to me....seriously! And being that I AM a huge fan of his on the track and tv I am personally looking forward to a GREAT day of Speed Channel viewing today! I would be disappointed if they filmed TWIN without him, if I tune in and see his seat empty I turn it off normally.

I too think that the Speed crew could do the telecast without Mikey and that would not necessarily hurt my feelings too, even though it might make TWIN interesting tonight.

Sorry, but no Mikey...no TWIN! I just delete it from the DVR.

There isn't alot of money to be made in the truck series so it isn't likely that any of the drivers other than Kyle Busch and Kevin Harvick have helicopters, so Mikey would need to ask one of those guys for a ride. But all Mikey has to do is get a police escot out of the track and then he can be at the Speed studios in less than three hours, more likely two.

I'm watching SPEED. Looks like it will be a good race. Here comes ROWDY