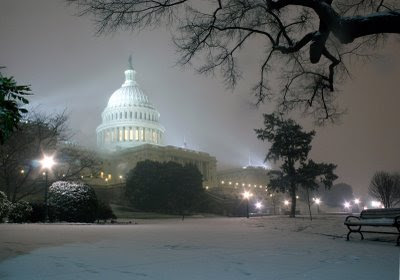 Kyle Busch was very happy about winning the Sprint Cup Series race on Sunday afternoon. In Victory Lane, he spoke with the SPEED TV crew and told them something else he was happy about.

All the NASCAR team planes had been grounded because of the weather back in the Concord, North Carolina area. Kyle got another night in Vegas.

While this might make for some interesting sights in the casinos on Sunday night, there is something else that the weather is probably going to affect and that is the Monday TV shows.

Chad Knaus and Michael Waltrip are supposed to team with host Steve Byrnes for the Monday version of This Week in NASCAR on SPEED. The show tapes Monday afternoons at the new SPEED HD studios on Harris Blvd. in the Greater Charlotte area. That program would seem to be in big trouble as even Byrnes was in Las Vegas working on the Fox telecast.

It may well be that SPEED gathers the three parties together in Las Vegas, as the snow is expected to continue most of the day on Monday. There are certainly several facilities that could host and uplink a show on short notice in that TV-friendly town.

Update from SPEED: Ralph Sheheen will step-in for Steve Byrnes, but both Michael Waltrip and Chad Knaus made it back to Concord, NC and will appear as scheduled.

Over at ESPN, the Monday version of NASCAR Now might be in a little better shape. Nicole Manske is filling in for Allen Bestwick this week and she is already at ESPN. We also know one of her panelists, Ricky Craven, is already in Bristol, CT as well. Craven was the analyst on the Sunday morning version of the show.

The two other folks scheduled for the program are Randy LaJoie and Ray Evernham. While neither of them was in Las Vegas to our knowledge, both of them are regularly in the North Carolina area and the East Coast travel corridor is a mess.

It may well be Manske and Craven again on Monday night. These two have a great on-air relationship and the Sunday morning program was perhaps the best of the pre-race shows in terms of racing content.

Update from ESPN: All hands are on deck and the show will proceed as scheduled with Manske, Craven, LaJoie and Evernham.

Thanks to both ESPN and SPEED for providing the updates on Monday's TV shows.

TDP welcomes comments. This is a family-friendly website so keep that in mind when posting. Thanks as always.
Posted by Daly Planet Editor at 10:30 AM

Cool picture on the blog.
I for one will be looking forward to the TWIN update. I have missed the "ODD COUPLE" aka Chad and Mikey this year. And it was an odd race for Jimmie.

This show just just SCREAMS POTENTIAL for comments/teasing by Steve and Mikey. :-)

This situation is very interesting, I first commented on this in the last column, and I think TWIN will be live from somewhere other than SPEED in NC - which is interesting.
They can't use anything that SPEED used this weekend because the SPEED TV trucks most likely are already on their way to Atlanta, and by the time they get there, the weather will be fine. So...
JD, can you fill us on these locations/studios where TWIN could go live from and who these locations would be run by? Does NEWSCORP (owner of FOX and SPEED) have its own facilities already in the Southern Nevada Region?
OR...how about this? The team could defiantly take a short flight to LA and do a show at the vast FOX studos there. How probable do you think that is?

FWIW, John, the Hendrick planes got back to Charlotte via Wichita around 4 AM. So Knaus should be available; whether he's awake or not is another question.

JD,
Just checked and Charlotte Douglas
International is open and only delayed 15 minutes.

Thanks to both SPEED and ESPN for updates.

All hands are on deck for NASCAR Now. Show will proceed as scheduled. Manske, Craven, LaJoie and Evernham.

Over at SPEED, Steve Byrnes commercial flight did not make it back in time. Ralph Sheheen will step in for Byrnes while Waltrip and Knaus did return and will be on the show as scheduled.

Thanks again to ESPN and SPEED for the info.

thanks for the updates, JD. Since I stayed home for a snow day, maybe I'll have the chance to watch.

Thanks to SPEED and ESPN for providing the update to JD to keep us informed to the program schedule for on air talent this evening.

Looking forward to NN w/Manske and crew. Manske and Craven were great on Sunday morning. And the review w/chad on TWIN on the end of the race with the 48 and the Why was the red flag not out and left us with a G/W/C. Makes me wonder.

Has Ralph hosted before? I wonder how the dynamics are going to be between him and Mikey.

No Steve? BUMMER. I can't imagine Ralph filling in on this show unless he did years ago and I missed it.

Hopefully the Odd Couple will have lots of chatter.

I am quite sure that with all that happened this weekend with the busch and cup races, that chad and mw will have plenty to discuss and chatter about tonight no matter who the host is. I guess it depends how ralph leads the program with his insight and comments. He is very knowledgable and am confident he will fill in well for steve this week. I will watch TWIN on the reair tuesday morning.

I don't recall Ralphie ever doing any incarnation of the IWC shows. I do look forward to seeing how he does. I think he'd be a fine host just wonder how he'll be able to control Mikey.

And it's Monday afternoon and still snowing in Va...
Hope everyone can make it to the Studio for the taping in NC! Looking forward to hearing what Chad has to say about the race, and Mikey's explanation of what happened to his car. Go Reutimann! What a great finish!

(This just in from Charlotte..NC)BECAUSE OF INCLIMATE WEATHER:DIGGER AND FRIENDS WILL BE HOSTING NASCAR NOW::UPDATES WHEN AVAILABLE:::

ok i have directv and it says when im on speed channel that it cant find the satellite signal. speed is the only channel its doing this for. so possibly the snow is messing with speeds transmission if TWIN.

ok its on now

starting at 8:19 THE MUSIC IS INSANELY LOUD OVER VIDEO.

CAN NOT HEAR THE BOYS.
SOMEBODY TURN DOWN THE MUSIC.

can no longer WATCH as IMPOSSIBLE to hear the TALKING OF THE BOYS!!!!

Somebody help ! ! I'm going deaf with the horrendously loud music.

Though the guys were supposed to talk about the videos -- but if they are we can't hear them.

Forgot to add that Ralph is doing a commendable job.

yeah its impossible to hear them talk during the videos. and that thing on mikeys face is growing life

besides the loud video music, a good show. sheheen did a respectable job

There is a new column up for your comments on the Monday edition of TWIN.