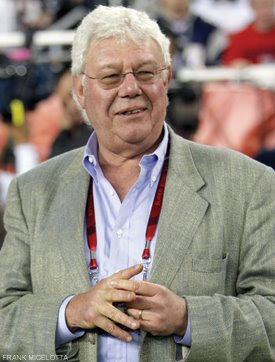 The creator of Digger has now turned his efforts toward the Internet. David Hill of Fox Sports has a problem. The Foxsports.com website has been struggling for years now. He has some ideas for solutions. Here is an update from MediaWeek:

Fox Sports chairman David Hill believes the Internet is following the same evolutionary pattern as television. “When TV was in its infancy, it was basically run by the engineers,” says Hill. “Technology innovations were driving it, until finally the programmers began to take over. And that’s when television took off.”

Hill believes that for the past 10 years or so online media—particularly sports sites—have been overly controlled by techies, or engineers, as he calls them. And because the programming executives have for the most part gone along with this, just about every sports Web site looks the same or offers the same basic content and design.

“All of these sites, including our own, are dominated by highlights of games from the night before and interviews of players talking about games that already happened,” Hill says. “Everything is past tense.” And most of the sports sites feature a preponderance of sportswriters, rather than television sports commentators, he adds.

While these sites do have some prognosticators who, via video, are discussing future games or longer-term trends, Hill believes there should be more cross-pollination of TV sports commentators on FoxSports.com. He also wants to inject a little more irreverence into the commentary to offer viewers a distinct destination.

“FoxSports.com is not broken,” Hill points out. “We are in a good place right now. But we need to bring more innovation to the site. Right now, most content on sports sites is past tense. We want to make it more forward thinking.”

Currently, while just about all of the Fox Sports NASCAR commentators do video reports on the site during the racing season, the only other Fox Sports TV reporters doing extensive online video are Ken Rosenthal, who is a field reporter for Fox baseball telecasts, and Jay Glazer, a former New York Post columnist and now senior National Football League writer for FoxSports.com.

Once his on-air talent is entrenched on the FoxSports site, Hill plans to slot promotional spots on each of the Fox Sports TV telecasts to alert viewers of the online programming and drive them to the site. Hill says he hopes to also beef up the fantasy sports area and “down the road” wants to offer more video coverage of sports at every level, including high school.

Hill says the entire redesign and inclusion of new video content could take up to a year to be fully implemented.

Click here to read the full story from MediaWeek.

Many of you have emailed and commented on the lack of quality NASCAR websites that bring you the up-to-date information without a TV network or corporate agenda. Fox Sports is a leader in sports website volume, so it should be interesting to watch what changes they make. The NASCAR.com changes recently made got both positive and negative comments, but drastically changed the ability of many fans to get the information they want in a timely fashion. We will provide updates on the NASCAR changes from Foxsports.com as time goes on.

TDP welcomes your comments on this topic. Just click the comments button below to add your opinion. This is a family-friendly website, please keep that in mind while posting. Thanks for stopping by, TDP will be live blogging the Nationwide Series race later on Saturday.
Posted by Daly Planet Editor at 12:03 AM

Hopefully he is better at this effort than the glowing hockey puck, rodent junk he has crammed on us.

Actually I bet he makes NASCAR almost invisible - like the other TV partner (bspn) did.

I disagree with much of Hill's premise. The internet is not being driven by engineers or techies at this point. They may be enablers, but they aren't driving the content.

The internet is the most democratic of all the media. It offers site creators relatively easy access to the world. Sites like TDP would never exist in the corporate world of television/radio/traditional print. Thanks to JD and his tireless work, we have this site to have wide ranging discussions. It has developed a following of devoted fans, and I am one of them.

And if the DP isn't your thing, there are many others for you to try. If you think of something new and feel the urge, you can establish your own site and content. It would seem the only limit is access to copyrighted material.

Ultimately it is the fans/users who decide what they want. They vote every time they decide whether or not to visit a site.

Mr. Hill has shown an arrogance and disregard for fans, at least when it comes to NASCAR. He believes he knows best; and if the fans disagree, his response is "tough". If he has the same attitude on the internet that he shows in television, it doesn't look good for the NASCAR fan.

@Anon 1024 - Hopefully Hill will be better at web design, since he is a wash out at PR & NASCAR. Remember the glowing hockey puck? So if this is to be his grand vision for the web - well Fox.com will fade into the sunset.

Has he been to Speed.com? I doubt it! His 2 websites are a mess! He needs to fix his own website problems before fixing anything he may wish to fix himself!

I agree with you on a start your own website - thats how Jayski ( pre-bspn) started.

Actually the "indie" websites are much better - as they cater to 1 subject & do it very well!

As far as engineers ruining web, what can you expect from him? Coherent understanding of something he pays no mind to is way to much to ask for!

So when he screws up - we all get to vote with our rodent (mouse) & not click on it! While saying Tough.

To me, "forward thinking" sounds like "promotion", "advertisement" and/or "hype". If done right, 360 degree coverage of a sport could be interesting. Unfortunately, we already know what it looks like when it's done wrong. It's called ESPN.

Hill's arrogance makes him believe that he is not only always right, but the salvation of all things.

In the early days of radio, the medium was seen as a great equalizer ... everyone who wanted to could transmit (albeit at low power). Once the corporate giants got involved (like Sarnoff and his RCA), the entire medium became a sales venue .. and they did it by using the government to end low power broadcasting. Clear Channel did the same thing to radio again in the early 1990s when low power FM stations started to blossom ... the FCC did their dirty work and killed it off. We all know what ended up happening to FM radio ... homogenization and the single path access for musicians and content providers.

Dogs like Hill want to do the same to the net ... they'll tell us that it's too important to leave to the amateurs, and that the bandwidth will be too precious to waste on anyone but themselves. They actually won't tell us this, they'll tell the FCC and Congress and those criminals will hand it over. ... a la the Telcomm Act of 1996.

As much as I hate to admit that Mr. Hill is right(cough), the FOX Sports website is a mess.

It is cluttered and disjointed -- and I'm only talking about the NASCAR part. Video is nice, but only if you have access to a highspeed connection.

Even if it is re-designed, I probably will not patronize the site.

I expect Mr. Hill's efforts to improve the website will be a disaster. He is out of touch with the real world and we will see stuff we don't want and will go elsewhere once we have experienced it.

Dave Hill is an idiot.

Yeah, I don't want to go to a website to see all those highlight clips and interviews -- I want to see commercials for upcoming programming.

Seriously, this is what happens when you get into a position where no one around you has the courage to tell you "no". Dave Hill needs someone to sit him down and explain to him that websites are not controlled by "engineers" and that if he was a sports fan who actually used sports websites, he might begin to have a clue what someone who goes to these websites wants.

Michael Jackson is dead and Dave Hill walks around with his heart beating perfectly.

Where is the justice in this world?

I check the FOX Sports website daily, for racing and other sports, and find it far superior to ESPN's, which I check only to see what Ryan McGee, Marty S, and recently David Newton have posted. The one problem I do have with the FOX site is that several of its writers - Lee Spencer in particular, who I no longer read - are consistently, overly negative and appear to me to feel that facts should not interfere with a good story. This year I am reading NASCAR.com much more than in the past, primarily because I find David Caraviello to now be doing some of the best writing about NASCAR and not limited to 600 or 700 words.

I can see it now. You'll click on the NASCAR tab on Hill's new and improved Fox Sports web site and you'll get a 30 Flash video of a Digger cartoon before you can view anything else. I think Mr Hill knows where the NASCAR fan wants him to stick Digger. Except his head is already there.

Sounds to me digger hill wants the internet to do to post event coverage what the networks have done to it. seems pretty much all sports, especially racing, hours hours of pre event hype and minutes of post event coverage. Maybe he sees the writing on the wall that eventually the internet is going to take over broadcast tv and the people in charge need to figure out how to survive when it happens, unlike newspapers which are rapidly fading from existence. sorry to ramble but the thoughts in my head just don't translate to what i type like i wish they would..wonder if a generation of people will ever come along that requires not only book smarts but also common sense as a job requirement for an executive. Can't expect much from a man who's vision of expanding nascars fan base is shoving digger crap down our throats

If Hill thinks he's "saving" NASCAR with the gopher cartoon (and liked the glowing hockey puck), then I cringe at what he will think will "save" websites.

One thing is for certain: He's very confident that he's the smartest guy in the room...which ensures that he is not.

This is very telling, but hardly surprising insight to Mr Hill
When things to to "hell in a handbasket" (like his tv ratings) he sets out on a mis-direction initiative, It aint the programmers fault, it the 'engineers' who build this crap. Right.
He pulled the same stunt about High Definition tv and blamed it on engineers, all the while he was unprepared for the added cost to produce HD product. So, of course old 'Hilly' ain't to blame for his lack of planning, its those pesky engineers who forced HD down his throat.
Notice that nowhere, does Hill mention the needs or wants of consumers. Its all about him, and being 'forward looking'. Right.
Maybe someone should tell hime that the internet has been around now for almost 20 years.

What else would you expect from someone who thinks a groundhog is cutting edge.

How does this guy keep a job?