Did ESPN Make Your Heart Race? 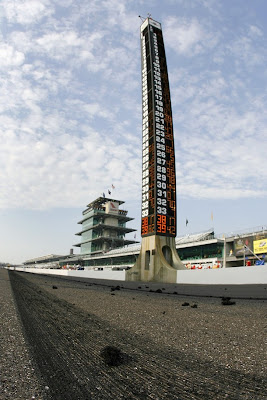 There is little doubt that when ESPN commissioned documentary filmmaker Doug Pray to create a thirty-minute preview show for the network's Sprint Cup Series coverage it had any idea just how bad NASCAR fans needed a program like this.

Feel Your Heart Race was a simple little show that effectively mixed the words of fans with those of select drivers and other NASCAR personalities. Jeff Burton was featured as the driver whose comments were spread across the entire short film.

The NASCAR Now producer struck a nice balance between offering fans information about the upcoming race and celebrating the speedway itself as a truly unique slice of American history. From taking on the Goodyear tire issue through reliving the resurrection of the speedway after World War II, this program raised the bar for NASCAR television.

The fact that Dale Jarrett was back on the air for ESPN was a godsend. His role in this coverage from studio shows to live races cannot be overstated. He has quickly become the franchise. His boundless enthusiasm for Indy, his history in winning at the speedway and his ability to relate to TV viewers is the cornerstone of ESPN's NASCAR coverage this weekend.

Pray and his film crews did what no other NASCAR TV partner has done this season. They discovered that NASCAR fans have voices, personalities and can complete sentences. Pray wandered into the infield at Daytona and brought out the type of real racing history that has zoomed past Fox, TNT and SPEED for years now.

The faces of these fans did not paint a profile of idiotic drunk rednecks, but of passionate sports fans from across the nation and beyond. These people looked like you and me for one simple reason. They are us. The readers that come to this site, the fans that tune-in every racing weekend and the families who still make vacation plans around NASCAR races.

This season, NASCAR fans have almost seen it all. NASCAR on Fox decided the lasting memory for fans would be of an animated creature whose job was to sell t-shirts. Darrell Waltrip got caught up in the Digger hysteria and never recovered. TNT lost their play-by-play announcer halfway through the summer six pack.

Jeremy Mayfield continues to detract from the racing and on Thursday afternoon DeWalt Tools thanked NASCAR and Roush Racing for over a decade of exposure for the company and walked away. The potential for other major companies to depart at the end of the season looms on a racing horizon that has not yet lightened.

Yet, there on ESPN2 were the smiling faces of Americans happily taking the time to speak to a camera while putting up tents, watching Daytona practice and walking through the infield. All shapes, sizes and ages of folks happy to be at a race and supporting their driver.

Pray and his crew didn't do anything but let people talk. Random comments, funny moments and serious topics mixed together to produce the drama that is NASCAR racing. Fans who have been to a race know that meeting other fans is simply a blast. Casual conversations turn into friendships, photos and phone numbers.

Friday, the action begins for all three of NASCAR's top series, but the focus is clearly on the Sprint Cup teams at IMS. For both NASCAR and ESPN, this is the moment to begin to get things going in a positive direction for the rest of the season.

In terms of getting that flow going, both NASCAR Now and Feel Your Heart Race delivered just what was needed. The complete TV schedule for the Indy racing weekend is listed on the right side of The Daly Planet main page. We will be live blogging the TV coverage of all three races. Join us if you can.

In the meantime, what was your reaction to the two Thursday programs? To add your opinion, just click on the comments button below. This is a family-friendly website, please keep that in mind when posting. Thanks for taking the time to stop by.
Posted by Daly Planet Editor at 9:45 PM

ARGH! I missed it! Is it re-airing?

That picture is creepy looking - the scoring pylon looks like it needs some ExTenze from last Saturday night's ESPN2 Nationwide race.

Dang it. I thought I recorded it. Looked into the future and did not see it listed.

One of the few times JD gives a show a thumbs up and no re-air to be found. Anon 9:59 and I don't live right.

This happened to me with Ride of Their Lives. I missed two tapings of it and then it was gone from the schedule. I eventually caught a late-night re-airing, but dang-it.

CNBC is re-showing that stupid "economics of NASCAR" piece multiple times a week and probably will for months to come. Why can't ESPN re-show this thing ONE MORE TIME?

Anon, I think perhaps the story is the rubber on the track. Or, at least that is what I was trying to point out.

Right now, it does not look like this will re-air. Let me ask ESPN if they can make it available on You Tube or ESPN.com soon.

Will get back to you all Friday.

@ Anon 10:21, BSPN is showing the ESPYs again. And hey, there's that boxing match from 1971 on tomorrow night at 6PM PST. Fishing more to your liking? Bassmasters is on at 2AM Saturday.

JD, I read you after I sent mine. My point is that BSPN has 30 mins to re-run this. Even on BSPNCL would be good.

When they were doing the piece on Tony Hulman buying the track after the war, if that was Mary Hulman George, she was a beauty. Anybody here know?

It was an OK piece. But I was disappointed that it didn't focus on Indy----it was more Daytona. The fact that they did speak to fans who could speak in complete and coherent sentences was a big plus. And they did manage to show the fanatics in a decent way rather than show them as kooks or wierdos.

I missed it but things have been nuts around here with most complicated/unusual/ongoing/intermittent cable box issues. Underground utilities adds to mystery.

I gotta say, that picture is a bit odd but if I said why, would not be ladylike or prudent.

I answered my own question about Tony Hulman's wife, whose name was Rose. She was so beautiful. Mary (Mari) Hulman George is his daughter. Four children and only one grandchild, Tony George.

Sophia and anon @10:10 p.m., I had to take a second look at that scoring pylon. And, Sophia, I know exactly what you're thinking.

Take it from a diehard nascar fan since 1985. This was the best documentary about nascar, I loved the part where the lady says your heart is in the car with the driver...so true

@ dear Sophia, shame on you. I had to check the picture again after JD mentioned the tire boogers on the track. We may be old, but we ain't dead.

I have been watching the Indy 500 for years, and not once have I seen the history as shown today!!Great job,looking forward to a Great weekend of Racing!!

I haven't seen the show yet but I am sure it cannot live up to the commentary here.

I virtually never check ESPN Classic, but if this show does not re-air there, what do they show to fill time - except maybe for the last race at Riverside which I have watched parts of only about 10 times, and enjoyed.

Richard in NC, you have a good point. Weather on NN today or yesterday said 90% chance of rain Saturday a.m. Q'ing is at 10:00 ET. So maybe if that happens and then drying the track, they'll reshow it.

Dot, it's awfully early for you to get up for Q'ing. But I'd tape it just in case.

JD, Thanks for posting the broadcast schedule otherwise I wouldn't have set the DVR.

"Feel Your Heart Race" really got me stoked for some exciting racing but I'm not sure Indy is the right track for that. Did find it ironic that BSPN doesn't broadcast a race from Daytona yet most of the racing footage was from that track. Enjoyed listening to the drivers describe their thoughts and actions at the moment of impact in an accident. Brad Keselowski impressed me as a well-spoken young driver especially when he described keeping the rush of adrenaline in check so that it didn't interfere from using his brain to make decisions behind the wheel.

As a fan who goes to several races a year, I could totally relate to fan comments on being at the track versus being on the sofa back home.

Here's the sad part.
It takes a commissioned free-lance documentary producer to do the job that ESPN's entire NASCAR coverage team is incapable of doing

ESPN should be embarassed, not proud

I am certainly hoping that this serves as a wake-up call for ESPN, SPEED and the NASCAR Media Group in terms of producing more programs like this.

We saw part of it since there was a bad rain storm here in Houston we had intermittent broadcast issues. I suppose the Hulman family is related to the Rose-Hulman University some way. Many of my co-workers have attended that great school. I couldn't believe some of the old pictures but let's hope (fingers crossed) the races are fun and exciting.

I was glad to see Indy history aired. Still shocking to see the state of the track before restoration. If only some other "historic" tracks could be revived the same way.

I had a bit part in Feel Your Heart Race, from Daytona, and I'm happy with how it turned out. Brad Keselowski, especially, presented himself in a way that connected with fans. Good PR boost for his full time Cup ride campaign, can't wait to see where he lands.

The title alone sealed my decision NOT to watch. Cheesy at best.

And I forgot until the re-air on NN that it was an hour long! (I still didn't watch the whole thing) I shut it off after some demonstration 'bout tires (yawn)

I thought it was a well-produced piece. I understand the reason to air this days before their first Cup broadcast of 2009, but I don't get why ESPN had all shots of Daytona. If they were smart, they would have gone to Indy last year and made the interviews and such. Of course, maybe they did and were just to embarassed after last year's debacle.

All in all, something someone who doesn't get NASCAR should watch. Maybe it'll persuade them to go to a race, or at least think of some of the things those interviewed said when watching a race on TV.