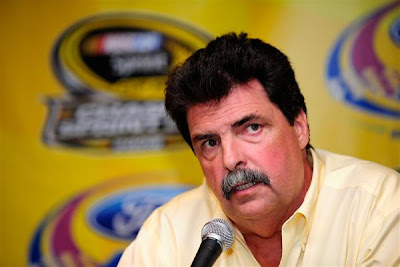 TDP invites your comments on this topic. Just click on the comments button below to add your opinion. This is a family-friendly website, please keep that in mind when posting. Thank you for taking the time to stop by The Daly Planet.
Posted by Daly Planet Editor at 9:00 AM

Would rather see him on Trading Paint opposite Jenna Fryer -- but TWIN sounds good, too.

This will test the mettle of Speed as it pertains to whether they can be an advocate for fans and ask Mike some real hard questions and harder follow up.

I expect one softball question after another, though. punctuated by panelists' cheeleading about how great the sport is.

I don't care for Spencer, he puts his foot in his mouth way too many times. Waltrip may be annoying at times but he knows his Nascar, so it will be interesting. Neither of them will be too outspoken though with Helton on the show. Ya just can't be yourself with your boss hanging around lol

since my nascar viewing is pretty much limited to the actual racing & i won't be home from work in time to catch TWIN, i can't comment on it.

BUT that has to be one of the funniest photos you've put at the head of a column EVER! at first glance, i thought it was helton w/kid who's a mark martin fan! it took a cup of coffee and a second look for me to see who it actually is -- and then it was even funnier!

thanks for the day-starting laugh, jd -- however unintentional it may have been!

Too bad Helton isn't on NASCAR NOW instead. Unless Chad Knaus is there, it will be a waste of time, as that group will not as any good questions. Especially Spencer and MW.

I've always wondered if the Chase is so great (and I think it is), why don't they do it in the other 2 major touring series. Would like to see them discuss that with Helton.

Two active drivers (including 1 chaser) and Steve Byrnes asking Helton tough questions? Please. Spence might say something a bit edgy but I doubt it. And even if any of them ask anything remotely resembling a question vs. trading inside jokes with him, Helton will play it right down the middle of the fairway. All is right with the Chase, the COT, TV coverage/ratings, blah blah blah. I may tune in for 5 mins or so just because I can't avoid looking at train wrecks. :-) Otherwise, its just on to Dover for me.

I've lost a lot of respect for Helton and Nascar for not dealing with the deficiencies with the COT. Before retiring, I spent my entire career in product development. Nascar's approach to the Cot seems to be"Here it is, you guys make it work" instead of aggressively working with the owners/teams to fine tune the concept to the point where it was a descent handling car. I'm sure Helton will spin a nice sounding story about why they will do nothing.

Anon 7:33 Waltrip knows his NASCAR. Do you really listen to him? If he knows things about NASCAR he doesn't show it. Maybe that dopey act gets in the way.Or just maybe that dopey act really isn't an act.Too bad Helton isn't on a better show, NN?

I hope they do ask him about the economic situation. Jack Daniels leaving the sport, the Petty-Yates merger is big news. Also entry lists are out for this weekend & they are weak. 44 for Cup (only 1 DNQ), 44 for Nationwide (1 DNQ & about 10-14 Start & Park teams entered), and only 31 for the Trucks (5 short of a full field & 7-8 S&P teams)

Bray, Waltrip is Nascar's number 1 fan and isn't afraid to yell it from the treetops how great it is and everything they do is for the fans either. One show several years ago didn't someone ask Mike what his salary was? Those are the supposed tough questions. There won't be any.

Asking a supposed tough question you know isn't important or won't be answered anyway is not what we are looking for. Asking Mike Helton what he makes for money is really a dumb question. You either get it or you don't get it. MW has proven over and over that he doesn't get it and never will. Try watching NASCAR NOW, Ricky Craven gets it.

@red--LOL! Yes I saw that before the change too funny!

@anon 5:27--that's my favorite part of Mr. Helton being on. His reaction to that question! He's always great about it and I want him to get funny with the boyz.

I tweeted JD that Mr. Helton should go to Bristol. Preferably after watching a race and asking what we do "how are you not embarrassed by that lame excuse for a race broadcast?" Heck we can give him all the questions to ask them! They need to set that up for realz!

My tv is broke waiting on a part. Could someone please do a transcript of the interview with him so I can know what he says. Thanks!

Jonathan I can't really do the transcript but Biffle asked great questions.

Gosh, where is everybody? I really enjoyed TWIN, was thrilled when Spencer left. I knew they wouldn't get into anything big with Helton, and I'm sure he knew the questions in advance, but I thought it was pretty good. I did have a flashback of Mikey behaving himself when Helton was there years past.

I have to admit that I do have a little extra respect for Mike Helton because after the races at Kansas, he and his wife always walk down from the suite thru the stands, across the track into the infield. He seems very accessible then, and he probably does it at other tracks too. I am only in the middle of the stands there.

It's not as bad as it was, but the volume still is low on the TWIN show. I know Mikey does get excited sometimes, but he's not THAT bad.

Back to DWTS, have already voted!