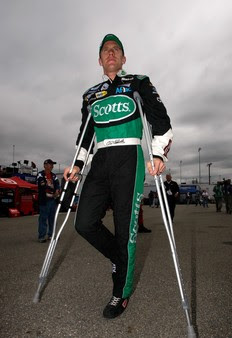 This is your opportunity to offer your opinion on the ESPN telecast of this race. To add your comment, just click on the comments button below. This is a family-friendly website, please keep that in mind when posting. Thanks for taking the time to stop by, this feature has proven to be very popular.
Posted by Daly Planet Editor at 9:45 PM

DJ seemed off some, but the adjustment for him must be jarring compared to JP. Andy was solid, we'll see how he does tomorrow. Liked the limited peek ins from Rusty and Brad, they really don't have much purpose once the race starts. Rusty not being in the booth is good because Steven and Brendan don't get over talked about which is a major plus.

However, I had one major issue tonight. They NEVER focused on a single driver outside the top 18 except for Carl at all during the race which was a crying shame.

Loved the decision at the end to stay with battles the last 20 laps and catch Carl at the very end of the race to finish. That is something I hope continues from here on out.

The Bad:
- Tailpipes, in-car cameras looking at the stands and not the track, bumper cams. Camera work was mixed.
- No chemistry. As I mentioned in the race thread, Marty Reid tended to dominate the broadcast. At Iowa, Rusty and Randy could reach Marty's level of excitement and their system worked very well. Dale Jarrett is used to doing play-by-play for Jerry Punch & seemed lost now that he only had to be an analyst. Maybe the long day was a reason for their struggle. A sepeate, full time Nationwide broadcast team is needed in 2010. Marty Reid, Randy LaJoie, & Rusty Wallace. No further experiments needed.
- Tech Center. Used once, (maybe twice?) all night. NASCAR 101 how to fix a tire rub was unnecessary. Any fan watching for the first time understands you must move the fender off the tire for it to stop rubbing. Waste of time and money.

I didn't catch much of the race today but from what I was able catch the camera angles were better. They provided wideshots and also focused on the racing at the back when the cars upfront got into a single file which was a good move by ESPN. Marty Reid was on top of his game giving updates, calling the race and not just reading stats like Jerry Punch does so this slowed DJ down a bit because this is what he does to help Jerry Punch. This coverage is not going to be the same for tommorow as it is going to be about the chase guys. So expect the cameras to focus only on the chase guys.

Sometimes it is more like a video game played by adults than a live telecast with some racing perspective.

Marty and Randy in the booth? Yes!
Rusty? Big fat NO!
No no no
I'm not related to Randy, despite my name.

JD, you are right about the video
game aspect. Why were looking out
the side window with a view of
nothing with ten laps to go? Still
too many low level shots when you have the perfect track to cover from a high & wide prospect.

Na$car 101 is a waste and insult
to real race fans.

I guess Marty is going to get called to the ESPN hauler and told to calm down just like the Doctor. I mean wow, Marty actually got excited at one point. Can't have that.

I felt the coverage of the actual race was much better than usual. The announcers stayed "on task", reporting action on the racetrack. The camera coverage actually showed a lot of the racing going on around the track, exactly what I am looking for since I can't be there in person. Yes, there is room for improvement but I enjoyed watching this race and didn't feel the usual need to shake the TV so that I could watch racing, not nonsense.

ESPN, I like Marty's excitement!! don't blanket him. The best race booth team the NNS could have is Marty, Randy and Rusty. Please consider them full time for 2010!

welcome back to marty reid: you were missed, sir!

and here's why: reid gets it. he gets excited by the same events that excite fans, he understands the sport and knows when to throw it to the analysts for comment, he keeps us informed as the race unfolds and he sets up the final laps very well.

postives last night:
* overhead shots -- altho' more would have been even better!
* showing the racing mid-pack in the last 20-some laps while the leader was running away with it -- and reid telling us that we weren't missing anything at the front while that happened.
* showing all finishers!

"developmental areas" last night:
* lose the nascar 101 mentality for the tech center. unless it's going to explain something unusual, we don't need our sport explained to us each week
* in-car cams need to go away, especially at a track like this where an overhead shot goves the fan much more information
* reduce the repeats of information thru out the race. telling us twice that edwards was fighting back from the back and why is useful: telling us that repeatedly thru out the race is not.
* i'm underwhelmed by the post-race reporter questions.
* as much as i complain about "specialty cameras," i freely admit i miss those brake cams at some tracks -- like richmond.

overall, i found myself paying attention to the race and the coverage and didn't bounce around various sites on the laptop to get information.

my choice for booth: reid, lajoie, and dj. actually, reid and just about almost anyone else espn wants to throw in there with him b/c he's such a strong PxP guy!

I thought it was interesting that Marty, (I think it was Marty's voice), talking about the fact that the Gibbs and Roush teams have won the lions share of races, and by far led the most laps. He made the specific comment that, for the people that ask, that is why they concentrate so much camera coverage on them.

Someone actually acknowledged that they are hearing complaints!

I agree with Anon 9/12 @ 8:26AM. I expect that Marty has been summoned to the BSPN hauler. However, I suspect it is because of his honesty. In addition to his comments about the coverage, I heard numerous references to the Start & Park teams, to the point of opining which teams were, and weren't Start & Park.

I think it would be really refreshing to have Marty calling the Cup races.

I was watching the soccer game on ESPN2. During halftime, they gave the TV schedule for all other Premier League matches that were on other networks! They even included the channel logo for Fox Soccer Channel an Sentana Sports.

Amazing, it can be done! Just spend 15 seconds telling viewers when / where they can watch the truck races.

No bottom ticker either during ESPN2's Premiere league games.

I think I'm suffering from Nascar Fatigue. I avoid much of the pre race baloney. If I see one more shot of Carl Edwards on crutches, just he crutches or questions about his feet,his gas pedal or anything realated to crutches, I'm going to throw up. Enough of Rusty. DJ was excellent last nite. Marty Reid couldn't keep track of who was leading the race at one point.

Marty...YES! He had a few slips, but with infrequent opportunities hard to be 100% on your game. Give him the gig full time. Add Randy L and whomever...even Rusty, dare I say.

Fix the camera work...what else can we say? Apparently not much because we have the same comments over and over.

PS...not sure who mentioned Carl's weak burnout, but he said it was weak because he didn't want to damage the engine :-)

BTW, I heard them say that so and so didn't have a CC on the box last night too.

Typical BS Espn coverage, as far as ESPN is concerned this is the Kyle Busch show. If your not one of the "big name" drivers your not getting covered it doesn't matter if you're running 3rd or 33rd .
OK Paul Menard driving for RPM in 2010 was news (OH wait did ESPN even cover that story?), but how does that warrant covering his imaginary battle for 11th in the closing laps?
Come on people Greg Biffle was a lap down, and got more TV time than drivers running in the top 10 .
It was 9/11 , but the only time we even saw Ben Gordon's 9/11 memorial car during the race was when Greg Biffle (laps down) pulled into the stall in front of Ben on pit road.
You want to know how to bring new/more sponsors into NASCAR, show them that they can get a return on their money (TV time) without having to sponsor one of the big $$$ drivers/teams.

I like rusty brad and allen in the pre race shows they are good. I agree with most about marty rusty and randy in the booth for nationwide but i think brad would be good also if they dont go with randy nexy year.

ESPN continues to improve. They took notice of the TBS broadcasts, which were head and shoulders above all. Genuine interest and enthusiasm instead of self serving FOX/Speed group hype.