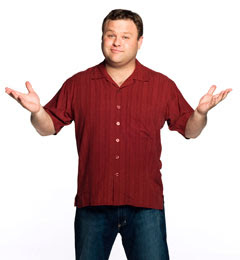 What are your thoughts on the host and other acts announced by NASCAR for the banquet? To add your opinion, just click on the comments button below. Thanks.
Posted by Daly Planet Editor at 11:47 AM

One word on the entertainment...marvelous!!! Caliendo and Pinette are hysterical.
Search YouTube for Pinette's "Chinese Buffet" routine. You'll laugh so hard, you'll cry...guaranteed.

So we have a comedian hosting, another comedian and 2 musical groups. How long is this banquet anyway 6 hours? Over kill in my opinion but then I'm only watching on TV. David Gray is good but I'm not sure about the fit and Escala WHAT. Should be some interesting TV. Thankfully we have Krista and Mike

Oh boy, a guy that does NFL impressions. Just what NASCAR needs. I've seen this guy on Jay Leno and he's okay as far as an impressionist goes, but for the banquet, I feel they're way off on this one. "He also has a strong NASCAR connection", where? I don't remember seeing him on anything NASCAR.

Do we really need musical entertainment at the banquet? They usually look like they're out of place while performing, like a church group in a disco club. I'm not sure who David Gray is but a female electric string quartet from 'Britain's got talent' is sure to get their toes-a-tappin' under the tables for sure!

I don't know but to me a good country act would have done just as well for the music and let Krista and Mike do the rest.

I'll watch, but I bet I won't like it. It's GOT to be better than what we've been getting. I wish they would do a "Roast" type banquet where everyone could let their hair down and let the jokes fly at the winner. That would be fun to watch if it wasn't scripted and read from a Teleprompter.

SteveL...perhaps you should take the time to read the whole blog before commenting.

"He was featured in several videos shown at last year’s awards ceremony and also has appeared at post-season events for both the NASCAR Nationwide Series and the NASCAR Camping World Truck Series."

NRF...IIRC, the banquet really is pretty long, we don't see it all. Didn't they always time it so we'd (TV viewers) skip the dinner part? I believe they do actually eat (and we wouldn't want to watch that, lol.) I don't know how it worked in recent years cause I haven't seen it in a while. Caliendo is pretty funny. Some of you may remember him from his satellite TV ads.

from what I've read, a lot of the drivers are fans of rap & hip hop & pop/rock music...*not* country. I would think that David Gray would be entertaining to a cross section of people.

I'd rather see Kenny Wallace, as a comedian, at least he is connected with NASCAR and is funny when he wants to be.

John McCain made a couple appearances at some races this summer but I wouldn't want him to made a speech at the banquet.

SteveL...I read exactly what you said about his connection...'where?'. And that question had already been answered by JD. Just because you didn't see it doesn't mean it wasn't there. Apparently you didn't watch last years' banquet or you have a poor memory. And he doesn't just to 'NFL' impressions. He does all kinds of people, as has also already been explained. I really don't care that much one way or the other, but it I am just surprised at how many people can't seem to keep an open mind.

David Gray was on with Conan O'Brien on the Tonight Show a couple of weeks ago. I thought he was pretty darn good...

This is one of those places where both NASCAR and television are put between a rock and a hard place. For those that are long-time fans, the overwhelming majority would rather see something more simple, country and "classic rock" as the musical entertainment, and a celebrity host well known to be a NASCAR fan.

On the other hand, there are many younger fans -- especially those in the desired audience demographic -- that would groan at the prospect of nothing but "old school" entertainment. To be honest, they deserve to be served entertainment-wise and there's nothing wrong with NASCAR and any television outlet wanting to attract and hold them as viewers.

As for me personally, the entertainment is not going to be enough to make me want to go out of my way to watch the ceremony. Perhaps I am the oddball in the Planeteer crowd but I long ago gave up watching these types of programs no matter the subject. Like most people, I was amazed the first few times I saw Frank Caliendo do stand-up comedy in how amazing his ability is to mimic the voices of famous people. However, it doesn't take long to see that the novelty wears off because his jokes have gotten thinner as the years have gone on. John Pinette isn't too bad but he's just not enough to make me want to sit through the same ol' same ol' when it comes to driver speeches and the other prefabricated content. David Gray doesn't bother me but he's also not somebody that would be found on my iPod even though I probably have one of the most varied playlists for somebody of my age (44). I am not familiar with Escala as I never watch any of those types of "talent shows." A quick run to Google Image Search reveals they are indeed easy on male eyes but it is again not enough to make this must-see-TV for me.

All in all, it could have been a lot worse. I believe that the presence of Mike Joy and Krista Voda will go a long way in making sure there is no "disaster" entry here on TDP with over 100 comments on how awful it was. However, I think that volume of response is unlikely anyway. I am sorry to end this by going off topic, but I think it is true and needs to be stated -- after a season that began with Fox's own stints of bad race coverage while treating us all like children and ended with the thud of yet another unexciting "chase" softened only by the monotonous tones of Dr. Jerry Punch's voice, I doubt that many people are going to watch this ceremony. Personally, I'll be watching the Mid-American Conference Championship game "on another network" as they always say. And, if I miss some hilarious moment, it's no biggie. Thanks to the Internet, somebody will slap it up on YourTube or Rapidshare and I won't have missed a thing.

I'm not familiar with a couple these people but, they seem pretty middle of the road for entertainers. That's a good thing. There is a mixed age group and maybe that's what they were going for. I don't think all 50 yr old Mark Martin types like hip hop.

@glen--IIRC in the past it's been about an hour behind to allow for commercials and edits. Which always sucked as we'd miss some speeches or get just part of them.

Yes they do their meet/greet and nom and then get the party started.

Just glad we're not ever going back to that place where they had people hanging from the ceiling.

Its the less of alternative evils but I am still not stoked about this. It makes sense in some ways since he is doing a local act and all so booking probably wasn't too terribly difficult, but this whole banquet has really gotten worse year after year after year.

Im sure he will do fine and he will probably be pretty entertaining, but I will be tuned into SIRIUS for The Stewy's

I would of much rather had Lopez but thats just me. Frank is ok, he was on the Steve Dahl show once here in chicago. Ah well i will be watching no matter what!

thanks, Gymmie...that's sorta like I remembered they did it.