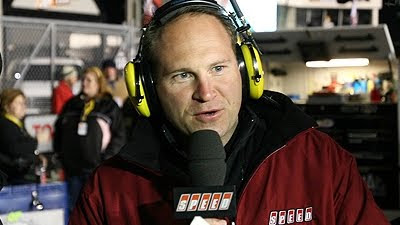 Thursday morning TNT confirmed the network's full line-up for the 2010 season. It will be Adam Alexander is in the driver's seat for the six TNT Sprint Cup Series races along with Kyle Petty and Wally Dallenbach Jr.

It was Ralph Sheheen who stepped in last season for TNT after Bill Weber's departure. Alexander was then added to the TNT pit road reporting crew to fill Sheheen's spot. Apparently, the network liked what it saw.

Click here for a 2007 interview with Alexander from the TruckSeries.com website. It gives good insight into his background and the hard work it has taken to get him to this point.

SPEED TV viewers have seen Alexander increase his presence on the network as well. Originally a Camping World Truck Series reporter, Alexander now hosts shows like NASCAR in a Hurry, The SPEED Report and Race Hub.

The one thing TV viewers have not seen Alexander do is the TV play-by-play on a live race. That club is rather small. Mike Joy, Rick Allen and Marty Reid are the charter members right now. Although we are still waiting on TNT to confirm it, it seems that Alexander is about to get the opportunity of a lifetime this summer.

Update #1: USA Today now says Lindsay Czarniak will host the pre-race shows for the six races on TNT. Marc Fein, the previous host, is busy with the NBA TV Channel these days.

Update #2: Ralph Sheheen will be back on pit road along with Matt Yocum and Marty Snyder. No information on whether or not TNT will hire a fourth pit road reporter.

What are your thoughts on this line-up? To add your opinion, just click on the comments button below. This is a family-friendly website, please keep that in mind when posting. Thanks for stopping by.
Posted by Daly Planet Editor at 8:00 AM

It's great. Adam deserves this opportunity and will make the most of it.

Disappointed for Ralph. He did a wonderful job in last years tryout. Was he a candidate who wanted the position?

Only time will tell; Dr Jerry Punch went from the pits to the sky box, and now is back in the pits.(no pun intended) Adam has that unique delivery of a story that keeps the view interested. Will this translate over to play-by-play I'm not sure. Adam may bring in a little missing magic(sorry Bill)that has been lacking in the booth. I also hope that Kyle Petty will also return to the play-by-play, and that Wally doesn't.

It remains to be seen what kind of a job Adam will do. But remember that Mike Joy, Allen Bestwick, and others started out in radio and started from the pits. I hope Adam will do a great job.

Good for Adam, I am curious though if Ralph was offered the spot and turned it down, or was overlooked all together. Either which way though I don't feel TNT could have gone wrong. It is a GREAT shot for Adam to get his face and name out there and I wish him the best. Will Ralph be back on pit road though?

Since he did this at local short tracks, I would think that that is the training ground you would expect someone in this position to have. I like Adam and hope this works out, but I like Ralph too. I guess it's nice to have enough quality broadcasters...

But will this mean he's leaving SPEED, or is he just a 'loaner'?

I wish Alexander nothing but the best. However, I also have to be honest and wonder why Shaheen did not get the position after doing very well especially on such short notice. TV is a strange world.

Ralph was kind enough to move up from pit road to help with the unfortunate situation last year.

Adam's selection should be confirmed by TNT shortly and at that time we will also learn who is returning on the rest of the TV team.

I do like Adam A., but Eli should have been the choice..

I wonder if Turner Sports will announce the other broadcasting teams in this same release. Ralph might host the NASCAR on TNT show before the race. That might be because Mark Fein will have duties with MLB on TBS or with the Braves. Adam deserves a chance. Ralph clearly deserves something more than just being a pit reporter after the great job that he did at Daytona, Loudon, and Chicago last year. As always, it will be interesting to see how all of this works.

@Richard - If they'd scored Eli Gold, plus bringing everyone and everything back from last year, the other networks would never have a chance to compete.

This is great news to me. I wasn't a fan of Ralph Sheheen or Bill Weber and I do like Adam. I'm really hoping he can pull this off.

I like AA a lot I'm very happy for TNT's decision on this. Poor Shaheen though.

I liked Ralph as well doing the PXP for TNT and am sorry that he won't be back, but as long as it means that Bill Weber WON'T be back, I'm willing to give Adam a fair trial.

I hope that TNT does as good a job broadcasting the races as they did last year. I wish they started this week.

There's an item in USA Today which says that Lindsey Czarniak of my hometown NBC affiliate WRC-TV will be the prerace host.

If true, congratulations are in order. She's very good as a host of local sports programs. Maybe Coach Gibbs can join her on set.

I like Adam so am happy he got the nod but did enjoy Ralph hopefully he'll get some more opportunities :).

I'm glad Adam gets the nod. He is informative, and makes you feel at home. That being said, I hope that doesn't mean that we are "at home" with a couple of friends talking through the race. I watch every now and then Sheheen on Speed with the Supercross, and man, I gotta tell you: EXCITING!He could make the first lap sound like the last lap with everyone three-wide! I truly do hope Adam shines in this position. PXP is a make or break deal in TV Land.Kudos to Richard in NC with the Eli Gold mention. Anyone remember TNN? I know it;s better to move forward than to look back, but wouldn't it be cool if the networks did a "throwback game" like the NFL does with uniforms, and put Eli in for one or two races, alongside Barney Hall? Ned Jarrett? Anyways, congrats to Adam. Make us proud Adam! Rememeber, we fans can get pretty brutal in our critiques....lol

Sounds like a good lineup but no info on the analysts/colour commentary? Are we to assume it will be Kyle Petty and Dolly Wayinback again?

I think tnt has the best announcers. I wish Wally Dalenbach was on Fox instead of Darrell Waltrip. You learn about racing on tnt. Thats what its all about learning about racing. About whats is really taking place!

What can ya say? TNT will be the best of all of them no matter who they put in the pxp spot. Adam will do fine, and all the pit reporters are also really good. Don't suppose TNT could start early, like the next race.

Don't get me wrong, I'm sure Adam Alexander will do a good job.....however, I am extremely puzzled by this move.

Sheheen was EXCELLENT in his few races last year and I (and MAYBE others) had assumed he was a shoe-in for this year.

I'm anxious to hear the reasoning behind it.

I heard that not only will Adam Alexander be the ply by play announcer, but Wally and Kyle will be back as well and it will be really interesting to see how well their chemistry works together.

They should have stuck with Ralph.

This could be good. Linds will be a great host. Adam I am sure will be a fine play-by-play guy. Mark was good at times, but I think he looked ready to do other things. I wonder if they will bring in Ray Dunlap as the fourth pit reporter. He was good when he was on ESPN.

I don't know why they keep putting pit reporters in the play-by-play position. Calling an interesting play-by-play and melding images with words and keeping viewers informed is an art to itself. It's a whole class of sportscaster, and it really has zero to do with being a good pit reporter.

I wish these networks would wise up and get a talented play-by-play man in the lead role and then surround him with color and analysis. Any expertise a pit reporter learned while being a pit reporter isn't going to help them call the action and help make a race exciting for fans.

Best of luck to Adam Alexander, seems like a good and hard-working guy. TNT had the best chemistry last year and hopefully his will be a seamless transition. Ralph did a great job in a very tough spot last year.

I'm concerned about Lindsay Czarniak (sp?) don't know how she will work out in the pre-race show, but maybe Bill Weber can do some juggling just to get his face out in front of the camera again. I can't believe he's still gone after almost a year I would have thought that the two could mend the fences by now.

I wish AA all the best. He was decent as a pit reporter, as I am hopeful.
However, I am sad for Ralph. He did a fantastic job, and deserved to be treated better.
Looking forward to seeing more of Lindsay too. See what they did Fox - they got someone good who knows Nascar to present their pre-race show. Neat!

What abou Ralph Sheheen? Was he not offered the job? What a chance they are taking on Adam Alexender seeing he has no play by play experience.

Hmmm had fun w Ralph on TNT so this is a strange move to me! But hey im always game for something new and fresh! Good for Adam he must be on cloud 9!!!

I also wanted to see Ralph get the play by play gig. He does do a great job with motorcycles and did so last summer for TNT. But I agree with MRM's post. Those old MRN guys do well with PXP on TV. Mike Joy and Allen Bestwick sitting alongside Barney Hall in booth is the best education any budding race caller could get and Adam Alexander's work on MRN was excellent. Great post by Richard in NC, I didn't think of Eli Gold. And Garry's post was spot on about Ralph and I also remember TNN. The best TV booth ever assembled was Eli, Buddy Baker and the late Neil Bonnet. That was good stuff.

I think this is excellent news. Hopefully Alexander will turn out to be a good choice. It was always such a chore to get through watching Sheheen struggle through an F-1 race. (It would be hard for lots of race announcers to stand up to comparison with Bob Varsha.)

Petty was a good addition to that group, and Dalenbach didn't annoy me as much as he did with Webber and Parsons. This could turn out to be an even better brief stint with TNT.

I also have hope, instead of dread, for the ESPN stretch.