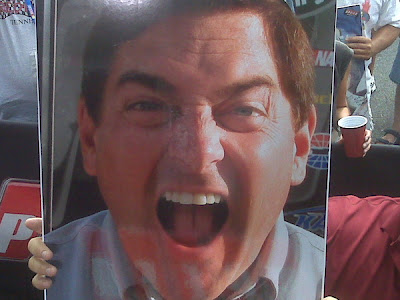 Thanks again for stopping by, we will be live blogging the entire FOX and ESPN2 race telecasts later in the day.
Posted by Daly Planet Editor at 11:24 AM

This should be interesting!

I'm here thru RaceDay, then off to a play. I have NO intention of taping the race.

What??? OK, so it's raining and there will be no racing for hours. But, it's NASCAR.

ESPN was a pleasant surprise during rain delay. That won't happen w/Fox. I'll pick it up when I get home.

According to The Weather Channel, there's only a 15% chance of rain until around 5pm when it goes up to about 30%. And if the Nationwide race can't be run tonight, tomorrow afternoon looks pretty good as of now.

What a cluster for the teams.

Great point reminding us of the G/W/C finish possibilities.

Race has to get started first.

Bruton, please don't learn to be hyper like KW. It's irritating.

What is this music playing in the background when they interview drivers?

Other than annoying? No clue!

Don't know where the rain is coming from -- all the radars I've checked don't show a thing. *sigh*

If the N'wide doesn't go off tonight, it will be hard for them to get to Talladega on Tuesday. They check in early Wednesday morning.

Are the jet dryers going? The rain may stop, but the humidity will stay around. Will take at least 3 hours to dry the track with all the moisture in the air.

Anon@12:43 --
Last report I had from a friend at the track, the driers had been pulled.

The stopped the jet dryers a while back when the rain picked up. That is the last I heard. Moisture and humidity everywhere...yech.

Wunderground has the weather forecast at a 70% chance of rain until 10:00PM tonight. If they are able to get the race in, I don't think there is a chance for a GWC. They hope to get to halfway.

This is a pretty interesting piece w/Jeff Burton.

Kenny Wallace just made absolutely no sense when talking about Martin, Kahne, and RPM.

I don't expect sense out of a Wallace or a Waltrip.

So was that the big contreversy from KW? If so, what a let-down.

KW make sense?
That's an oxymoron is I ever heard one.

This Afternoon
Cloudy with intermittent drizzle and a chance of light rain. Patchy fog. Temperatures steady in the mid 50s. Northeast winds 10 to 15 mph.

Should be "if". Trying to type and hold a cup of coffee.

Multitasking Franna? How big was the spill?

Who is chad kidding, he's getting 4 at the end of the race.

JD, managed to limit the spill to my shirt. No keyboards were harmed in the process.

Against my better judgment I tried to get through RaceDay. It is unwatchable as long as Kenny Wallace is on the set.

I spilled milk on my keyboard. A lot of people have told me they have put their keyboards that they spilled something on in the dishwasher and it fixed them. I've been too chicken to try it.

Yea JD, I know I'm going off topic, but it is a rain delay!!

Did you see the rain tires behind Dale Jr's crew chief when Wendy was interviewing him?