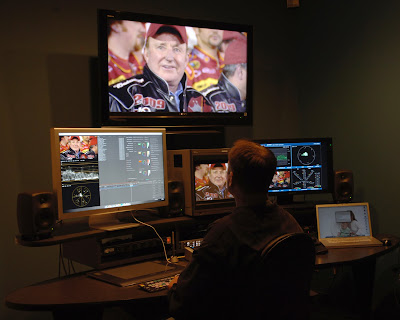 We welcome your comment on this topic. To add your opinion, just click on the comments button below. This is a family-friendly website, please keep that in mind when posting. Thank you for taking the time to stop by The Daly Planet.
Posted by Daly Planet Editor at 9:00 PM

Congratulations to them on the Emmy. I consider it well-deserved since most things produced by this group are very well done.

I miss Beyond the Wheel very much. That was a show I enjoyed, unlike some of the poor offerings shown on Speed as regular programming.

Congratulations again to all involved.

Congratulations to everyone at NMG for the honor but I can honestly say I have no recollection of that show at all :)

bevo, I was thinking about that, too because I'm sure that I would have watched. If it was aired right after the All-Star race telecast, then I know I didn't see it since I was at the race and we were trying to get out of the parking lot and headed home.

Maybe they could re-air it a few days BEFORE this year's all-star race and get fans revved up for the event.

I'm with Bevo and Gina I don't recall that show either. Anyway, glad they won an Emmy that's quite an honor. Lots of hard work by the folks behind the cameras that don't usually get recognized either.

The show was really under the radar. Never heard of it. Wonder how a good show was missed by so many people?

Congratulations to NMG for the Emmy. Hopefully they get one next year for Race in 60 which is also outstanding. Good job, & I agree with the posters here replay it before the All Star Race to get us readier (new word)
Congrats again NMG.

Congratulations to The NASCAR Media Group on their wonderful achievement. One can only hope that David Hill gets the hint that if he wants to be taken seriously in the world of sports entertainment, and stop being the laughing stock of the Northern hemisphere, maybe he can change his ways, and put out a stellar broadcast that can be spoken about in the same sentence with the word "Emmy".

Congrats NMG.. An Emmy is a big deal to a lot of people. Never heard of the video before though. Or any of the other shows/videos in the article. Not sure what to call them so shows/videos will have to do. Just telling it the way it is. But, congrats on an Emmy.

From lots of these comments, I think it might be time for SPEED and NMG to re-air "Inside the Headsets."

I miss Beyond the Wheel too :(.

They had so many good shows that I wish they'd bring back instead of rehased PMR shows.

It's amazing the editing process. The show is roughly 22 minutes yet they have HOURS of film to go through to edit. And add to that include footage for a Monday turnaround from Sunday action. And how to you pick the right parts and put it all together and make it make sense.

Loved that show, really nice to see all the stuff going on. Just wish they would go all out like the did with the 360 shows and reality based shows they had. Following the teams around week to week was amazing. I am sure NASCAR did not like the REAL in depth look at the sport. JD why have they not done much of the week to week shows like they use to??