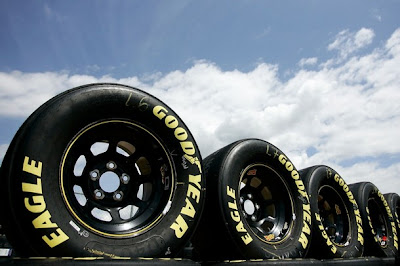 There is still a lot going on in the NASCAR TV and media world. Let's talk about some topics that will be in the news on Wednesday and over the next several weeks.

The Goodyear tire test Wednesday and Thursday at the newly repaved Daytona International Speedway will have no television or streaming coverage. While tire tests normally do not, it's pretty obvious that the elephant in the room is the repaved track with Sprint Cup Series cars at speed for the first time.

There was a rumor that NASCAR.com would provide some basic online streaming video with sound so fans could see the cars, but that is not going to happen. Both SPEED's Race Hub and ESPN2's NASCAR Now are on hiatus, so don't expect any updates on TV.

At 12PM ET on Thursday, DIS will offer streaming of a press conference to get drivers reaction to the new track. Available at daytonainternationalspeedway.com/tiretest, it will feature Robin Pemberton from NASCAR and Joie Chitwood from the infield media center at DIS along with several drivers.

Also, more good news is that fans are going to be welcomed during the testing for free. Just walk through the main lobby of the DIS ticket office and out the back door where the tour trams exit. That will lead to the Oldfield Grandstands. It's going to be chilly, so dress warm. The infield Fan Zone is not open for these two test days.

We should see some fan videos posted to YouTube during the day. If you follow us on Twitter at twitter.com/thedalyplanet we have several friends of TDP who will be at the test and will pass along what info they can get from scanners and conversation.

The ARCA Series will be testing at the speedway on Friday, December 17 and the same free admission procedures will be in place.

DIS also announced that the Daytona 500 flyover would be done by the Air Force Thunderbirds. That will certainly start the season off on a good note. Speaking of notes, we are still looking for the announcement of who will sing the national anthem for the big race.

Unofficially, Race Hub will return to SPEED on Monday, January 24, 2011. That is the Monday after Daytona testing. The show will continue to be one hour in length and 7PM ET should be the original air time. Hopefully, the execs at SPEED will stay true to the original promise and repeat the show at 7PM Pacific Time for West Coast fans.

It looks like NASCAR Now will return to ESPN on Monday, February 7, 2011. The first week of shows are all thirty minutes, with the one-hour Monday roundtable returning on February 14.

Updated: The folks at SPEED are passing along that they will offer wrap-up programs with highlights and interviews on the Daytona testing days in January. More details on this when the air times and on-air talent is assigned. This should include coverage of the big press conference with Brian France on January 21 from the DIS infield. That is rumored to be the official announcement of possible changes to rules in both the Sprint Cup and Nationwide Series.

We will have more information on Daytona TV schedules and any changes in on-air personnel whenever news breaks. Right now, there have been no changes announced by ESPN, SPEED, FOX or TNT for 2011. Steve Byrnes will handle both Race Hub for SPEED and continue his pit reporting duties for FOX during that network's Sprint Cup telecasts.

Any media tidbits coming out on Wednesday will be posted here. Check back with us throughout the day.

In the meantime, please use this post to comment on the tire test or any of the topics mentioned above. To add your opinion, just click on the comments button below. This is a family-friendly website, please keep that in mind when posting. Thanks for taking the time to stop by The Daly Planet.

Posted by Daly Planet Editor at 3:00 AM

At this point I am already desperate to watch anything that is available despite another disappointing year.

Did I miss an article on why there is not at least once a week Nascar Now or Race Hub? The only thing I remember is just a flat statement there would not be any. It would seem to me there would be a large audience and plenty of willing advertisers, so it would definitely make money. For me, it just does not make sense. MC

I'm home from work sick today (first time in a long time...ugh!), and TV coverage today would have been awesome!

Alas, it's just another no-brainer opportunity lost by NASCAR.

I don't understand why there isn't at least a weekly show for covering the motorsports news - either RaceHub or Speed Report during the off season - considering the tire test at Daytona.

Of course it's been a long season for all the NASCAR guys - maybe they just need a break.

Seems like a good opportunity to get the fans engaged before the whatever they call it "fan thingie" at Daytona. Or did they give that up too?

Trying to listen to press conference. Not having any luck. Is it me or them?

Di, it's on Thursday.

Cars back on track at DIS. Two car drafting allowed.

Darren I agree with you about this would have been a good opportunity for Nascar to have some information on these tire tests! Ho Hum!

2011 Resolution - record ARCA, USAR, UARA, K&N, and every other 'AA league' series that Speed carries so I've got something to watch this time next year. Like Anon 8:55, I too already have the DTs. 'Pinks' and 'Lucas' just ain't cutting it.

JD, everyone, Nascar appear to have signed a deal for the UK for Nascar rights to Premier Sports - a channel with virtually no subscribers. No "casual viewers" dropping by. No audience growth.
No HD - picture little better than the free-to-air SD efforts of Open Access in 2010.

Nascar have signed with a start-up network with reportedly poor customer services, that it appears to be almost impossible to unsubscribe from. This network is run by the same people who were involved with Setanta, whom many fans got financially burned by with up-front subscription that disappeared when Setanta went bust. Many UK fans (mostly football) vowed never to have anything to do with them again.

In addition, it appears they have only signed Cup rights, no Trucks or Nationwide, making it even less value for money for the subscriber.

We know Nascar Corporate Office were reading forums where they were begged not to sign with Premier (because they posted onto the forum), but they did anyway.

Unbelievable day for UK Nascar fans, and not in a good way. Keep up the pressure on the web stream JD, we might need it!

Isn't it amazing that Nascar virtually disappears from the media during the (very) brief off season, while football and baseball NEVER go away? I can't believe that the networks that broadcast the races don't keep some sort of presence for fans. A weekly show covering all sorts of racing shouldn't be that difficult to put on air once a week.

I know that I am just repeating myself, but I would like to see Speed Report go on during the off-season; maybe just a half hour, & include many types of motors sports. Other series world-wide are doing winter testing also. Marybeth

Between JD (both here and tweets) and Autoextremeist, there seems to be enough stuff to keep me occupied.

After reading a few comments from drivers on the tire testing, I'm betting that Goodyear will change the tire compound before they run the Daytona 500. It's working too well and lasting too long. That won't create the "Game 7 Moments" that BZF craves.