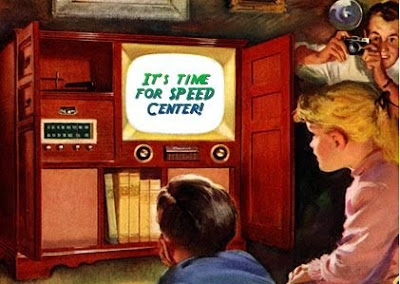 Posted by Daly Planet Editor at 12:05 AM

This is great news! Speed is moving in the right direction finally-if you want reality tv you need to make it reality centered around racing-like NBS 24/7 was or hot wired or anything else produced by NMG. The lifestyle shows are annoying. Barrett Jackson is probably the only non-racing show I watch on the network and thats only when its live-not the endless re-runs. Speed was built on live racing-a studio show presence will be great-it would be nice to have a show reminiscent of thursday thunder on espn back in the day-they are in charlotte-it wouldnt cost that much to drag 2 cameras and an announce crew to the Lowes motor speedway small oval or the dirt track for some live short track racing or to bowman gray stadium-youd have a guranteed watcher in me. Either way this is a great and positive step away from whatever the past crap was.

Speed’s credibility is so low that I will not watch Speed Center until it goes live and I read what other Planeteers have to say about it. Nascar Now is so much fluff, so much softball reporting, and so much toeing the nascar line its disgusting. And with all the lifestyle reporting thrown in, why should I believe Speed Center will be any different? For comparison purposes, I will watch Despain’s recap of the racing weekend. I may not agree with everything Despain says, but at least he states what he thinks. Again, sorry to be so negative and I hope Speed Center lives up to your article. MC

Thanks again for keeping us all updated on the TV changes in store for Nascar. I return to this blog everyday in order to stay in touch with the sport that I love.

Looking forward to tuning back into SPEED as the season gets going as well as SPEED.COM this week for streaming.

Sounds great. I hope there are other new shows (about racing) in the future.

That sounds like good news to me. I did try and catch TSR when it was on.

Maybe just maybe someone is catching a clue about what needs to be done to improve Speed's lineup.

Revamp RaceDay too - it doesn't need to be 2 hrs and it needs people on it who are in touch with things, not blithering idiots like KW.

Gee, we had TV,Phonograph & AM/FM/Short Wave Radio set that looked just like that. Was a DuMont. I can still remember the cool hmmmmm it made when warming up and how could pick up Radio Moscow.

As for the other news. Well, that's nice, but I really want more from Ms. Wheeler. Am I too greedy? I dunno. What I do know is that I rarely watched TSR so renaming it and making it updateable is to me a yawner. It is good, however, for those that like it.

As long as Jimmie Spencer is not involved in it I will check it out!!

AR - radio moscow? you could really get that?

I just read on SceneDaily that NASCAR is going to change the points system again to a one-point-per-position system.

My TV-related question is: How much do ratings have to drop before the front office wakes up? The sport is losing all credibility. If they do this, ratings will be down another 25-30% and attendance will drop further. It is so sad to watch the sport destroy itself for no good reason.

I'll believe it when I see it. After everything else Speed has done in the past, I tend to be a bit skeptical so I won't be disappointed.

Where's this leave "the old windbag" as Dave DeSpain describes himself?

As to Radio Moscow, I use to listen to them from time to time when I was stationed overseas. They had a better selection and more up-to-date music than did our own Armed Forces Radio and Television Service (AFRTS or as some of us called it "AFARTS").

Yes, short wave. Also got the BBC and I think I remember Radio Luxembourg. But listening to the Commies was much more fun since we thought, being kids, it was something forbidden. Like admitting you knew where your father stashed his Playboys.

I (like many) Really don't watch ANY repeat ANY of that other cr..stuff . Spence is fine & why can't any body get Schrader on there the guys hilarious. Completly agree with the Toe The Nascar Line (FLUFF) & I also have no intrest in being conned by the slanted reporting. Keep Dave Despain

Is it just me or does this sound vaguely familiar to a long-since-deceased program called Speed News?

Are they planning on covering World Rally? I read last week that ESPN Classic will be broadcasting WRC in the United Kingdom, nothing about the USA. Marybeth

WRC is on Discovery HD Theater in the US. Check your HD channel list. ESPN is distributing WRC in the UK only.

Today on Sirius Speedway, NASCAR spokesman Ramsey Poston confirmed that Brian France is still meeting with teams and has not finalized any changes to the points or the Chase.

Poston also said that if NASCAR changes the Sprint Cup Series points, they may well put the same point system into the NNS and truck series.

That's all we know right now.

Sounds promising, but not enough to get me to subscribe to a package that offers SPEED.

For me, the signal that management finally understands will be when LeMans 24 coverage isn't interrupted to show NASCAR truck qualifying.

Dave DeSpain has been the best thing on that channel for more than five years. I'll give props to their F1 race coverage as well, but they ignore that portion of the sport for the 165 other hours of the week.

Had no idea about this until somebody put it on twitter just now.

I hope this show is up to date and INFORMATIVE with no FLUFF.

How about some Robin Miller or Schrader? How about THOSE TWO as a team on a show, huh, Huh?

Frankly I won't be happy until they get rid of the loony TWO HOUR RDay & put it back to one hour and give WIND TUNNEL TWO HOURS ON TV. I will not invest 2 hrs of HOME DEPOT adds & stupid loud fans & insipid wavy signs giving me vertigo on tv.

I listen to WT extra but not a replacement. 2 hrs on tv THEN extra online.

WT is the shortest hour on tv w all the commercials.

Once again, SPEED REPORT WAS NOT BROKEN. I thought it was fine the way it was before.

sorry for yelling but I'm so fed up w SPEED, it's pitiful.

Give us some Colorful Commentary with Robin Miller & Ken Schrader Something for long time fans in stock & OW.

But heaven forbid SPEED give us something for the mature folks.