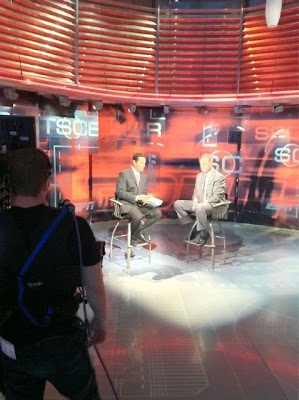 In typical ESPN style, it was a factual note without emotion or a shred of useful information. Just the facts:

France will be in the studio and join part of the one-hour Monday roundtable edition of the program to discuss the sport with ESPN NASCAR analyst Ricky Craven, ESPN.com senior writer Ed Hinton, NASCAR Now lead reporter Marty Smith and host Allen Bestwick.

In addition to appearing on NASCAR Now, France also will be interviewed on SportsCenter, ESPN’s flagship news and information program, during the 10 a.m. program. The interview will re-air in later editions of SportsCenter between noon and 3 p.m. Monday.

So, the NASCAR Chairman is heading to Bristol after a weekend when ESPN dumped the Nationwide Series race to show the second day of the NFL Draft. The entire NASCAR racing weekend belonged to FOX and SPEED.

Sunday, Bestwick was busy on Twitter gathering questions from fans that he could use in the discussion. Monday morning, ESPN and NASCAR were both promoting the France appearances on social media outlets.

We will update this post after SportsCenter and NASCAR Now and summarize France's remarks.

Update #1: France appeared on SportsCenter, reinforced that the sport was on a comeback and that fans were impacted by the tough economy. He confirmed Dale Earnhardt Jr. was the biggest franchise in the sport and his success was good for all. He restated that the changes to the Chase for the Championship were designed to reward racing for the win instead of just running for points.

Posted by Daly Planet Editor at 9:45 AM

IMO, France showing up and talking is a big "who cares"? Unlike EF Hutton, when Brian Z France speaks, nobody listens - or at least I don't.

Were the SC hosts polite? Considering how they usually consider NASCAR such a joke, I don't bother with them.

I expect Allen will do a better job tonight and at least he is preparing by getting input from the fans. Although I'll repeat myself by saying that unless France had showed up in ESPN's offices to raise cain about how terrible their coverage is, this is a non-event.

What they offer now is an inferior product, IMO.

NASCAR was too greedy for the bulk TV revenue up front, and unfortunately missed being able to thoughtfully control the future ~ squandering the internet potential.......

They chased away many of the "legacy" fans of the sport by completely missing what attracts & keeps a NASCAR fan. IT is NOT like other sports, and the fan base cannot be treated as so. I don;t say the fans are "special", but the model is completely different.

Mr France can go on TV and say all these things, and I don't have the specific numbers to definitively refute his statements. but it sure looks and FEELSlike a whitewash of the sport's situation.

It was a good interview simple, what do you expect??? Done well though, cant wait to hear what Brian has to say on Nascar Now I will be watching and interested in what Brian has to say! But yeah I see where your coming from JD all this after ESPN dumped the Nationwide series race for the NFL Draft! Unreal that t'd me off but hey we did get to see the race in better form on Speed so whatever

A really slow day in sports.
#1 Nascar Now is on at 5.
#2 Nascar thinks Brian France will
add something to the program.
What ever France says will make no sense unless you understand
marketing and greed.

Thanks for all your hard work JD
and God bless our Navy Seals.

We are happy with the racing, but very annoyed with the manner in which it is being presented. We are surprised that Nascar does not have , or at least appears not to have a say in the way Fox seems to be letting things go to the devil when you look at all the silliness with their bonehead analysts and some of their announcers. Unless this problem is addressed soon, they will see their fan base slowly erode.

Did he not see all the empty seats at Richmond?

People kill ESPN when they don't do enough NASCAR. So they bring have France on their biggest show and people kill them anyway. We're the only fans that whine this much about TV. When we end up complaining it away onto Versus or Velocity or their own network no cable carrier picks up, then we can all whine about why the sport's profile has dropped so much like all the other racing leagues.

Oh Great BZF wants attention. Well he is just going to tell a bunch of stuff we want to believe but do not. Last year was the last straw. He said the drivers are going to have more leeway but he fines Hamlin for saying something NASCAR does not like.

Brian France is a sociopath and a hipocrite.

TV ratings are in the tank but brian does not care one iota.

The COT is safe but not raceable. The Busch Series is basically FUBAR, destroyed, dead.

When Brian comes on, i suggest you barf, roll your eyes or mute.

I'm just now seeing parts of the race on NA$CAR Now. I can't believe all the empty seats, WOW! Yeah, he see's all those empty seats, he's just in total denial about it I guess.

Will there be a re-air of NASCAR Now tonight/tomorrow morning?

Anon that was at the end of the race if you actually watched all the race you would have seen it was near a sell out!!! I think its time we shorten some races.. I would never leave a race early but it happens

sociopath? where is your evidence for that? I don't like the guy and he clearly has issues, but really....

I listened to part of the interview with Brian France. It got off to a bad start when Marty Smith offended France by saying that Nascar was "dictatorial"! France's reaction was priceless. As expected,France punted on the Montoya/Newman kerfuffle by stating that Nascar was always a contact sport. Mr. France obviously missed Newman's point of blatant retaliation with a race car. I don't expect Nascar to do anything to Montoya just like they didn't in last year's Chase when Reutiman fenced Kyle Busch. On a roll, France said that Junior was the last Cup driver to emerge from NNS. My brain must be addled,but wasn't Martin Truex and Kesolowski a more recent NNS Champion??? I could go on, but why bother?

Did anybody watch? Was it the usual softball questions?

When Marty Smith asked him about his lack of presence in the garage area - he asked BZF if he even cares ? Boy did France stumble and stutter over that one !

Stick with the Biff said...

BS61, I don't know if I would call it 'softball'...but he gave the usual expected stock answers. He made the 'ratings and attendance are up at certain places' comment, and that was kinda lame (we know the early races were down/even from 2 years ago, not against the Olympics this year.) I did not like his answer about safer barriers, that there were places where it wasn't practical to put them. As Kenny Schrader has said, if there's a new place on the track to wreck, they will find it. We need more of them on the inside. At least he looked a little more professional than some times when we've seen him.

And Jonathan, someone yesterday mentioned they were there & spoke to a number of people who got cheap tickets from Groupon & Living Social. Now, I think that's good marketing if you have empty seats anyways, you're not losing anything, and you might gain fans. Actually I think it's pretty forward thinking. But that helped put butts in the seats, it shouldn't give anyone a false idea of popularity being totally back.

Monday's Nascar Now is the only episode that I try to record each week.

I enjoyed the whole show, including the Brian France segment.

In addition to my comments (anon 6:01 pm), yes, it was your usual dog and pony show. Legitimate questions brushed off. France was asked why all walls weren't Safer Barrier. France waffled on his answer. He was also asked about the Cot resulting in boring races. Another punt. If you didn't see the interview, you missed nothing in my humble opinion. Gordon's incident with that unprotected wall really ticked me off. There was a good length of that inside wall that was bare concrete. How this exists on a dinky 3/4 mile track in this day and age is inexcusable. By the way, they showed an areial close-up of Kurt Busch's car as it brought out the Caution---he never touched the wall much less shed debris. Too bad they didn't ask France about that.