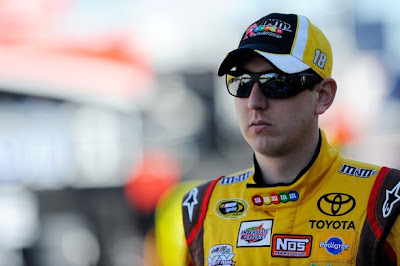 Im hoping it DOES come down to a free for all 5 lap wreck fest just to justify my time tonight!

Debris caution coming with 20 to go. Got to close it up for the finish.

Rambo, that was perfect!

Well I was on the phone did I miss anything. Not much as I can see. Bumper cams are working good.

At least the commercial load is a lot better now.

ESPN missing another entertaining race ...PRN on HotPass has been my salvation tonight ...#2's spotter calling better race than AB ...DJ, why do you talk so much and say nothing? ...DW influence carrying over

Radio has all kinds of battles in the back. Who freaking cares what position it's for until the final handful of laps?

dammit, all those laps led and Gordon isn't going to win this.

think nascar will look at making some changes to pit road speed calculations?

Truex is doing a heck of a job on two tires.

Keselowski won this race by speeding on pit road. Another race that could have been 50 laps.

Fair enuff, Mike. I just got into this two years ago - applied my apparently profound genius to it...and this sucks.

ESPN/ABC/The Power Of Jesus - are using the same cameras/settings that they did back in 1990 at the latest with worst shots.

I hope the beer helps. They should've sold whatever they're using at auction.

JD? Not seeing too many arguments here - am I right, wrong, or can you educate people?

This looks like a low-budget ARCA race using newbie camera-people. Not nearly as good.

Race is over. I don't care.

Good for Brad, and Michigan, not that he cares.

Good to hear The Captain chime in on HotPass

4 for 4 ESPN BLOWS THE BRISTOL WEEKEND

The most boring Bristol race I've ever witnessed. Congrats Brad

This race coverage on big time ABC and this is what they figure will make and keep Nascar fans.
Bad jobs guys.

Keselowski cheated into a win. Very undeserved. 2012: That pit road things needs to be fixed.

Gina: Enjoy trying to survive this.

Thanks to those of you who stayed. It was a long night.

Not too sure what to say about this one. Post race column will be up in a bit.

This is not my NASCAR and NFL is right around the corner. Ya know?

Bad Brad? Really after all that? Maybe its now official, Bristol aint what it used to be.

Pit road speed loophole in the rules. Chad and jimmy have been doing this for years.

really disappointed with that finish considering that Brad K got away with a fast one - literally!

Thanks, Adam, you take care, too.

JJ and Chad figured out the scoring loops a long time ago. everyone else is just now catching up. Chad said he used to pick pit stall by where the loops are.

If people base their decision on what they just witnessed on TV, Bristol will never have another sellout. The race looks boring with the TV coverage and people won't risk the cost of attending the race in person.

He didn't mention Rusty winning here and being a champion. Made me happy.

Somebody please give Brad a towel!

Be as condescending as you want about the 'old' Bristol, but this is why I no longer have season tickets. Just another race track.

Sally - my only Bristol night race was the first one after the reconfiguration and new car. I'd never go back. Too far and too expensive to sit through it live.

We have never been there but have watched every televised race at Bristol and really didn't know if the old was better than the new. But Bristol is a Bump and run track, at least it was.m Two lane racing is great but I'm voting for the old configuration.
Don't like wrecking but it was a more exciting race.
But then again maybe it was the old ESPN. Don't know.

I live about 50 miles from the track and there were several folks from my town that would never miss a race at the track. The "new" Bristol and the increase in ticket prices turned them off. I don't know anyone who goes to the Bristol track any more. I do know several who now go to the good half mile dirt track at Rural Retreat, Va. It's cheap and exciting with no mystery cautions.


AKA: Francis the Talking Mule

Love dirt track racing. Live in Chico California, home of the WoO Gold Cup Race.
Oh, wait, it's too expensive to go there any more and a regular night is more than $50 for two.

The race wrap-up post is ready for comments. Thanks again for your patience.