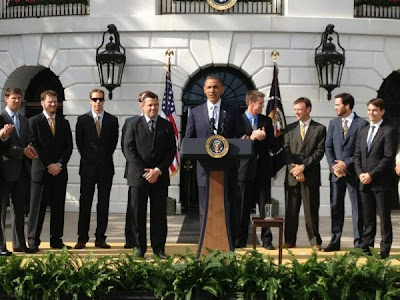 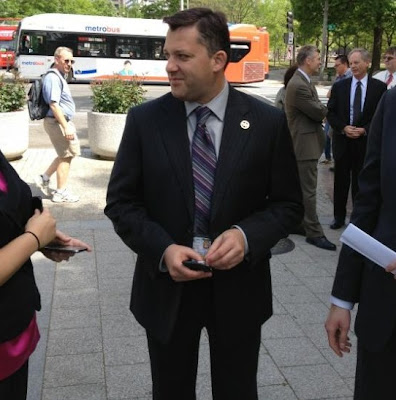 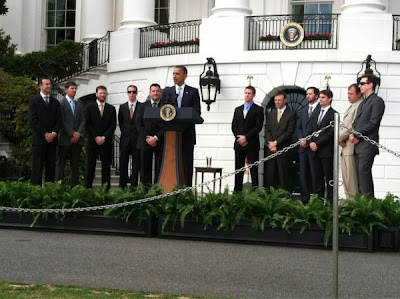 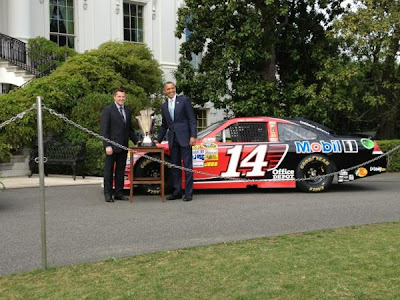 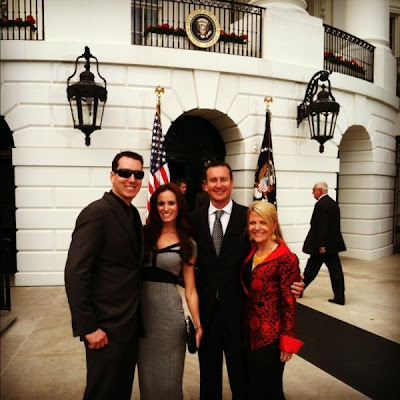 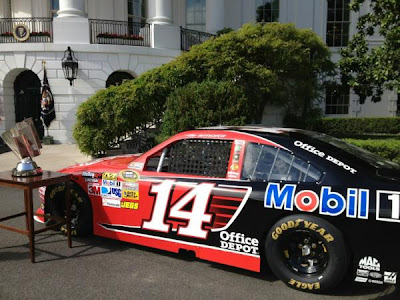 Tuesday was a big day as the entire 2011 Chase for the Championship field along with Sprint Cup Series champion Tony Stewart headed to the White House. As with the other championship sports teams from across the country, the NASCAR gang put on a good show during this meet and greet with President Obama.

After a tour of the White House, the Chase field assembled behind the President as he delivered prepared remarks. He joked that he was going to take some lessons in dealing with the media from Stewart. Obama acknowledged Jimmie Johnson's past championships and that Carl Edwards was a member of the President's Council on Physical Fitness.

He also spoke about NASCAR's efforts to support the military, including the annual visit to the Walter Reed Army Hospital in the DC area and the efforts to bring awareness to the Wounded Warrior Project.

The White House provided a live video stream that was very professionally done and showed the ceremony and then the President and Stewart chatting next to the #14 championship car. The drivers all looked great and many of them provided pictures and comments via social media. We thank NASCAR's David Higdon, Kurt Busch and Stewart-Haas Racing PR for the images.

It was a nice photo op and NASCAR did a good job to get all the competitors in the same place for this moment. Happy to have your opinions on this White House visit.
Posted by Daly Planet Editor at 10:41 PM

Top photo, aside from the Busch brothers, who else is missing from the photo of the top 12? I assume that's Kevin Harvick behind Tony Stewart.

Nevermind. Ryan Newman not in the first photo, Kevin Harvick not in the next photo of the 12.

Were it not for the inside baseball media outlets, including TDP, that serves us, the Hardcores, this event would have been the proverbial tree falling in a forest with no one around.

I'll give it to the President though. He was, in the context of a sport he does not follow, a fine host: gracious and complimentary.

They did a great job this year. Obama sounded like he knew somewhat about the sport of Nascar. Obama always invites Nascar to the White House and thats a good thing! I know he will never get to a race but he should just to see what its all about

IMHO, the lack of interest from the so-called NASCAR media partners is indicative of their opinion in the boardrooms. OK, a White House meet and greet is not a breaking news story, but out of respect for the NASCAR fan base, it should at least be mentioned. Once again, NASCAR seems like the barely tolerated step child. NASCAR needs its own network.

I'm sorry, but this year, I would file this under the "Who Cares" category, right above the awards banquet.