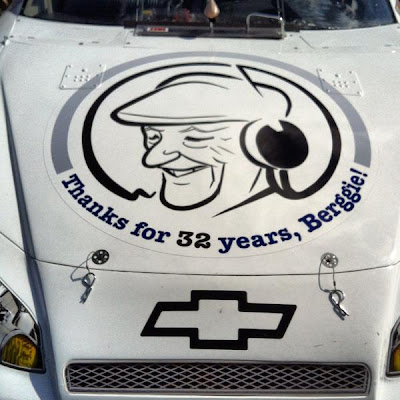 Dick Berggren is now 70 years old. Sunday will be his final race working for the NASCAR on FOX team.

There are many unique personalities in motorsports media, but Berggren tops the list. Driver, announcer, reporter and editor are just some of the things he has done in his life. By the way, he taught college psychology for almost a decade after getting his doctorate from Tufts University.

A New England native, Berggren has already been inducted into the National Sprint Car and New England Auto Racers Halls of Fame. After ending his driving career, Berggren moved to reporter and then editor of Stock Car Racing Magazine. In the print world, he may be best known for launching Speedway Illustrated over a decade ago.

I met Berggren working on the ESPN telecasts of NASCAR in the 1980's. Professional, personable and informed summed him up best. He has worked for many TV networks over the years, but FOX proved to be his longest run. He is ending a TV career that in total spanned 32 seasons.

"As a colleague and friend, Dick has had no equal in the 40-plus years I've been in this business," Mike Joy told the Detroit Free Press. "He always has been the best-researched reporter on the ground. Whatever the event, Dick by far is the best-prepared pit reporter this business has ever known, and he always has brought a great degree of professionalism to every telecast he has worked."

Berggren will be focusing his time on seeing more New England area racing, spending time with his wife Kathy and coordinating a New England motorsports museum that will be located at the New Hampshire Motor Speedway. That is not to say the transition away from TV will be easy.

"I'm dreading the 2013 Daytona 500 because I won't be there on pit road as part of that team," Berggren said. "That will be hard, but nothing is forever and I understand that. But, it's time to move on."

Best of luck to Berggren as the newest chapter of his diverse life unfolds. His contributions to NASCAR TV are tough to summarize. Needless to say, he had a passion and pursued it vigorously. It will be interesting to see where he pops-up throughout the remainder of this racing season.

We invite your comments on this topic. To add your opinion, just click on the comments button. Comments may be moderated prior to posting. Thank you for taking the time to stop by The Daly Planet.
Posted by Daly Planet Editor at 12:21 AM

He is so amazing and will be missed

One of the most knowledgable and professional announcers in the sport. A classy guy that will definitely be missed. Not the retirement I was hoping for.

Something about his demeanor, even when Dick was younger, always brought confidence that you'd be getting straight reporting, without any fluff, and with a focus on the story, not the reporter. I shudder at the thought of NASCAR
without him.

Truly a genuine person and reporter. No gotcha questions, no
false hype, no sponsor plugs. He is respected by everyone. Maybe some of the left overs should try
to be like him.

Best of Everything, Dr. Dirt!

He will be missed. But Darrell will just ruin it all day for him, because he wants the limelight. Watch how poorly he will be treated today, as The Talky Brothers will destroy any credibility and integrity of his last day.

What a true professional in the racing world. I remember one race, at Talladega, I was complaining to myself, about how bad my feet hurt from all the walking you do during a race weekend and looked up and Dr. Dick passed me at almost a run in the pits during the Nationwide race. I wondered how a man of his age could still be going so strong.

You could see the wheels turning in his head by just watching him. He will be missed!

It's been a pleasure to listen and watch Dick Breggren work these past 30something years.

Maybe he'll turn up in some capacity when NASCAR starts producing their own online content next year.

Good luck Mr. Berggren and thank you for all you have done for racing.

I agree with all the previous posts. With Dr. Dick, it was never about him. He didn't try to impress you or say any more than what was required to make his point. A very modest guy who was comfortable in his own skin.There's no one in the pits covering Nascar that comes even close. I wish him well with his plans for the future.

I'm adding my best wishes for him as he moves on - we here will miss his ability to ask a thought provoking question & then let the person answer it. And never does he ask the standard silly about feelings...
I'm really gonna miss his professionalism. Good Luck to him

Dick Berggren became back when I was teaching both a hero a savior for me.

It does not take much to know that by and large those in academe somewhat more than generally hold a dim view of NASCAR and its fans. It is the type of pinky-extended pseudo-intellectual faculty contempt reserved for an all too large number of things in this world about which the "scholars" are, to put it bluntly, ignorant.

As a blatant, notorious fan of the sport and the only one (as far as I knew) on my campus(es)[I taught at two Universities before tossing the life and the tenure away for good] I secured a copy of his dissertation ("The Function of REM Sleep for the Oculomotor System") and took it to a number of races until one day I caught up to him and had him sign it. It then occupied a privileged place in my office as proof for my oh-so-above-it-all colleagues that a Ph.D. and Professor were not an oxymoron when combined with NASCAR.

I still have the dissertation, and I shall miss Dr. Berggren

The ONLY reason I'm watching today is to see Dr. Dirt. I got my first copy of "Stock Car Racing Magazine" in 1974 and never missed an issue until it ended.
Just hope I can make it thru the Waltrips

FOX has done an excellent job honoring Dick Berggren. He has gotten an ovation with Mike Joy, plus with everyone wearing his trademarked flat cap (pardoning Chris, Michael and Darrell, I think.)

They have done an honorable job in my book to salute the man.

As NASCAR drifts inexorably toward personalities rather than journalists, I know that I will miss Mr Berggren. He has consistently been excellent over his entire broadcast career.

I watched probably the last 30 or so laps. I must say that it was a nice touch for the rest of the Fox folks to honor Dick Berrgren with the hats. I was even touched when JJ gave him a hug.

When I am back at that speedway I would like to meet him and shake his hand...good guy, class act.

Dick Berrgren has it head over heals in humility, class and genuine love of the sport without ego, I am saddened that alot of folks will think the ego of DW is how it should be done...the ones with intuitive brains will know better...God Bless! Class act.

I would laugh my backside off if Dr Dick showed up at ESPN or TNT. He should've been in the booth instead of the Motormouth brothers. He is always the professional. The Motormouth brothers? Little more than buffoons spouting their own agenda and constantly patting themselves on the back for some of the lousiet commentary I've heard since I started following the sport in 1963.

If you're truly retiring Dr Dick, enjoy it. It is well deserved.