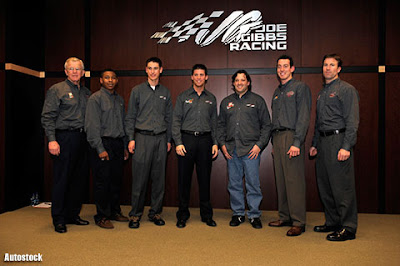 The Daly Planet welcomes comments from readers. Simply click on the COMMENTS button below and follow the easy instructions. The rules for posting are located on the right side of the main page. Thank you again for stopping by.
Posted by Daly Planet Editor at 5:00 PM

Smith is a fine reporter but there's a reason Bestwick, Burr & Manske were hired as hosts. Two very different skills.

i agree with cvt...Marty looked very uncomfortable as the host...it looked as if the empty suits decided to bench Nicole at the very last second.

I'm surprised you guys think Marty looked uncomfortable. To me he looked very relaxed, like he was having fun. And it was apparent to me that the interview subjects were also relaxed. The answers he got from everyone were great. I didn't think he was the least bit uncomfortable, and compared to what we normally see from those types of shows he was way better than the others.

Uncomfortable? You're crazy haus20. How many people will ask Joey Logano why the fans should believe he's ready? How many other people even KNOW that Denny Hamlin's family went through so much to get him to Cup? Come on Haus, you're way off base.

I thought Marty looked uncomfortable when he first appeared on the screen or Nicole threw to him or whatever it's called. I thought it was lag time or too many people yakking in Marty's ear.

HOWEVER, once the interviews were going he was fine. I missed parts of the show like the logano interview and Kyle b...I missed what was wrong with Nicole but Marty commented she sounded fine...a cold or something I guess.


I enjoyed the show the parts I saw...especially the interview with Tony and with ZIppy...man, I am going to miss those two working together...they even favor each other with their coloring to be real brothers. :)

Never said he looked uncomfortable, but he looked like someone new to hosting a show.Being a presenter requires a certain polish, it was missing, but I doubt Smith has experience at this role.

It's rare for me to disagree with JD,but we must have been watching different shows last night. I think both Smith and Manske are way over rated. I don't know what Manske's problem was last night, but she was just terrible,just going through the motions. If you listen to all the Nascar stuff on TV and read the internet, there was very little covered last night that hasn't been covered before. There were a number of interviews last year on TV with Hamlin's parents discussing the sacrifices they made. The program teases featured Kyle Busch. What we got was a short, interview of Kyle and Steve at the end that reminded me of a couple of guys awaiting root canals. Perhaps I misunderstood the teases when they implied we'd see the inner workings of JGR. I was hoping to see how they built the cars, used 7-Posts,an in-depth tour of the facilities,etc. What I saw were replays of old material.Granted, Joe Gibbs had a health issue and I was really interested in hearing what he had to say. Most Nascar TV reporters, through their positions have access to the drivers, owners and Nascar officials just by picking up the phone. Asking a couple of straightforward questions many of us have shouldn't be confused with excellent reporting.

What's great about this site is the ability to disagree. Smith is great. Just great. No one gets Tony Stewart to say what Smith gets him to say. I'm a huge Tony fan and I remember last year Smith did an article on him on the internet where he said some stuff I never imagined he'd say. And then yesterday he was very open again. Smith has a great ability to make people feel comfortable, and it shows. I met Smith once at Chicagoland and he was the nicest guy, so maybe I'm biased. But he is the same person on TV as he is in person. I just think he has a realness about him that is cool.

I agree with Sophia that Marty seemed a little “off” when he first appeared on camera. I was surprised because that is unlike him. When I realized that his main guest was absent, that explained it. I think he regrouped and handled the remainder of the program just fine.

I enjoyed this program. I wasn’t expecting “breaking news”, just a visit to the race shop.

What a difference between the Petty and Gibbs visits.

I just noticed, that in the column photo, Stewart, ever the maverick, is the only one wearing jeans. :)

I agree with most posts today. I would really like to see how the cars are put togeather. Maybe they could go to Stewart-Haas Racing and follow one of Tony's new cars from start to finish. This would include how they paint and letter the cars. ESPN has a chance to do what no other tv report has done. If ESPN doesn't maybe the SPEED channel can.

The best show they have ever had in my opinion was the week before last (monday) when they had the pit road reporters (Shannon, Jamie, and whoever the other two guys are...Dave and Mike)

Best insight by far. They should use that format more often.

He needs a hair-do, that duck tail looks silly.

lisa hogan said...
"For you Sophia:

I just noticed, that in the column photo, Stewart, ever the maverick, is the only one wearing jeans. :)"

agreed -- and with his shirt untucked as well! that photo makes me laugh right out loud everytime i see it b/c i can't decide if tony didn't GET the memo or if he forgot about it or if he chose to ignore it! vintage tony stewart, right there in the proverbial nutshell!

maybe he should have gone for the earnhardt jr/rick hendrick process: one appearance "not to code" has to be offset by the next appearance being right in line. and the two of them are actually keeping track b/c dale's "on probation"!

ahhh, boys will, after all, be boys!

On, Marty seeming off a little in the beginning, my guess was it could've been the lag time from the studio to the field.

I agree that if it was possible Nicole should've gotten the day off. She sounded like she had a case of bronchitis or was coming down with a cold.

He wasn't uncomfortable, it was just his quirky style that people are mis-reading. Marty's style fits well for many situations, but I don't think it worked in the setting at Gibb's.

I did get the impression that Marty was not as relaxed as usual at the beginning, which I thought might have been due to his reading the intro off a teleprompter, and not being used to doing so.

Now that I've seen most of the show (something must of ran over and just DVR the next show didn't get me the end), I thought Marty did a great job and Nicole should have been given the day off. Some of the "stiffness" was the lag time between him and Bristol some might have been the tie, suit, and dress shoes :)
I wasn't looking for any surprises either and I was really glad to see they included Marc Davis. I guess my only question is why now but since Kyle and JGR is winning everything in sight..why not.

I was happy to see Marc on there. He seems like a nice kid and most folks don't know who he was. It was about the one I wish was longer :)