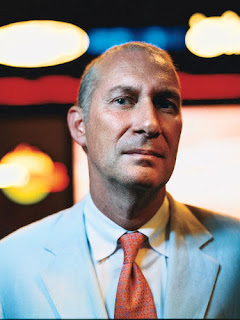 It was August of 2008 when ESPN Executive Vice President John Skipper, pictured above, told the media of the new deal between the network and the Southeastern Conference (SEC). It was an eye-opener.

ESPN had dipped into the seemingly endless pile of money available to the company and agreed to pay the SEC $150 million a year for 15 years. In return for the $2.25 billion, ESPN will carry a slew of SEC athletics on the various ESPN networks.

In early December, ESPN released details of the new West Coast Studio and production facilities the company was building in downtown Los Angeles. The five-story building in the L.A. Live entertainment complex was estimated to cost ESPN around $100 million when it was all done in early 2009.

Now, it is January and ESPN is just days away from beginning ten months of NASCAR coverage. The popular NASCAR Now program begins on Monday, while the Nationwide Series coverage starts at Daytona and will run all season long.

In July, ESPN picks-up the Sprint Cup coverage and airs all the races through the end of the year. ABC handles the "Chase for the Championship," which is the key to the NASCAR season. ESPN is NASCAR's biggest TV partner.

ESPN and ABC Sports President George Bodenheimer just released some new information about what the network will be doing in February, but it was not about NASCAR. It was not about the SEC or the new West Coast studios. As a matter of fact, it was not really about sports at all.

In a live computer videocast to employees, Bodenheimer announced that he was cancelling all executive bonuses, instituting an immediate hiring freeze and eliminating approximately 200 jobs. The world had finally arrived at ESPN's door.

"The economy is worsening," Bodenheimer said, "and ESPN and our business partners -- especially some of our major advertisers -- are feeling the impact more acutely than at any point in our lifetime."

Bodenheimer would not rule out additional layoffs and said the company is now reviewing operations to figure out ways to save money. ESPN's parent company is the Disney Corporation. One year ago, that stock was about ten points higher than it is right now.

NASCAR fans have been reading about the loss of major sponsorships for the various race teams as companies pull back due to the financial crunch. ESPN is supported by two significant streams of revenue in the US. One is the fees that cable companies pay to carry ESPN on their systems. These costs are passed along completely to the cable TV customers.

The second is the advertising that the prime sports products on ESPN bring in from companies around the world. ESPN is a unique advertising destination and it was this revenue stream that Bodenheimer addressed directly in his remarks about the economy.

Just last month, ESPN made the announcement that once again the network would travel the Infield Pit Studio, the Tech Center and all four on-air talent who work in those locations to the NASCAR races all season long.

The ESPN Sprint Cup Series coverage does not start until late July with the Brickyard 400. Speculation was that perhaps ESPN would drop the Infield Studio and the Tech Center for the Nationwide races until the July Cup coverage began.

None of that came to pass and at this moment ESPN is heading into the 2009 NASCAR season with all the bells and whistles intact. That is, until the Wednesday announcement by Bodenheimer that the company is actively reviewing ways to save money.

It will be worth watching to see how ESPN approaches another attempt at cost-savings in one of the most financially intensive sports carried by the network. That sport is NASCAR.

Ten months of race coverage across the nation of two different series is a monster from both a logistical and engineering standpoint. Add to that a daily show that travels reporters, analysts and guests to Connecticut on a regular basis for forty weeks and the NASCAR slice of the ESPN financial pie is a big one.

This is turning-out to be a NASCAR season like no other in my lifetime and we still have yet to turn one wheel at Daytona. While we wait to see exactly which teams and drivers show-up to race, it may turn-out that watching exactly who shows-up to broadcast those races may be just as interesting.

The Daly Planet welcomes comments from readers. Just click on the COMMENTS button below and follow the easy instructions. The rules for posting are located on the right side of the main page. Thanks for taking the time to stop by.
Posted by Daly Planet Editor at 9:00 PM

As far as I could read, the ESPN announcement has nothing to do with NASCAR.

Here is a line from the AP story which you can easily find online.

"Bodenheimer said he's ordering a review of operations over the next few months to find ways to save money."

As you may remember, during the off-season ESPN and Fox Sports got together to talk about ways to trim NASCAR production costs for 2009. You can also find that story online.

The results were surprisingly no cuts, but rather an announcement that the Infield Studio, Tech Center and crews would be on the road again all season long.

This certainly puts a different spin on things.

EESPN has a really irritating radio commercial by Scott Van Pelt in which he asks something like "are we the only ones left with money?" I wonder if it will continue.

In most cases it is easier to find savings in big cost centers than in small ones.

I think a lot of things will be changing in very short order.

Just trying to get fans ready if and when they do.

My comment about the announcement not having to do with NASCAR was a response to the title "ESPN's Surprising Move Just Days Before Daytone."

While there is talk about the impact of the economy on everything, so far, no changes that I could see that are called "moves" from either Fox or ESPN. They may make moves, but this article does not reveal them.

Maybe this will force ESPN to make a last minute change in their "mobile" plans. They really don't need all of the extras at the Nationwide races. I can understand them going all out for the Chase, but that's it.

ESPN is starting NASCAR coverage on Monday with the "NASCAR Now" program series. The following week, ESPN2 is scheduled for five straight days of one hour shows originating in Daytona and then the grind of the Nationwide Series begins.

ESPN has allocated $2.25 billion for the SEC, $100 million for LA Live and now is cutting 200 jobs to save what....maybe a million dollars tops?

We have not heard the last of the brand new public issue of financial issues with The Worldwide Leader and NASCAR coverage is no doubt going to be in involved.

JD,
Your math is a bit fuzzy for the cost savings of 200 jobs. That is significantly more than just $1M. That would only put each job at $5K. Typical corporate health benefits themselves cost over $5k.

I'd guess the true savings would be well north of $10M.

I think the announcers could sit back in the studio in Bristol, CT to call the races (like SPEED's F1 telecasts).
One camera perched at the top of the grandstand should be enough to cover the action on the track...

wouldn't work at a road course, spintrips....even Indy & Pocono would be a challenge.

Don't think they're quite that desperate....at least I hope not. I think some of this speculation is kinda premature until we have some idea what (if anything) they're going to do differently. I guess seeing what Fox does might hold some clues. Kinda interesting to watch it all unfold. A different world. I think I'm looking more forward to seeing California than Daytona just out of sheer curiousity...maybe they can stick some cardboard cutout people in the stands....

TDP wrote:
We have not heard the last of the brand new public issue of financial issues with The Worldwide Leader and NASCAR coverage is no doubt going to be in involved.
-------------------

My point still stands. There is no "surprising move just before Daytona."


what is the surprising move we should have read in your blog?

I agree that ESPN could move to be more like how Speed covers F1. Camera crew and minimum pit reports on site, people calling the race and analysts at the main studio. No infield studio, no tech studio, much smaller pre race show, etc. I don't need 6 or 7 guys calling a race.

I admire your perseverance, if you would like to edit headlines with me just drop me an email.

Already do full disclosure and have for the past two years. If I met him or worked with/for him, you would have known it. Nice try...again.

Think you will every be able to organize yourself enough to comment on the topic?

Actually, I think the broadcast for both Fox and ESPN would be better if they lost some of extra baggage that they carry. Most of those extras are basically fluff that takes away the number of green flag laps that I get to see.

The ultimate way to cut the costs of NASCAR broadcast - just show me as many green flag laps as you possibly can and use an MRN feed for audio. That would help cut costs and make the races better.

Didn't most of the Tech Center spots have their own sponsor associated with them?

People would get irritated when they would go full screen to the tech center during a long green flag run, though there were bills that had to be paid.

Though, then again, looking back at Cars 'N Jaws (a great resource!), the ABC tech center sponsorhip was "NASCAR on ESPN". There may have been money changing hands in internal company accounting with one department paying another, though it really was essentially unsponsored.

anon 1:33, that's a very good point. If a sponsor wants to pay for it, it's not going away. But I'm guessing that's going to be harder to get as well.

But I agree with many--we could do with fewer bells & whistles. In fact, less of that and more *good* pit reporters would be better in general.

JD- Apparently the fact that the economy has in fact filtered down to the Whirrled Wild Leper in Sports has not been conveyed to EESPN Radio as Scott Van Pelt's obnoxious commercial - everyone else is broke - is still running as of 5 minutes ago.

My understanding is that F1 has its own, huge TV crew involved doing the worldwide broadcast of F1 races. SPEED's F1 crew is absolutely topflite and I really would like to see them on Trackside one night. If I'm not mistaken that famous Southerner David Hobbs used to do color on some Daytona races.

I wish FOX & ESPN would do away with the guys in an infield studio telling me about the race that I would be seeing if they were not on camera at the time.

Why don't you just get it over with and change the name of this blog to "Daly ESPN Bashing".

So, all these other folks who have come here for the last two years to talk about NASCAR and TV are what?

You write these comments because you cannot participate in a discussion and voice your views.

I challenge you once again to man-up and speak your mind. We are waiting.