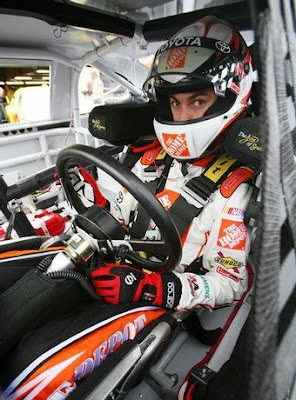 It certainly has been an interesting couple of weeks for rookie Sprint Cup Series driver Joey Logano. Click here for the call by Mike Joy and Phil Parsons of the final laps of the Toyota All-Star Shootout last weekend on SPEED.

The transition from youngster to adult is in full swing for Logano and it will play-out this season in front of the national media. Logano is about to step into the Sprint Cup "blender" where suddenly everything is scheduled and every minute away from the track involves sponsors, the media and the fans.

Thursday evening at 7PM, Logano will be the guest of Steve Byrnes and Larry McReynolds on Preseason Thunder from the new SPEED HD studios in north Charlotte.

In the past, Logano has done very well on TV with his quick smile and good sense of humor. In a way, Thursday marks his first official TV appearance as a Cup rookie and the new pilot of the Home Depot car for Joe Gibbs Racing. Luckily, he is with two TV veterans in Byrnes and McReynolds.

Logano is about to be introduced to a wide variety of TV appearances and interviews with a brand new agenda to discuss. This time, he will be directly in the line of fire where on-track performance and off-track lifestyle are concerned.

His TV exposure in 2008 was a mixed bag of polite interviews and several feature reports about his rise to the top at such a young age. Things really heated up when Tony Stewart asked for and was granted his release from JGR late in the season. Logano was suddenly out in the media spotlight fulltime.

It was last summer on the ESPN program E:60 that reporter Tom Farrey put together a feature that showed several different sides of the Logano puzzle. It was clear he is a talented driver with good family ties. Farrey reported that the Logano family had invested over one million dollars in bringing their son along in the racing world.

Still, his parents appear to be very nice and this young man may be just the breath of fresh air that the fans and the media need during this tough time. Byrnes and McReynolds will get to set the table for the season with their interview on SPEED Thursday evening.

Friday on Preseason Thunder the program will offer a report on the impact of Toyota on NASCAR and Byrnes will host the final episode of this program for 2009. All NASCAR TV comes to a grinding halt for Super Bowl Weekend and then both SPEED and ESPN2 start a long ten months of coverage next week as NASCAR ramps-up for Daytona.

The Daly Planet welcomes comments from readers. Just click on the COMMENTS button below and follow the easy instructions. The rules for posting are located on the right side of the main page. Thank you for taking the time to stop by.
Posted by Daly Planet Editor at 5:00 AM

I gave up Preseason Thunder after week 1 and just DVRed the show these past few weeks to avoid the fluff. The interviews offer nothing relevent to Daytona other than 'how was your vacation?' and 'what do you think of no testing?'

The rest of the show is a minute of real news and 20 minutes of fluff I can fast foward through.

Here's some ideas. Talk to Allmendinger about his new ride. Talk to the series directors of the Nationwide and Truck series about the status of 2009. Tell us who exactly is in the Budwiser Shootout next weekend with all the complex rules. Talk to Speed Channel's own Phil Parsons about his new full time Cup operation.

That's awesome! I will be tuning in to watch this for sure! I hope logano does well on tv, because he needs more fans :)

The only way this kid gets in the top ten is pit strategy on a rain-out day.

Marketing question of the day?? After the Superbowl,whats next?Why does Nascar in all there wisdom not promote there sport during the Superbowl!NBC,CBS,TNT,ESPN..Come on, lets pick up the greed factor boys..Why?? Because your going to need It!!! And Joey is not your anwser..After 30 some odd years I may never watch a Nascar race again!! Go back to the 80's guys and get rid of these slot cars!! and slot people made just for you!!

This sounds like damage control to me. Last year he couldn't even tie his own shoe laces without tripping, and the media hated it. He was supposed to have found the cure for cancer, and he fell way short of that.Then he puts his head in his you-know-what Saturday night, and made it worse by not apologizing. So JGR probably pushed,begged, pleaded, heck, even PAID SPEED to have him on, so he can save face for himself and the team, and spin Saturday's mess into a positive.
I agree with other posters that there are more stories of more importance to talk about.
Even if I as a fan would like to see young up and comers get some face time, given the fact that his parents are/were already rich, how much face time do you need if you're already a millionaire?

It's OK with me if the Speed Report folks want to take this Sunday evening off to catch the new batch of commercials on another network. :)
Marybeth

I found Bootie Barker's comment last week about Logano to be quite interesting. He said it won't take long for "sliced bread" to be sourdough unless he produces. Seeing how poorly he did in Cup races last season, and what he did in the All Star race last weekend, it could be a long season for what many feel is the next coming of the Messiah. Not every person in Nascar has taken a sip from the Logano Kool Aid, so this could be an interesting turn for the young man.

Joey was driving a substandard car for some (not all) of those races. Personally I think Bootie was right, had hasn't been 'tested' by having to drive a lot of those, and he will likely struggle with the 'making them better' part. But the truth is, he's walking into (once again) the perfect situation, an experienced team & crew chief, and a big time sponsor. There are probably a half dozen (at least) guys you could have put in there who would just just as well or better than Joey will...but if he succeeds, he'll be sliced bread again, despite being handed all the tools on a silver platter. I know there's a goofy mixed metaphor in there somewhere, lol. But he'll get too much credit if he does succeed, IMHO. Can't argue that he comes across as a very nice young man, though. And they did ask him about Irwindale, although he just answered with a big goofy grin.

glenc, I found Logano's answer about the Irwindale race to be silly and rather egotistical. Just because it's a non points race doesn't mean you can drive like an idiot and all's forgiven. Just let him try this at the non-points Shootout, and let him take out a few Cup drivers and then let him talk smack about how it's no big deal because it's a non-points race. For that matter, what if he makes the All Star Race in May and he pulls the same numbskull move? What would his fellow drivers say then? Would they cut him slack because it's a non-points race? I don't think he'd be singing the same tune then. I think the ego is already catching up with sliced bread.

I caught a few minutes of Joey and his answer about IRwindale and could not believe his ego either...just laughed it off like it's funny.

OBVIOUSLY he doesn't have to worry about cost to fix wrecked cars. If this kid keeps this up, he will indeed become SOUR DOUGH...so far, when put in the real world of CUP RACING, he has fallen out of the sliced bread nik imo.

I do agree on that point with both of you--my first thought was that the other drivers don't have Joey's financing. Joey did *say* he was sorry about that, but it didn't seem particularly sincere. I try and remember he's a kid, though...a kid who probably hasn't paid as many 'dues' as some others. Surely he saw it with his competitors, but maybe he was somewhat sheltered from it. I do think he could learn from some adversity. I thought it was a good sign that NASCAR penalized him though--he's not Teflon.

hey JD are you sure friday's preseason thunder show is on toyota? because im watching it now and theyre talking about dodge, not toyota.

I get a heads-up from SPEED in advance. Sometimes, things change. Thanks for the tip.

@anon 1.29 8:13--Kylie before his first season missed races because he crashed in quals or crashed in the race. And everyone thought he was going to fall flat. Then his first year he won a handful of races and look at him now :). Not saying that JoLo will have the same success but you never know how things go once their in "their" equipment and with "their" team.