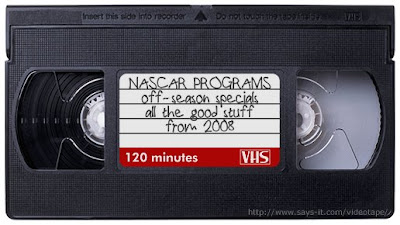 The Daly Planet welcomes comments from readers. Just click on the COMMENTS button below and follow the easy instructions. The rules for posting are located on the right side of the main page. Thank you for taking the time to stop by.
Posted by Daly Planet Editor at 7:00 AM

I have this set up on the DVR. I'm not sure if I really want to watch it though.

Do I really want to see the references of KyB winning all those races again? Or, JJ starting on the pole every other week due to rainouts? I'll probably tune in just to see if it's worth DVRing again.

Personally I would have thought that Speed would have put this show in prime time to capture the maximum amount of viewers and I guess that we the fans really know more than they do, we just don't get paid for it unfortunately.

Dont need It! Lets see the new stuff..Elliot,AJ...Come on man!!Lets here how there going to shorten pre-race ceremony!For god sakes If this does not stop!!.Whats next?Whos left to sing the national anthem Iggy Pop!Ive have a new years Idea!.Lets bring nascar back to somewhere between the early eighties and mid nineties..Oh buy the way!! Mark Martin 2009 Champ!!Bet on It...

I have decided I'm not so desperate for racing that I'm willing to tape a 3 hour rehash of a year that wasn't very exditing to begin with. Too bad the couldn't have put this on at a more convenient time.

Could you re-phrase your comment and then re-post please?

The rules for posting are located on the right side of the main page.

Wth the crazy time slot is anybody (NMG or SPEED) making any money on these shows ?

I'm glad SPPED is not putting this in prime time. A race fan can't get enough Pinks or Barrett-Jackson you know.

DVR'd but probably won't watch. Don't really care about last season rehash. I'm sure we will here and see it all during 09 broadcasts. There is so much going on now with the teams, why don't they try something to tell us about the current situtation.

I'm glad you kept us updated JD...my cable guide didn't have it noted until next week.

I had to do a manual set for today and tomorrow. Guess it's good to review the highlights (or lowlights depending on your perspective/how your driver did/etc.). That's why I miss the real review shows they use to do. Bring up moments you might have missed/forgotten about and want to see again.

But of course now with Youtube, Google Video and similar sites you can pull up 24/7/365 just about anything that would make a highlight reel.

So far this is a good show. Nascar really can make some cool shows. They really need to have this on in primetime instead of this time slot. Thanks for the heads up JD!

By the way JD, does it cost a network more money to show highlights of NFL games in HD compared to standard def or is it a question of just getting the highlights as fast as possible? Thanks again for the great website!

Is it true that SPEED wants to keep primetime free for a big-time special = Pinks at Barrett-Jackson?

Thanks a lot and say hi to everyone down there for me.

There is a new story up about the first episode of 39/10.

Please refresh your browser or click on the TDP logo at the top of the page.