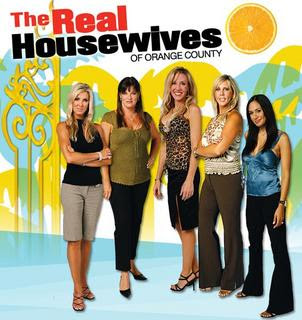 When the TLC network announced a new series called NASCAR Wives, eyebrows went up all around the town. Coming to mind right away was the group pictured above.

Bravo Network has The Real Housewives of Orange County as a reality TV hit and that program is now going into its third season.

As the cast of this NASCAR project that TLC is calling a docusoap was announced, it was certain that if nothing else the show was going to make for some good gossip around the garage area.

Now, with Speedweeks approaching, there are actually several juicy storylines unfolding that may make NASCAR Wives a show that gets an audience, even on a mainstream TV network like TLC.

In fact, the producers at The NASCAR Media Group and TLC decided to delay the premier of this series until the Daytona experience could be edited into the show.

That made a lot of sense because just this week it was confirmed that every member of the NASCAR Wives cast is now going to be heading for Daytona.

Everyone knows Kelley Earnhardt and DeLana Harvick. Earnhardt plays a key role in managing the business affairs of her brother Dale and was front-and-center during his transition from DEI to Hendrick Motorsports. Harvick has been active as an owner for several seasons and brings a strong racing heritage to the TV series.

While DeLana and Kevin remain a happily married couple, Earnhardt has just gone through a divorce from a well-known NASCAR personality and is now dating someone else who is involved in racing. This contrast and the real life moments that come with both situations should make for some interesting TV.

The Scott Speed story appears to be coming directly from central casting, with a Euro-influenced highly-regarded driver making his way into the Sprint Cup Series for the first time.

Speed will be joined on the Cup circuit by fiance Amanda Mathis, who is yet another NASCAR Wives cast member. Mathis also has racing in her family, along with a NASCAR public relations background.

Recently, veteran driver Jeremy Mayfield announced that he was headed for Daytona with his own Sprint Cup team and has every intention of campaigning for the full season. That allows another cast member, Jeremy's wife Shana, to be in the racing mix for this season. Shana and Jeremy are no strangers to NASCAR reality TV as SPEED viewers can attest.

That left only one cast member out of the Daytona mix. Angie Skinner is the wife of Camping World Truck Series veteran Mike Skinner. This season, Mike was out of a ride and only a last-minute deal would get him on the track in Daytona.

Enter perhaps the most unique owner in NASCAR, NFL star Randy Moss. His single-truck operation was set to campaign in 2009 with young Tayler Malsam running for rookie of the year. As Dave Moody reported on The Motorsports Soapbox, Moss decided to expand that operation to two trucks just a short while ago, but he needed a driver.

The phone call went out to Mike Skinner who took the job. That puts Angie back on the racing circuit for the season and also brings her over to the Daytona International Speedway. The Skinners are full-time Daytona residents and well known in the community. That will be another wrinkle as the TV series unfolds. Not everyone lives in Mooresville or Concord, NC.

At the present time, TLC is suggesting that this TV series will begin in early March and continue through the season. We are still waiting on the actual number of episodes, but are told each one will be an hour in length. The episode with the Daytona footage will kick things off.

This series will be a new experience for TV viewers as NASCAR moves away from the sports TV networks and migrates over to the land of What Not To Wear.

Perhaps, Stacy London and Clinton Kelly will put on some NASCAR t-shirts and head for Daytona to get in touch with the new members of the TLC family. Now, those two walking through the garage area would be something to see.

The Daly Planet welcomes comments from readers. Just click on the COMMENTS button below and follow the easy instructions. The rules for posting are located on the right side of the main page. Thank you for taking the time to stop by.
Posted by Daly Planet Editor at 9:00 AM

Stacy and Clinton on Pit Road Too funny, I can just see it now they take one of the pit lizards and make them over but somehow I don't think they'll find the right outfit in those New York stores. This show should be interesting but I really don't think the title fits how about The women of Nascar since only half of them are wives.

I can't believe you even know who Stacy & Clinton are, JD, lol.

I agree with Nrf--the title is bad. But I guess they're trying to keep it like the other 'wives' shows (which are probably ripped from the 'Desperate' original.) Who knows, could be interesting; depends on what they find. Most of these reality type shows are dependent upon the personalities involved. A show about 'Little People' might have been totally boring; they just found *interesting* little people who do unusual things (they have a number of business ventures). So I'm not willing to slam 'Wives' until we've seen it. Never thought I'd see Jeremy Mayfield as a 'field filler'...I wish him luck.

This series took quite a twist. Originally, Shana Mayfield and Angie Skinner's spouses were not going to be racing at all this season.

Now, all of the cast members will be on the racing circuit for the season. I hope delaying the first episode is worth it.

It should be interesting to see if mainstream TLC viewers take to it as they have the other off-beat reality shows on that network.

Please speak to the topic being discussed or email me directly. Thanks.

Without the being at the track, I bet it was boring. They probably found out that they do laundry, grocery shop, clean the house - doesn't make great TV. Don't need to see that on tv, you can go to anyone's house to see that. Now seeing what goes on during a race weekend, that's a different story. Watching Shanna be disappointed about Jeremy not making the race will be a good story line for them.

This means that some things might be staged for the camera and that is rather different than the random away-from-the-track footage we are used to seeing in other NASCAR reality shows.

That is the reason I put the Real Houswives of OC picture up. Lots and lots and lots of that series is staged. Did I mention lots?

I like how you keep referring to the woman as "cast members". Hahaha

Honestly, I did not make that up. That is the way they are being referred to in the entertainment media. Interesting, huh?

I'm glad that Skinner and Mayfield now have rides. Angie and Shana would've been the Boris Saids' of the show.

How awkward was it for Angie and Shana being on this show with Delana with their husbands unemployed? KHI has both Truck and NW teams.

I'll be tuning in as I want to see how much inside we get to see.

Can't imagine I would waste my time watching it; not into "housewive" type of programs, Now, maybe the Wnat not to Wear pair ought to be a part of the show, from what I have seen of the people who will be on the show, they are not fashion plates, but more like ordinary people.

Uh, does anyone really think the drivers wives actually DO their own laundry? :-) Or Delana cleans that 8 bedroom mansion they live in?

Interesting that Kelly is still considered a wife for the shows purposes...

Okay, now I HAVE to see the What Not to Wear crew do a Nascar makeover. Just the idea makes me laugh out loud. Good luck prying that driver T-shirt off.

Thanks for the image, JD.