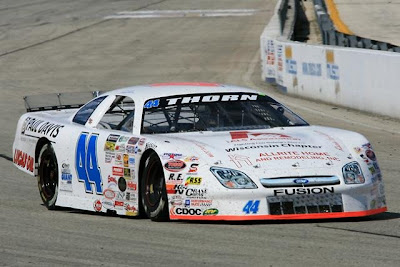 Thanks for taking the time to read The Daly Planet.
Posted by Daly Planet Editor at 4:30 AM

Definitely a step back from last year. It doesn't look like HDNet stayed on at all this year, and they carried several live races from these series, and had pretty good coverage of it. I'll take this over nothing though.

3pm? Why doesn't SPEED change it's name since CLEARLY the racing stuff is a serious after thought to them now.

Why not call it FAKE REALITY SHOWS AD Nauseum in prime time.

I am so disappointed that they keep burying the racing stuff for what you so GENEROUSLY call "lifestyle shows".

HDNet dumped out of its contract, which reportedly did not go over well with NASCAR at all.

I, too, will take SPEED's coverage over nothing.

But if SPEED is going to keep running non-speed-related shows in prime time, they really should change their name and they ought to be come with a new slogan

Hey, something is better that nothing. And they're coming up to our little track to tape our East series race!!!

SPEED is trying to cater to MTV fans, not real race fans. Too bad the only people that can find or want to watch SPEED are mostly auto racing/NASCAR fans who flip on it almost every night hoping to get something NASCAR or close to it and instead get some lame show and switch it off.

Oh no another race to try to remember to record.

OK dear Sophia, you need to come up with clever call letters for SPEED.

What are they thinking? Yeah, we can DVR the races but, it doesn't mean we're going to watch them. Are others like me with good intentions of watching something saved and then erasing w/o watching it?

JD, I saw, heard or read sometime back that the Neilsens were going to start counting shows being taped in their viewer numbers. Has that happened? Or is it still live viewers?

And they're coming up to our little track to tape our East series race!!!

Yeah, but if you're at your "little track" for the race, it doesn't matter if the thing is on TV.

JD, I saw, heard or read sometime back that the Neilsens were going to start counting shows being taped in their viewer numbers.

Keep in mind that you still have to have a Nielsen meter or diary for that to count.

Wow..you are catching me on a very slow day...best I can come up with for SPEED is to leave the "S" out of the name.

Since SPEED whizzed away ALL THE GOOD racing shows it USED to have, gone.

But that's not a nice nikname..so will have to come up with something else..I love the guys on the network with racing!!!..just detest the PD choices for the station!

Or maybe they should call it SPED..A past tense and a past participle of speed since the station is RARELY about 'racing' between infomercials, junk shows and extraneous racing shows full of bloatware (self promotions)

@ Anon 8:28, yes, I realize that. My question was do taped things count in the numbers?

@ dear Sophia, SPED is a good one. PEED is funny but, I have to agree with you that it's not nice for the reasons you stated.

As a Steve Park fan, I follow the East Series... or at least try to but it's getting increasingly hard. Showing an one hour tape-delayed condensed version of the races weeks after they took place is all but useless to me. I have very little interest in watching heavily edited versions of races for which I already know the outcome. On top of that eastseries.com which used to do detailed coverage of every race, will no longer be doing so. To their credit Nascar.com is going to offer lap-by-lap coverage of every East and West race this season but it just seems like the Camping World Series are getting less attention and exposure at a time when they could use more of it, and it makes it tough for us fans who want to follow the racing in those series.

Nascar can't get their times right at all.. It's now 3pm EST for the Truck Series?? Lol.. I'm at work and I'm NOT messing with recording it.. But, this goes along with running Cup races until after 10pm SUNDAY night when my family is setting down in bed for the work week here on the east coast.. Never have I seen NASCAR make so many mistakes.. They are turing their back on everyone on the east coast with these 6pm starts on a work night in the Cup Series.. Notice I don't use the advertisers names? That's because they will be different soon enough and it's easier that way.. Back to trucks, who wants to watch a race they already know has won? That, is the ultimate in bordum to me..

While 1 hour from sadly arriving home from our Daytona trip :-(

Dot...ditto on having good intentions recording stuff and not watching. Have gradually been deleting a number of "race" things as we were returning home.

To make matters worse...this week off after only 4 races deflates the excitement of starting the season. Not sure which "genius" came up with that. Reduces my enthusiam to "watch" anything I recorded. "Ouf of sight, out of mind"!

It turns out now the AMA Pro Racing motorcycle racing on Saturday night experiement has failed. Fan complaints led to Speed and Daytona Motorsports Group agreeing to abandon the Saturday night slots and go to move to same-day coverage and likely more live races, plus live coverage of the three major international road races (the World Superbike race in Toele, Utah on Speed, and the MotoGP class for the Red Bull United States Grand Prix at Laguna Seca (MotoGP class only races, on Fox) and the Red Bull Indianapolis Grand Prix (MotoGP on Fox, 125 and 250 on Speed).

That leads to the story of "Pimp My Ride" reruns -- MTV Networks (which did the show) provides some of Speed's original programming, as the MTV and NBC Universal jointly-owned Alliance of Action Sports produces the television broadcasts for DMG's AMA Pro Lucas Oil Motocross Series. Speed often airs live coverage of AMA Pro Motocross live.

The Camping World Series' 2009 season-ender, the Toyota All-Star Showdown (the "national championship" race for the two series that is non-points), will be live on Speed (January 30).

The Camping World races need better exposure because it helps -- the Modified race will air on same-day tape that leads to the Truck race.