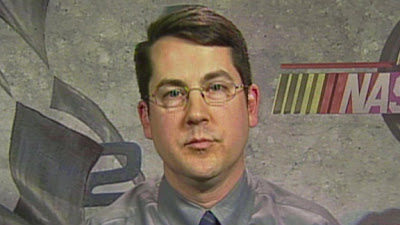 Thank you for taking the time to stop by The Daly Planet.
Posted by Daly Planet Editor at 4:30 AM

Except for the occasional Tom Higgins piece, there is not a better writer about NASCAR than Ryan McGee. He could not be on N-Now too much.

From the first days that Totally NASCAR took to the air Ryan was behind the wheel and made it a solid show that over took RMP Tonight in a short 6 months. No fancy offices, no highend edit bays and just one office trailer tucked into a back parking lot in Charlotte. Yes, the "Totally Trailer"

As Ryan will tell you I have always been a big fan of Ryan's writing and continue to hound him to bring back Racy Ryan.

Whatever Ryan does is right on track with facts to back him up and a history of the sport second to none. There is no better writer in NASCAR.

Enjoyed the program tonight. Not surprised that Mark will drive next year. Ryan presented the story very well as expected. I wanted to also hear from Mark also.

I really enjoyed listening to Ned. Really miss him on tv.

Could the fact that not all interviews are live be part of the reason why Nicole Manske didn't ask Ned Jarrett about Mark Martin returning full-time in 2010? The interview may have been taped earlier in the day, or possibly on another day.

I haven't watched it yet, so I don't know, but was Nicole wearing the same clothes during the interview as she did the rest of the show? I've noticed a change of clothes with other hosts before between interviews and the actual show.

Your comment is one of the reasons I always find it strange that NASCAR Now rarely uses location graphics on the liveshots.

Fans don't need to be tricked, they want the straight scoop. If something is from earlier in the day, tell us.

I worked with Ned on Inside Winston Cup Racing back in the day, he is a great guy.

I really enjoyed McGee. What a great story about Pearson & Yarborogugh I never heard that before. And what a delight listening to Ned Jarrett but what a waste of a question asking him what the best race he ever called. Yes, Evernham, McGee & Craven might be a good trio on the show.

I did not see NN, but I can only imagine Ned Jarrett. What a class act. He just seems like everyone's great uncle who is always so calm and gentleman-like (hence his nickname "Gentleman Ned"). JD, the question about Martin returning would have been a perfect question for Ned, and I wish it was asked. I've always wondered why he retired at age 34, in the prime of his career nonetheless.

Ryan McGee is someone I really did not hear of until he worked with FOX, I believe it was, when they began broadcasting in '01. I was skeptical in the beginning having never seen him, but he is just full of a million racing stories, and reports in a very poised way. It didn't take me long to become a Ryan McGee fan, and love all of his work.

I agree the journalists of NASCAR on ESPN need to be featured more than the on-air crew we see at every Nationwide and Cup race. I feel that we see enough of their opinions and such during the weekends, it becomes redundant during the week, even if the stories differ in some way. If I were ESPN, I'd feature Ryan, Ed Hinton, or Marty Smith every night. It would certainly build some credibility to a show which is relatively new (3rd year).

It is fascinating the amount of press Mark Martin gets for still racing at 50, while the only attention Morgan Shepherd (at 67) gets is when he trips on a hole while rollerskating, even though the last driver over 50 to win a Cup race before Mark Martin was Morgan Shepherd.

I agree, but if the media were to have to choose between Mark and Morgan, they'll pick Mark every time. He's won more races, he races in Cup, he's more of a high profile, more "famous" driver than Morgan.

I will say this, Morgan Shepherd deserves a lot more recognition than a 10-second clip of him on roller skates before Cup qualifying. He's running the No. 89 team out of his own pocket, I believe. Plus, with help from drivers like Tony Stewart, he has been able to put together several respectable finishes. I wish he did get more TV time, but Mark Martin will always get the nod over Morgan.

It's always a pleasure to listen to Ned Jarrett. He's truly a class act. DJ proves that the apple doesn't fall far from the tree. Mc Gee was interesting to listen to. Manske repeatedly stumbled through that one interview.

@jack from PA: in re: ned jarrett's retirement from racing. may 24, 1964, charlotte: jarrett and junior johnson got tangled up on the track and fireball roberts swerved to avoid their wreck, hit the wall and burst into flames. jarrett climbed out his own car -- also on fire -- and was the first person to reach fireball roberts. as jarrett pulled him from the vehicle, roberts is reported to have said "my God, ned, i'm on fire!" jarrett suffered burns to his hands as he worked to help pull roberts out of the wreck. roberts died from pneumonia 39 days later.

jarrett said he wanted to go out on top and he did. but clearly the roberts' wreck and fireball's death shortly after had an impact on him.

Ned Jarrett has some really humorous stories he can tell about racing and announcing. As I recall it, once he called an unexpected pit stop on the radio by sound on his way back from the portolet.

I think it would be really super to have Jerry Punch interviewing people like Ned Jarrett, Richard Petty, Junior J., Ken Squier, David Hobbs, etc. from the NASCAR Hall of Fame - maybe as a Wednesday NASCAR Now segment and expanded on EESPN Classic.

Tangential to this column: It's a shame there was no column about May 8th's edition of NN: Nicole Manske continues to do journeyman work as host, and though she's not yet grown into a "personality" she has definitely grown. Last night she hosted a show with two outstanding pieces, one a taped interview with David Pearson and Ed Hinton, which I only caught the end of and didn't see who else was there. Hinton and Pearson were very entertaining.

Most importantly Nascar Now chose to do what ESPN is best at: a live remote interview with Ricky Craven and Kurt Bush discussing their legendary finish at Darlington in 2003 (year?). Bushand Craven described the last few laps in detail (I'd never known that Kurt lost his power steering at the end of that race) face to face in director's chairs in a studio. Manske left them alone for several minutes and just let them go at it.

The combination of Bush & Craven's comfortableness with TV and one another was wonderful. I will remember it for a long time. Nothing like this has shown up in any of my NASCAR viewing this past week.