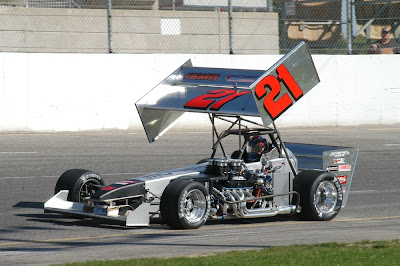 Click here for the original story from the MLive.com website. Benson was racing his SuperMod (shown above) and wound-up in an accident that caused a fire.

Click here for the WZZM follow-up story that listed Benson in serious condition at a local Grand Rapids, MI hospital.

Report was that JB was awake and alert when removed from the car after the fire. These are high-speed open wheel cars and are a handful.

Click here for an article where JB talks about his new supermod and racing.

Sunday morning update: JB is resting in the hospital and told his sister Barb that she looks worse than he does. I will take that to mean he is going to be fine. One broken rib on the injury report right now, more info when available. (Get some sleep Barb!)

TDP will continue to update this information. Benson is a NASCAR favorite for his personality, his driving skills and his many years on TV with Michael Waltrip and Kenny Schrader on Monday nights.
Posted by Daly Planet Editor at 12:00 PM

Ouch. We don't need to lose Johnny. He is too good a guy.

No. Can't be happening. Johnny has to be okay.

He's definitely in my prayers tonight. Prayers to the entire Benson family

Such awful news. My prayers are with him and his family.

I hated hearing this...Prayers to Johnny and his family...hope we hear updates soon.

News is saying awake and alert when removed from the car after the fire.

Checking with his sister who is a TDP reader and the head of his fan club.

One of the all time good guys. Prayers for Johnny.

I just saw this via jayski, shocked to read it.

Deft in all our thoughts and prayers here at TDP, will be awaiting further updates.

Best wishes to JB and his family, my prayers are with them.

Thanks for the update JD! I'm so glad that it looks like he'll be OK!

Man, JB is having a tough week. First losing his truck ride, and now this, which probably wouldn't have happened if he had kept his truck ride. I really hope he'll be ok, at least he's stable.

I don't know exactly what happened, but I've always wondered about the safety at Berlin. Went there a few times before I moved to Detroit last month; Berlin doesn't even have a wall on the backstretch, this sounds like it was in the turns so I hope that wasn't part of this, but I wish they would get around to redressing that.

One of the good drivers in racing. prayers to JB and his family.

woodtv.com has more pictures of the crash. Just one last night, seven this a.m.

oh no! prayers to the benson family and to johnny for a quick recovery -- we need him back in the trucks! he is one of the truly good guys in the sport and a racer's racer.

woodtv also has a video report and some video of the accident as well on their main page.

Fire can be scary but it sounds like he'll be fine. JB, get out of the hospital fast!

Prayers to JB and the whole family

Thoughts and prayers to JB, man he has had a seriously bad week. I seem to remember that he originally was going to retire at the end of last season to run his modified, this just sucks

I will keep JB and the family in my thoughts. He's one of the good guys.

Come on, JB -- get up on the wheel and get well quickly.

Prayers & good thoughts to JB & his family. Thanks for the updates, JD!!

Johnny Benson is one of the class acts in NASCAR. It's an absolute disgrace that he's currently without a ride in any series. If he's racing where he belongs, he doesn't have this wreck in a Supermod race.

I'm truly happy that he's going to be okay. My thoughts are with JB and his family.

Holding good thoughts for Johnny to mend quickly. He is one of our good guys and he has more fans than he realizes.

I'm running behind this morning. Just read this.

Since I know JBs fan club reads TDP, I want to say get well soon JB.

I am soooo glad JB seems to be going to be ok, when things go sideways they really go don't they? I hope he recovers soon.

Good luck Johnny. You are in the class of Mark Martin in racing!!!

Ron F, ditto - well said. I do hope JB has a full and speedy recovery.

Missed you at Michigan! First truck race for us. Get well soon JB!!!

Saw his interview after getting out of the hospital, great to see that Johnny is in good spirits and ready to start getting back to working on the car! That's a racer right there to say the least. Hopefully in the next couple weeks we will hear some news regarding the remainder of the truck season.

Just really great to see he is alright, and had nothing but good things to say about the safety crew at Berlin and that the car held up well