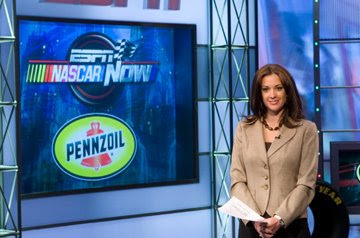 Nicole Manske kicked the TV day off with NASCAR Now at 9AM on ESPN2. Manske has Boris Said in the studio and both Marty Smith and Angelique Chengelis at MIS. This one hour show also features a wrap-up from Jerry Punch and his Nationwide Series TV team.

At 10AM, Adam Alexander reviews the past couple of days in racing on SPEED's NASCAR in a Hurry. This show uses video clips and offers a sometimes humorous perspective on the weekend's activities.

The franchise is up next as RaceDay hits SPEED at 10:30AM. Two hours of programming will include interviews with Tony Stewart, Roger Penske and even MIS Grand Marshal Kid Rock. John Roberts hosts with Jimmy Spencer and Kenny Wallace alongside. Wallace should have the latest news on his friend Johnny Benson. Wendy Venturini and Hermie Sadler are the reporters for this program. The show is on a bit early to avoid a conflict with the ninety minutes of TNT pre-race programming.

The first TNT pre-race show is NASCAR on TNT Live at 12:30PM. Marc Fein hosts Kyle Petty and Larry McReynolds from the infield stage. Guests will include Richard Childress and Clint Bowyer. Kid Rock will also stop by. This show has a fun twist as Petty provides updates and photos on Twitter while the show is in-progress.

TNT is quickly getting known for its quality features. This week Ralph Sheheen visits Jack Roush and gets a tour of his extensive car collection. Libdsay Czarniak goes into Race Control and gets an explanation of how they figure out the double-wide restarts during the race.

Wally Dallenbach offers another version of Wally's World featuring the big MIS track. This feature will appear on the final pre-race show called Countdown to Green. This thirty minute show comes directly from the announce booth and Dallenbach is joined by Bill Weber.

TDP will be live blogging the Sprint Cup Series race at 2PM. Please feel free to add your comments on the pre-race TV programming to this post. To add your opinion, just click on the comments button below. This is a family-friendly website, please keep that in mind when posting.

Thanks for taking time out of your Sunday to stop by The Daly Planet.
Posted by Daly Planet Editor at 9:14 AM

Can you say DVR, start late FF and catch up live by the time the race starts.

Can someone explain to me why TNT needs 2 prerace shows? But you gotta love the Ponytail Express

It's odd how TNT has 2 pre-race shows, yet both are so much better than what FOX offers that watching them isn't such a bad thing.

If you like NN and RaceDay, however, then I guess 5 hours of pre-race programming can be a bit much.

TNT should convert some of that 90 minutes of pre-race into a longer post-race show instead of going off-air early.

Nothing like waking up to Race Day for breakfast followed by TNT's pre-race show for lunch. Missed Nascar Now at 6am due to sleep. It's overkill IMO--heck, it's not even the last ten races.

Too much useless information. All I want to do is watch a race.

Wendy, Hermie and John Roberts make for a pretty good show. Jimmy and Kenny are getting a bit stale.

I like having this much pre-race. It's all optional, so if you don't like it, you don't have to watch! Just shows how well NASCAR is doing if they can have 5 hours of pre-race shows across 3 networks for a mid-season race.

Looks like a nice day for a race. Always windy there. Remember, MIS is known for trash on the track. One ill-fated hot dog wrapper can ruin the best cars day with over heating problems.

A little too much pre-race stuff for me, but I'll end up watching it because I like to. I'll be worn out by the time the actual race starts.

Way too much pre race. I DVR it & later when I have time &/or hear something was good or interesting I watch & FF thru junk.

Instead of all the pre race hoopla how about some post race? If we could get a post race show with interviews of many drivers instead of the Speed race recap ( uh we just watched it) that would be excellent!

At least Wendy got into the fans today and almost actually talked to one.

Sooner or later, SPEED will wake-up.

Why haven't they said anything about JB??

Told they did twice, I just plain missed it.

well, I missed it too. but I am running around & not planted in front of the TV.

The complaint with too much pre-race is this : we want information about the race. A 30 minute preview is all that's needed. All of this other stuff would be much better as a DAILY motor sports show, they could have all of the profiles and human interest stories then and leave the pre-race for actual race information.

Getting nonstop pre-race hype from 9 AM to 2 PM is great for the NASCAR fan but it's a complete embarrassment that after all those hours of pre-race hype and 3-4 more hours of racing, the NASCAR fans gets basically nothing for immediate post-race information and analysis. On our luckiest day we get a winner's interview, 2-3 quick driver soundbites, and a few quick rushed soundbites from the analysts as the network is showing the results/points and rushing to get off the air and start their next program early and completely unadvertised. Then the TV screen goes blank and we get absolutely no fresh NASCAR TV content anywhere for the next several hours, but for a couple quick questions from the post-race news conferences on non-football weekends.

JD I think it was NN that mentioned JB twice. I'm watching DVR of RD so far nothing and I'm only 20 minutes behind. It should have been in the first 10 min. IMHO

SLF I sort of get why there is more pre race than post race. They have a know time for prerace but.... if they started the races earlier and at the same time the window would shift and postrace could be longer even if the exact time is unknown. (I'll throw them a pass if it's red flagged for a long period)

Let us know what she says Bevo please...

Wendy obviously has a very special relationship with Tony and not a lot of people can say that.

Today is the first time that I can remember that I missed RD. Slept and showered right through it. I figured TNT will rehash what's going on.

My word veri is unreek.

JD I think RD lied there is no way I could have missed 2 comments RE JB, must be on the cutting room floor, um wait isn't this a live show

Broken rib, resting. She sounded pretty tired understandably and still a bit shaken. Thanked everyone for their concern and said any updates would be on his web site and the Berlin site.

The thing I noticed during Raceday (as I was doing other things in the kitchen), was the overuse of 'The Fans!' during the show. I guess it tells me that Nascar is starting to realize that they are in trouble. The majority of the A** kissing today was gushing about the fans. Amazing that they didn't seem to notice when they had everything going their own way. Now, with attendance and ratings sagging, the Big Three in Big Trouble, suddenly they think about those 'loyal fans'. You know, the ones that they have ingored lately? The ones that have been told to shut up and buy tickets and quit bitching about things like the 'Chase', the CoT, the Top 35 rule, and losing the Southern 500 at Darlington and any race at The Rock. I think it may be too little too late.

Meant to say at least one broken rib

They all need to lose the Double file restarts "shoot out style" we did it last week in Pocono so should it now be Pocono style.

Wow, I can't believe they're actually showing this footage. Haven't seen it in years.

I liked the DW segment. That's the DW I love.

I like all the pre-race stuff. I have a small enough house that I can run around and cook or even go sit on the deck if I want and it makes it more like being at the race for me. If I WAS at the racetrack I'd be running around for all those same hours, just not making beds and supper!

Any idea what happened to the Roush segment?

Oh, and I hope that FOX noticed that DW can be quite a good commentator when he isn't acting like a loon.

Been saying it for the past year now, we don't need THAT much pre-R.

I know it is only pre-race, but those stands are empty!

They're talking about S&Ps.

There is a new post up for the coverage of the MIS race on TNT.

I do agree I would like more post race interviews, info, etc. With that said, people don't need to watch pre race shows if they think it is too much. I DVR, then pick and choose what I watch. Also, I am usually on my laptop or reading something...so I don't sit glued to the TV.

The other comment regarding pre race shows...appears the majority, if not all, of the posters here are major fans and watch practice, qual, race, read internet, watch other race shows on TV. We the be majority here, but I think we are the minority when included in all the actual race viewers. I have two brothers who consider themselves big race fans and always watch "the races". They only occasionally watch practice, qual, etc. So, what may be redundant to us, is news to them.

Last comment. Replace Jimmy Spencer with Kyle Petty and calm Kenny down, or replace him. Agree with Frank in Sebring...Jimmy and Kenny are getting old.

I haven't watched a pre-race show since sometime early this spring. Just too busy!
Besides, all it is is a rehash of what we read all week on Jayski's, Daly Planet among others.
Once I get a DVR, I'll probably save more time watching the race too. Especially when a sometimes boring race is on (like Michigan?)

Not on my TV they don't.

One thing I'd like to see them demo in pre-race is how much time is lost on a green flag stop. Put Wally & Kyle in cars, have one pit while the other continues at speed and see the relationship when then come out and get back to speed.

They talked about it in the pre-race and that coupled with the double-file restart the effect on pit strategy.

Its going to vary from at each track and rather than having us take Larry Mac's word on it, just show us each week.

I caught a little bit of Raceday it was so nice to see Wendy in the audience. I do have to agree that there seemed to be a lot more "oh thank goodness for the fans" rhetoric than usual. What somebody finally noticed that without the fans, there won't be anyone to watch all this!

However, I did NOT watch TNT's 2 pre-race shows. Too much for me. As pointed out, it's optional, so I opt out.

I watched part of the race today, but honestly followed more through Racebuddy and the scanner than by watching the TV coverage. It seemed like every time I tuned the channel to the race, the broadcast was in commercial, so why bother to even watch? I did watch the last 20 laps and honestly, I know everyone keeps saying how "exciting" the finish was, well, not really, nerve-wracking? tense? but not exciting. Exciting would be an actual side by side race to the line.