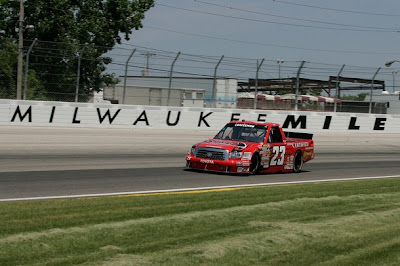 Update: CWTS race is postponed by heavy rain. SPEED will have live coverage Saturday at 1:30PM ET. We will be here to live blog the telecast.

The beating and banging of the original truck series should return this Friday night as the now Camping World Trucks take to the flat one-mile oval known as the Milwaukee Mile.

This is a critical time for the series, but all the elements seem to be in place for a good show. There are 34 trucks entered, with a handful expected to end the day early.

There is some added sizzle in the field this week with the likes of flat track ace Dennis Setzer, veteran Mike Bliss and former Cup driver Aric Almirola. The CWTS regulars like Ron Hornaday Jr., Mike Skinner and Todd Bodine are also in Milwaukee.

Ricky Carmichael is behind the wheel for Kevin Harvick Inc. this weekend with his Monster Energy Drink sponsorship. Jack Roush just announced that Colin Braun will be fulltime in the Nationwide Series in 2010 and he is in the field as well.

Finally, one driver with a little something to prove is Johnny Sauter while rapidly improving Tayler Malsam will be driving a Toyota for Randy Moss Motorsports.

Krista Voda will start the TV night at 8:30PM with The Setup. Adam Alexander and Ray Dunlap will be her reporters. Once things get underway at 9PM, it will be Rick Allen and Phil Parsons calling the action. Update: Being told by SPEED Michael Waltrip will be in Milwaukee and join the telecast team.

Ironically, the 2008 winner of this event is Johnny Benson. Gone from the CWTS after sponsorship woes, Benson was recently injured driving his hand-built Supermodified car in the Midwest. The good news is that JB is already out of the hospital and on his way to a full recovery.

The CWTS race will cap a long day of coverage on SPEED from both Milwaukee and Sonoma, CA. The Sprint Cup Series will practice at 3PM and then qualify at 6:30PM ET. Steve Byrnes, Jeff Hammond and Larry McReynolds will handle that coverage.

TDP will live-blog the CWTS race, but welcomes your comments on the Friday TV coverage on SPEED. To add your opinion, just click on the comments button below. This is a family-friendly website, please keep that in mind when posting.

Thank you for taking the time to stop by The Daly Planet.
Posted by Daly Planet Editor at 5:00 AM

I really hope that this race and the coverage will be better than the last one. I like Rick & Phil but, I still think they need a third to balance out the booth.

When JB gets better but not well enough to drive, I'd like to see him up there. At least it could help him pay the bills.

I cant wait to be there. I got pit passes for both series and got a brand new camera for the occasion. Im excited

Should be quite the interesting race. Like Dot said, hopefully the coverage will be stronger, it would be cool to have a JB up there if he doesn't have a ride. Like I had mentioned on the JB topic, saw his interview after getting out of the hospital and was glad to see him in good spirits and finding positives in the situation. Can't wait to see him come back, hopefully we get a heck of a race this weekend.

I looked at the forecast for West Allis, WI (where the track is located), and it doesn't look good. The next 12 hours showed storms.

Didn't Benson already have a good ride lined up for this race before he went out playing last week?

Yes, it'll be nice to see the Trucks & NW at the same track racing on the same weekend. I also feel bad that JB can't be driving, but he sounded very positive when they interviewed him on NN the other day. JD - Hopefully, David Starr will have a starr-studded race and win it!!!

I hope that this is a good broadcast too. You know why can't they put Krista Voda in the broadcast booth. She always brings a lot to the pre-race show and would do a great job in the booth instead of someone who is so self absorbed and self serving.

Take good notes everyone I am in the wilds of Maine. Although I admit there is a DSL conecection but no TV. This is first time I've gotten my Nascar FIx since Tuesday's NN. Hopefully rain will not be a problem I can't adjust my DVR from here.

Anon, the plan according to if Kyle got his wish was to have JB in the #51 however BBM had already committed weeks ago, Aric Almirola and Ickler to rides for this race so while Kyle offered the seat, it was still a longshot from what I heard.

Nothing ever got past the offer stage from Kyle to JB.

Don't expect much tonight. We've been having terrible storms all night---didn't get to sleep until 5:30am this morning, with lots of flooding in West Allis and 25000 out of power still this morning. Some areas, like my house, got more than 6 inches of rain in less than 90 minutes. Storms are forecast for most of the day with severe storms starting later in the afternoon and early evening until midnight. I heard that the tunnel that leads to the infield of the Milwaukee Mile was under 8 feet of water but that is receding. It's going to be very hot and humid for most of the day. Better for tomorrow with no rain at all.

Sad to say but the Trucks are on life support.
Get well JB!

At least the race won't be 'stunk' up with Kyle Busch! A race without him, nice!

Thank you guys for the weather updates, could you tell us later in the day how things are going?

JD you said Collin Braun is full-time in NW in 2010, I heard Roush say he will run NW but did not hear where anyone said he would be full-time. Curious to where you got that tidbit.

Any section for Cup practice commentary or can we do it here?

They've gone ahead and cancelled qualifying for the truck race. Once they get the track dried, they'll have 1 practice session. As of now, the race itself would start on time.

Here's a Special Weather Statement from the National Weather Service in Milwaukee (sorry for all caps, as I'm copying and pasting):

What's the issue? I was told Roush is moving him from trucks to Nationwide as one of his two fulltime drivers.

Do you have some info that says he will run a limited schedule? We know how dollars are these days for the trucks and Nationwide series.

@darbar--oh no :( I hope things calm down. It's been wicked everywhere else and a zillion degrees here in TX

Glad to see Mikey will be there. I like the Allen Parsons project but they really need a 3rd wheel.

No issue JD, just from what I read via jayski, Jack had not said anything about full-time, just that him and Steinhouse would run NW next year.

Never heard if it was partial or full-time which is why I asked where you had heard he would be full time.

Inquiring mind is all.

Nice article on Milwaukee - brought a smile to face when I saw that familiar #23 ...

TDP readers and JD - thank you for your positive comments and support during my brother's accident. I'm happy to report that he flew home to Charlotte today along with his family to start his recovery. The support has been overwhelming ...

I also like your suggestion about having him do the television broadcast ... Never gave that one a thought.

Take care and enjoy the races!

I have a desktop app that lets me know the weather (set to the location of said race) so I check every week.

I've got confirmation from driver Tweets... Colin Braun, in the Trucks' case.

Already getting a back-up plan in case.

Thanks Barb! All our best to JB!

Glad to hear about JB! Continued prayers for a speedy recovery.

BTW: Mike Massaro tweeted that NASCAR Now is cancelled for Friday b/c CWS is running long. He says "More for Sunday, I guess."

The Truck race has been postponed until 1:30p.m. Eastern on Saturday.

The time the Truck race will be on on SPEED Saturday, was supposed to be the time Happy Hour from Infineon was to take place. So, will SPEED scrap the airing of Happy Hour altogether? or will they put it on delay? The schedule is pretty tight for SPEED on Saturday. The Truck race will go until 4:00p.m. Eastern, and at 5:00p.m. Eastern they have live coverage of the Rolex race at Mid-Ohio. Any chance of getting this clarified from the The Powers That Be?

There's junk on FOX before the baseball game. Can they move Happy hour to FOX?

Dot, this is just practice, they would cancel airing it entirely before moving it to FOX. Even if it were the FOX portion of the season.

I'd rather SPEED JIP the truck race and show the Cup Practice live. I could care less over the truck series now. Its as good as dead. They need to focus on what is imporatant.