Another Day-Night TV Doubleheader For NASCAR 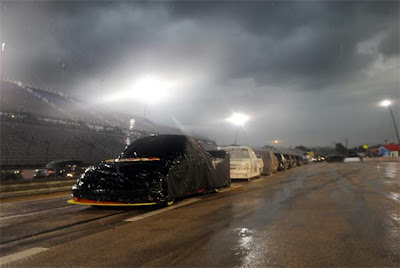 Summer weather has again changed the schedule to put two NASCAR races from the same track on the same day on national television. The rain-delayed Camping World Truck Series race will now run on Saturday at 1:30PM ET on SPEED.

The network's veteran on-air crew of Rick Allen, Phil Parsons and Michael Waltrip will be calling the daytime action live. Ray Dunlap and Adam Alexander will be on pit road. The CWTS was supposed to be under the lights on Friday night before the weather closed in. That put SPEED in a very familiar situation with another NASCAR TV partner.

ESPN2 is scheduled to carry four hours of Nationwide Series action from the very same Milwaukee Mile on Saturday night. Qualifying coverage begins at 6:30PM with the pre-race show starting at 8PM and the race thirty minutes later.

Original schedules are out the window in the TV compound and once again cooperation is going to be key to get through a very long day on two different cable TV networks. Additional rain may twist things even further.

Dale Jarrett is off this weekend, so Rusty Wallace will be the one doing double-duty. He will join Allen Bestwick and Brad Daugherty for the pre-race show. Wallace will then step into the broadcast booth along with Jerry Punch and Ray Evernham to call the race.

TV viewers will once again get to see two different production teams offer two races from the very same track using very different styles. Over the years, the SPEED coverage of the trucks has become a familiar formula. Focused on racing, stripped of special effects and comfortable to watch.

ESPN is in the third season of Nationwide Series coverage. Marty Reid will step in and call the remainder of the races beginning in late July. This will give Jerry Punch a break as he was tasked with calling all the practice, qualifying and races for both the Sprint Cup and Nationwide Series from July through November.

Breaking this up is a great idea and Reid has just the sense of good humor and racing smarts to make the final months of the Nationwide Series fun. As most fans know, once college football begins, the Nationwide gang often finds itself skipping around the ESPN family of TV networks like a fullback dodging tackles.

Punch will get to focus on the Sprint Cup races and try to get some positive momentum going for the sport at a very tough time. TNT is putting on a good show, but the ratings are still below last season. Hopefully, the Sonoma race will be changed drastically by the new restart rules and make for good TV at last.

Additional NASCAR TV programs on Saturday include NASCAR Live from Sonoma at 12PM ET with John Roberts and Hermie Sadler. That will be followed by the early final practice session for the Cup cars at 12:30PM. With the amended schedule, the Trucks should follow next weather permitting.

Special thanks to Dak Dillon for an exclusive picture of the rough weather in Milwaukee Friday night.

TDP will update any TV schedule changes early Saturday morning. We welcome your updates, information or comments about the topics on this post. Just click on the comments button below to add your information or opinion. This is a family-friendly website, please keep that in mind when posting.

Thanks for stopping by, see all of you Saturday for some good NASCAR racing on TV.
Posted by Daly Planet Editor at 9:30 PM

Weather won't be a problem at Milwaukee on Saturday. Nothing but sunny skies are on the docket.

Sorry I'm gonna miss all this, since I start vacay tomorrow morn! I will miss blogging while watching the race...and the gang! Think I mite get to see the Cup race Sunday-otherwise, I'm gone w/Nascar news for the wk...:(

It just amazes me that the weather in Milwaukee can be so bad tonight and then so beautiful tomorrow.

@ PammmmmH, (sorry, had to do it), have fun. We'll miss your comments.

Thanks Mike, that is great news.

I don't remember rain having this much of an effect on the NASCAR schedule ever. Next thing you know it will rain in California Sunday.

Weather is supposed to be warm and breezy here in the San Francisco Bay Area. Temps in the low to mid-80s. No chance of rain in the forecast.

West Coast Kenny (who will be working during the race.)
Alameda, California

Was disappointed with the weather last night in Milwaukee but today should be good racin'. I will be happy once Marty Reid starts calling the NW races, he'll bring some excitement to the broadcast. What's up with DJ - lucky for him to be able to spend a lot of time off. Wish it was RW though.

What's up with DJ? He seems to be off more than a third string quarterback!

JD, any word on whether they will show Cup happy hour on SPEED? Can't find anything and no tweets yet...

I was also wondering about Happy Hour. any news?

If I were to assume, television coverage of Happy Hour has probably been scrapped.

SPEED will only have an hour in between the truck race and Grand-AM race, and by the time the Grand-Am race is over, the Nationwide race will be starting on ESPN2, and that goes until midnight Eastern....it's highly unlikely SPEED would run happy hour against the Nationwide race.

There is a new post up for the Camping World Truck Series race on SPEED at 1:30PM.

Here is the scoop just in from SPEED:

Happy Hour at 4PM and then the Rolex race joined in progress at 5PM.

Thanks for the update guys!

ooops, I meant joined at 5PM. The sports cars will start on time.

Come on, you know how it works here. Share your views with us.