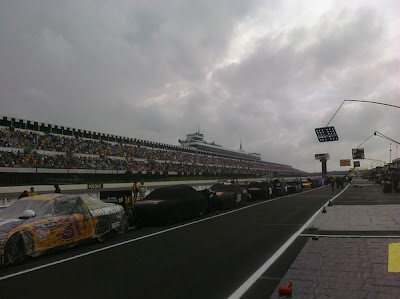 It's not just the teams and officials that have to scramble to deal with rain delays in the Sprint Cup Series. NASCAR's remaining two TV partners, ESPN and SPEED, had to make a whole lot of changes on the fly due to the wet weather.

Fans saw the NASCAR RaceDay gang run inside at Pocono when the rain was really coming down at 11AM on Sunday morning. Eventually, the trio of Jimmy Spencer, Kenny Wallace and host John Roberts made it outside to the SPEED Stage. Wendy Venturini and Hermie Sadler both did an outstanding job of chasing down the interviews and news despite the weather. Venturini was the only TV personality all day long who told the truth about the rain.

The RaceDay gang is going to stick around and provide a one hour pre-race show on Monday at 11AM ET. ESPN will only be covering the race, so this will be the old style of RaceDay, with the show leading right up to the green flag.

The ESPN crew from the Infield Pit Studio and Tech Garage flew back to Connecticut Sunday night. Originally, the Monday one-hour version of NASCAR Now was scheduled to be the annual pit reporters show. Instead, Allen Bestwick will be hosting Rusty Wallace, Brad Daugherty and Tim Brewer in the ESPN2 studios for a live version of the show.

ESPN's four pit reporters will stay behind, dry off and get ready for a full race on Monday. Joining them will be Jerry Punch, Dale Jarrett and Andy Petree upstairs in the broadcast booth. These three got an opportunity to loosen up and tell the TV viewers some stories on Sunday afternoon. The on-air change was amazing.

The strength of the NASCAR on ESPN line-up is their experience. That is often lost in the carefully managed and scripted world of the current ESPN production philosophy. When Punch, Wallace and Brewer got some time to tell some stories it really showed what this team could be if the ESPN management loosened the reins.

Sunday night, SPEED plugged NASCAR in a Hurry and NASCAR Smarts into the timeslot normally held by the Victory Lane show. That program will air at 8PM on Monday and take the place of This Week in NASCAR. Kasey Kahne was going to be a panelist with Michael Waltrip and Steve Byrnes, no word yet on rescheduling him for a future show.

ESPN cancelled Sunday night's one hour NASCAR Now show and just extended the XGames coverage. No word yet on a Tuesday night version of NASCAR Now. Once the race is over on Monday, ESPNEWS will have coverage from the track, including the live press conferences from the media center.

It would be a mistake not to take a moment and point out the tireless work of Allen Bestwick during the almost four hours of ESPN's marathon rain delay coverage. Bestwick is an organized and deliberate TV professional who likes to come in prepared and exit without a sound. On this day, he served as the backbone for ESPN and once again let the other panelists have the spotlight.

TDP will be live blogging the pre-race show and the race beginning at 11AM. Stop by and leave us your opinion of the coverage. For those of you recording the race, program in some extra time as the threat of rain is still in the area on Monday.

We welcome your comments on the Sunday TV network scrambles. To add your opinion, just click on the comments section below. This is a family-friendly website, please keep that in mind when posting. Thanks for taking the time to stop by.
Posted by Daly Planet Editor at 10:15 PM

The best part of the rain coverage were the stories from Rusty, DJ, AP and JP. Yes, I said JP. He is great when story telling. Now we know why they wear fire suits on pit road. That jack story was great. I'd seen it before but I didn't know the story behind it.

I only saw the last hour of RD. Wendy is the best. She brings out the best in the drivers she interviews. They truly seem to like her.

I read that it may rain again tomorrow. Then what?

I'll cheat at work and see what's going on at TDP.

I tried to bring in some new fans this year to Nascar..However! The rain washing out qualifying,and the Racing have led them to ask me why I would waste my time on this waste of time! I did not have answer for them!

@ Lesley, regardless of the rain, Pocono is probably not the race to bring in new fans. Same for Michigan.

If they like road courses, WG will be good.

If you can wait, have them watch the Bristol race on the 22nd.

The unscripted moments with the story telling was the highlight of the day! It reminded me of the program years ago with many of the 'old timers' sitting around doing nothing but telling stories about 'back in the day'. What a shame not to take advantage of that sort of insight. It reminded me of why I became a Nascar fan so many years ago. I hope someone at Nascar thinks to record much of that to include in the HOF. It pointed up why JP's talent is being wasted in his current position, and why so many of us still respect his knowlege of the sport.

@sally b: i can't agree more! it is a major source of frustration for me that there are all these great stories "out there" and no one has put them into a program for fans, new, old and especially casual!

when i've become a fan of a sport, it was partly b/c of the sport itself but also b/c of the stories around the sport, stories of the competitors. not the stories that involve lots of serious narration and pronouncement but stories of the goofiness, the humor, the behind the scenes stuff. that's what made it interesting to watch: i knew some of the backstory.

the best part of yesterday for me was the too brief segment on pit roads w/the gang. great film, great reminscences from those who were there, laugh out loud funny and interesting. it reminded me of two things:
1. dr jerry punch belongs on pit road again, where we can listen and learn from him.
2. i love our sport when it's at it's least scripted.

I've been a more serious fan for about 12 years...back then, there were still active drivers who'd been there 'in the old days' who still told those stories. They're mostly gone or broadcasting now. Anyways, my favorites from this weekend were Kyle & Steve doing the ARCA race, and the old time stories from the guys. I'm at work today so I'll have to keep up via internet. I was so surprised to see NASCAR in a Hurry instead of Pinks!

I don't like it that nascar.com or espn.com will not be showing the race today as many of us are "working" today.

@Lesley--I hear you. Every time in the past that I've convinced someone to check it out it's RAINED!

Yes it was a nice rain delay yesterday hearing the stories of what it was like so not long ago! Hearing about some of the things that sparked changes from those who were there. I loved the one where BP I believe it was, couldn't come in for his pit stop because they were eating their ice cream!

I thought ESPN did an excellent job with the rain delay show on Sunday! They had those pre-recorded features ready to interject between driver interviews and the stories by the booth personnel. Awesome show! Without the silliness that always happens during Fox rain delay shows. ESPN is a professional network that doesn't need to stage watergun battles between their personnel or forcing the viewers to listen to the pompous ramblings of DW or Larry McReynolds. Punch, Bestwick, Wallce, Jarrett, and Petree did an outstanding job keeping me interested on Sunday and keeping the viewers informed of the status of the weather and track drying.

What is the weather situation like today? Are delays expected, or are they on schedule for the 12:15 green flag? Thanks

I can't say enough about Venturini. It seems that she is trusted and respected by all in the sport. She showed once again yesterday that she has 'the touch'!

My favorite NASCAR races are the ones that happen on Monday. It seems like the announcers are more relaxed, the focus is more on the racing, the pre-taped segments have been exhausted, and the tech-segments-for-new-folks are missing.

Pretty sad that it takes rain to show us how great NASCAR TV can really be. Because of the fun and unexpected segments I watched nearly all of the coverage.