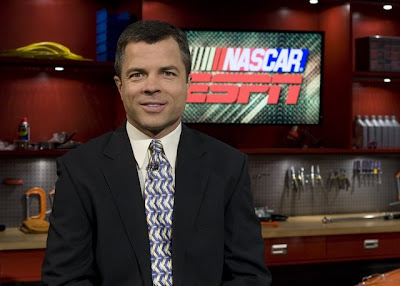 While the second race in the Chase did not live up to expectations, Monday's NASCAR TV talk shows boast a stellar line-up of personalities. It may well be that fans get more bang for their TV buck now that the race is over.

The "3 R's" are back for ESPN as Ricky Craven, Ray Evernham and Randy LaJoie join host Allen Bestwick on the 6PM version of NASCAR Now on ESPN2. Bestwick has put his stamp on this one hour show and these are clearly three of his favorite panelists.

While Evernham has struggled in the field, he excels in the studio and offers a veteran perspective that is unique. As a championship crew chief and a major Sprint Cup Series owner, Evernham can draw on a wide variety of experiences.

Craven is the most polished TV pro on the panel and continues to be the best studio analyst on the NASCAR scene. His observations are very personal and both his good and bad experiences in the sport often come into play in his comments.

LaJoie is the irreverent character that every panel needs to keep its feet firmly planted on the ground. He has become much better on TV this season and worked very well with Mike Massaro in the studio on the Sunday preview and review shows.

Bestwick has a lot of material to draw from, including the Logano wreck and the continuing Hendrick dominance. Ongoing sagas like Pat Tryson and Martin Truex Jr. could also be on the menu. The silly season is in full swing.

This program has established itself as the flagship for the ESPN NASCAR franchise. After dealing with a wide variety of panelists over the last year, Bestwick now has a core group that works well together and moves quickly through a lot of information and highlights. This week has the potential to be outstanding.

Over at SPEED, things took a strange turn with the recent addition of Jimmy Spencer to the TWIN panel for the remainder of the season. Originally inserted on a weekend where Michael Waltrip was absent, this Monday marks the first time that Spencer and Waltrip will be working with Chad Knaus as the third panelist.

Steve Byrnes hosts the program and knows all the panelists quite well. What he does not know is how they will interact for the first time during the program. This show is taped in the afternoon for an 8PM airing, so don't expect any big issues to arise.

What should be fun to watch is the controversial Spencer mixing with the ultimate NASCAR apologist in Waltrip. They will both be speaking with the crew chief who led his team to the race win in convincing style.

Knaus did not get Waltrip at first on this series, but settled into a very funny relationship with him on the air. Waltrip gets to retain all his wacky behaviors while Knaus now simply delivers his analytical crew chief answers totally unfazed.

The addition of Spencer is a positive for the show that was struggling with only two panelists. Two voices can only present a difference of opinion while three can form a group discussion on any issue. These three should be fun to watch for the first time.

TDP will offer a wrap-up column once both shows are done, but please feel free to offer your opinions before and during the shows on this post. This is a family-friendly website, so please keep that in mind when you are clicking on the comment button below to add your opinion.
Posted by Daly Planet Editor at 12:30 PM

TWIN (or whatever it's called now) has been dead to me since 2005. My viewership of that show ended immediately after they made the moronic decision to replace Bestwick & Johnny Benson with Dave Despain & Vickers. I know that's ancient history at this point, but they tried to fix what wasn't broken.

Steve Byrnes didn't save the sinking ship when he replaced Despain. I tried to watch the "new" show with both hosts & it just didn't do anything for me.

Here is an idea for you. How about you watching this Monday nights TWIN program and give us a review? Maybe a qualified, fresh eye review, perhaps?

Some things never change, but are you the same person you were in 2005?

Monday's NN is typically an excellent review of the weekend's Cup racing with excellent video and studio analysis. I have no idea what niche Twin is trying to fill. Byrnes is mis-cast and Waltrip is insulting to listen to. I'm no fan of Spencer,but he did an excellent job last week calling them like he saw them. Tonight, Chad could be very informative,if Waltrip doesn't talk over everyone and dominate the discussion.

Nascar Now last night was pretty good, but they kept on cutting to the reporters at the track saying the same thing over and over and over. I much prefer Massaro & LaJoie going over the race in the studio - just the two of them seem to get along well and have good questions and comments. I don't care for Spencer I think he needs to be removed from TWIN although he's not so irritating as he is on VL & RD.

Josh
I agree 100+ percent
Fox screwed this show and the network when they took over.
No one should be surprised when the genius who brought us "digger" and who also takes credit for creating that camera angle (when it was the brainchild of ESPN Thursday Thunder) thinks he knows what makes good sports tv [hey, I know, lets give the panelists slo-mo controllers]
Dude must be drunk all the time or need more sleep

I will try watching both shows today. You're right, they are probrably more exciting than the Dover race (but of course they wouldn't say that).

I love both Randy and Ricky, even when I disagree, as former drivers their comments are always worth paying attention to.
Probably won't be watching much NN or TWIN this time, the 48 love fest nauseates me. Hopefully they will mention there were some other drivers who did well. But I will be peeking at Spence and MW interaction.

All I can say is the name of the show on Speed at 8pm Mondays is not TWIN!! It's called "This Week In Nascar". Good Gosh!! People need to learn to read the acticle before responding. Twin clearly referred simply to the "twin" panel of Knaus and Waltrip and not the name of the show!! Must of been to simple. Maybe someone, read Josh, who has not watched the show in four years and clearly does not even know the name of it should keep quite. I remember the origional panel of Bestwick, Waltrip, Spenser, and Benson. They worked very well together. The show lost its footing when they took it from a 1/2hr show, to a 1hr show, to a 1.5hr show. 1.5hrs was WAY to long. However, time marches forward, things change. They worked through there issues for the most part. I've watched the show for years and adding Spenser back on the panel will be great. He's opinionated, something Waltrip and Knaus are not, so it will add another dimension.

TWIN=Acronym for This Week in NASCAR.

Has nothing to do with number of people on the show.

Nope, don't think so. IMO, the racing was boring on Sunday and there is no way I'm subjecting myself to Mikey AND Spencer. I'm afraid I'm with Josh, my regular viewing of this show ended when Bestwick, Schrader and Benson were gone.

I'm glad that Knaus and Waltrip have "figured" each other out, but really, I don't care that much what either one thinks, certainly not enough to listen to Mikey babble on.

Not to disagree with the masses so far but I can't wait for TWIN (I was at the race which was much better in person than on TV) Chad should be in a great mood and Mikey well with his wreck not so much.

Before we rant & rave lets get some facts in order. Originally it was Benson, Waltrip & good ole Kenny Schrader, not Spencer, as the expert panel. Secondly, the show never went past 60 minutes.

Lookin forward to the current trio tonite. SB be be ready.

Zig, you don't remember the season it was 90 minutes? That was a mess.

The best part of NASCAR Now early on was that they chose to use the MRN radio call of the Logano accident instead of ESPN's own Jerry Punch.

JD I noticed that too I just started laughing. Since I am watching everything I DVR'd yesterday JP's call is fresh in my mind. Wow talk about night and day

I watch TWIN, but I'm so over with RaceDay and Nascar Now. I'm tired of "all Chasers, all the time", so because of that, I'm not going to be watching either of those shows anymore this season. I just don't think the NN guys, despite the fact that I do appreciate their knowledge, can keep my interest in a race wrap up show when the race was terribly boring to watch. The only interesting part of Dover was, unfortunately, Logano's barrel rolling, and listening to Tony Stewart, who basically caused the wreck, explain to his crew chief what happened.

Sorry, but I'm just about finished with everything Nascar for this season. And the powers-that-be had better wake up and make some changes so they don't see their weekly ratings fall below the number 1 and see their attendance continue to tumble.

JD, I feel it would be more accurate to refer to Mikey as a NASCAR defender. There is a substantial portion of the NASCAR media ( for instance Ed Hinton, Mike Mulhern, Lee Spencer, and now Jerry Bonkowski)who are constantly criticizing and bashing NASCAR, often without regard to facts - but I guess that is what has kept newspapers so successful.

I remember when IWC tried 90 minutes. :) I thought it was fun though sometimes, it was chaotic.

at LEAST They were allowed to talk more then and not full of video like now.
I miss just "listening" to the guys having a real conversation without so many videos.

NN was great tonight as always because of Ricky Craven's insightful commentary and Randy LaJoy's irreverent attitude, how can you go wrong with that?

TWIN rocked tonight it's amazing the difference in Raceday Jimmy and TWIN Jimmy. Although he did say the B word and Chads reaction was priceless. Good thing it's cable TV.
NN wasn't bad either Nice balance of Driver and Crew chief but still prefer TWIN.

@Sophia-I remember that too..90 mins could be good or bad, depending on the race. What I really miss is the hot seat-it was a hoot!

Don't do ESPN anymore than I must unless GREAT reason.

YES! TWIN did rock tonight. Jimmy Spencer is the best thing to happen to Monday night in years! I've long GRIPED we needed a third panelist and tonight was great. I had two brief interruptions tonight so will have to catch the reair to see what Jimmy & Chad disagreed on (so much can't remember!(

There was more CONVERSATION it seemed and everybody had a real individual opinion. At one point after the bottom of the hour, I found myself smiling halfway into the commercial!

Steve did a FABULOUS job directing the conversation and Mikey was funny, too. It reminded me of the old Winston Cup show.

Luckily SPEED RE AIRS this great show at midnight and I've the timer on to rewatch it... Might tape the later version as I missed some comments from laughing and there was snappy banter!!!

Can't wait to hear what others think but my opinion won't change.

Mr. Excitement stood up to his nikname tonight!! LOL.

There is a new post up about the two Monday NASCAR TV shows.