"NASCAR Now" At The Hall Of Fame 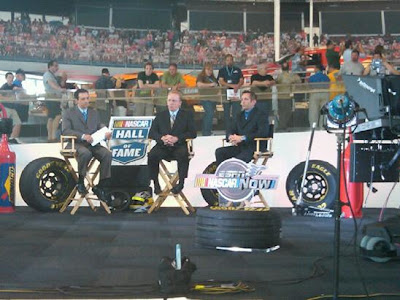 Just going to take a minute to tip the cap to ESPN2's NASCAR Now TV series. This show has come a long way in four years and has now reached an entirely new level.

Mike Massaro hosted with Ricky Craven and Greg Biffle alongside from the Hall of Fame in Charlotte, NC. Marty Smith and Shannon Spake were the reporters. Many other NASCAR on ESPN personalities were featured in soundbites on various topics throughout the show.

The program featured a tremendous amount of features and updates on topics from the All-Star race to the Hall of Fame inductions. Ryan McGee profiled Richard Petty as ESPN wrapped-up the inductee features.

A new weekend series is profiling interesting NASCAR fans. This weekend, deaf NASCAR fans at the track were profiled in a feature that focused on Ann Howell-Davis. Click here to see her Facebook page. This was just the type of inspiring and informative feature that NASCAR needs to get fans back to the sport.

If you watched this show, leave us a comment. Thanks to NASCAR's Ramsey Poston for the image.
Posted by Daly Planet Editor at 10:33 AM

JD, I agree, this show has come a long way from its inception. In fact I have even chosen it over RaceHub lately. The Monday show with AB is absolutely can't miss.
Today's show had a segment with a deaf Nascar fan whice I thought was presented perfectly.
Hope that it doesn't rain tonight