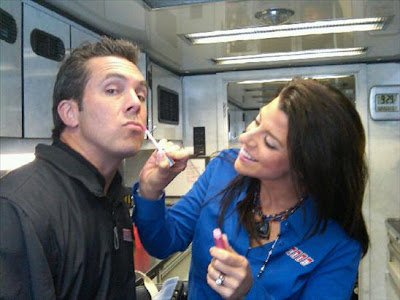 We would like your comments as you watch these programs on Friday. To add your TV-related opinion, just click on the comments button below. This is a family-friendly website, please keep that in mind when posting. Thanks for taking the time to stop by.
Posted by Daly Planet Editor at 7:23 AM

Congrats to Wendy & Jarrad, that is wonderful news.

oooh, there's an arca race today. I love watching the ARCA series -- I'll have to hurry to get home to see at least the end.

I'll have to join the blog in progress since I'm covering the work in my office alone today -- I'll need a beer for sure!

Congratulations to Wendy and Jarrod!

It was great reading and possitive until DWs name popped up. Thank you for posting the TV schedule with comments. This enables me to avoid any show that involves a Waltrip or Wallace. You would think the networks would figure out what drives people away (I don't think NA$CAR is smart enough to figure it out). One would think they would check the "because of" and "in spite of" groups and go with the larger group.

I just read this again and DW is on trackside tonight. Hopefully there isn't a guest on there that I might like cuz I am DONE with DW.

I'm not watching Trackside again (unless Jeff Gordon happens to be a guest) until someone tells me he is gone for the summer!

I just read on WABC Radio's website that an NHRA driver was killed during Sportsman qualifying in Englishtown today; no name released yet.

Thoughts and prayers to everyone involved.

You know it is great to hear about wonderful things happening to GREAT people. A baby for Wendy and Jarrad makes much of the other racing goings-on seem insignificant.

Oh- JD, the new look is only super, but I think I miss the blue. Congratulations.

I like your new look to the point that I'll have to change my blog's appearance too.

All of the stock car broadcasts on Saturday have someone on the air whose last name begins with 'WAL'
I'll be spending my time with F1 & the 24 hours of Le Mans.

1. Why did the TNT team do today's practice session? Usually the SPEED team announce all the practice and qualifying sessions. This seemed rather odd for a Friday practice, but ...

2. Why doesn't the TNT team do all the practices and qualifying sessions for their races? I've just found it odd that they don't use their own announce team except on Sundays. It's fine that TNT doesn't show the practices and quals on their own channel, but why don't they use their announce team for SPEED? (Especially now, with Adam Alexander, Matt Yocum, Phil Parsons, Kyle Petty, and Larry McReynolds on TNT and SPEED anyway)

I do like the new look, JD. It is easy to read!

I WISH kyle petty was doing quals, but it's dw. Did anyone besides me ever notice that when dw is on any show, all the people who are on with him turn into bobble-heads. Because they can never get a word in edgewise, they just sit & not their heads. I can't believe he & spencer on everything this weekend.

Sorry - make that NOD their heads.

why does everything have a Waltrip on it. I can't even watch the ARCA race now!!!!!!

To all TV stations, if it has a Waltrip in the booth, I WILL NOT WATCH IT!!!!!!! This means races, qualifing or any other show. No wonder the ratings are going down as fast as a toilet that just has been flushed...

Oh well, a good rerun of Ax Men is on.

The TNT team does one live practice session during the weekend. They have always done this and my impression is that nothing else can give them the real TV practice of spotting and working at the actual track and in the actual TV booth.

TNT has no additional NASCAR programming other than the pre-race shows and the races. SPEED handles the practice and qualifying for this part of the schedule.

Splitting the sessions between the TNT and SPEED guys in the booth is working well IMHO.

Thank you for the comments on the new look. I got some info that the Petty blue being used as the background made the blog hard to read for many folks who are slightly visually impaired.

Going to stick with the basic white and tweak the other elements for a while. Happy to have your feedback.

I thought blogger was being funky as I did get some error messages when I tried to comment here and on another blog earlier then I noticed the tweet feed explaining the change :)

Larry Mac was definitely prepared to be a Pit Reporter today :).

Ok is it just my monitor? This site looks different and is TWICE AS WIDE as my monitor? Can no longer read here w/o scrolling. Drag

It's getting so I detest Firefox. This blog is suddenly too wide for my screen. This and another local food blog are the only one's with this issue. If I try Opera or Chrome this site fits but the fonts too tiny...so guess I shall continue to use other browsers for some sites.

Crowd a little noisy for Trackside but just turned it on....I'm tired of the fans moving/waving junk. Now they are chanting.....sigh....

Not twice as wide. Same width with different template and colors.

Blue background is gone and we are working with white and gray to see which works best for everyone.

Sophia...I am using Firefox & it still looks normal. I have no idea why, but it can't be just a browser issue. Some other setting....

I know I have been absent for abit (personal issues) but I CANNOT handle any more shows where the Waltrips bros have any input! And DW & KW together...geez, give them a prozac or 2 already!! They wear me out..:( Besides the fact I want unbiased reporting..
Congrats to Wendy & hubby!

Weird how this laptop does this...if other browsers are fine...I wonder what it is in FFox...I DO MAKE THE FONTS bigger due to ongoing eye issues not correctable with glasses 100%. just odd that the OTHER blog fit fine...this one runs off the page.

I have a blog here at blogspot that fits my screen with FFox as does every other blog here & at word press...except for earlier mentioned local food blogger....hmmm

Trackside crowd really is annoying...love the show no likey the set up!

Using FF on a laptop no problems with it fitting on the screen at all :(