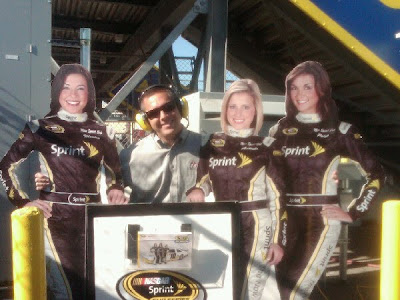 Posted by Daly Planet Editor at 7:45 AM

I love the changes being made at SPEED! Also read they have a new ticker coming as well. I also noticed they are slowing premiering their new logo. Saw new speed logo on their website today.

N Performance does NOT need an audience. The reason I liked it was that it was quick and to the point on car set ups.

I see no reason for FOUR guys. Chad & Bootie with Larry were enough.

SOunds like another case of fixing what isn't broken. They will dumb down the show or add audience participants. No thanks.

It was a rare QUIET, in studio show.

will not dvr that show. sigh

"Sticking with SPEED, the network has revamped the SPEED Stage and also the sets used for Trackside and RaceDay. This time, the fans are going to be included and not spend the entire time staring at the backs of the on-air announcers. Great news for all concerned."

Anytime I have gone to a race and walked by the Raceday set, I always thought it was stupid to stand around to watch a TV show being broadcasted and being behind the people doing the talking.

Let's see, where do I start? Since I wasn't that impressed with Adam Alexander's PXP on TNT, having him as host for the new show doesn't make me particularly excited. sorry that Krista won't be there - I like the way she presents things, but I'm happy that she will still be on the Truck Series broadcasts. Can't say that I'm happy that Motormouth Waltrip will still be part of the booth. He's a major reason that I watch the trucks with the sound off. I'll use the racebuddy app for the trucks, too - THAT I'm excited about.

It's about time someone got a clue to have the people on stage at trackside and raceday face the audience. That has bugged me ever since they did it. For me, until Speed does something that makes me want to watch these shows again, turning the stage around won't be enough.

HOF trying to do whatever it can to get people to buy a ticket, huh. I liked Performance, I'm with the anon who said it didn't need an audience. Clearly done and I enjoyed it. IMO, this may wreck it for me.

Rusty renewed through 2014 -- ugh! That will be reason enough for me not to watch ESPN's pre-race drivel.

Good update, JD, although one Miss Sprint Cup is too many for me hopefully they'll forgo the tweeting on Tuesday segment! Hope Randy makes it back on the panel for NN too.

Good moves so far by SPEED. This can be a big year for the network on the nascar side of things. Looking forward to seeing that new stage in action in Bristol next month.

I could do without Mikey on The truck races. They don't need selling, and he acts like every race he is about to wet his pants, he's so excited, how"this is the best racing in NASCAR today. And although some don't like, and I don't always agree with him, I could use more Jimmy Spencer

Any word on what the FOX graphics will look like? Will they have a full screen-width ticker like in the past or will it be smaller like what they've been using for the NFL coverage?

Wednesday's Race HUB Roundtable discussion is the only episode of this show that I've been able to watch all the way through and actually enjoy.

We actually got to hear folks talk about NASCAR racing environment without a lot of the normal HYPE and video blasting.

One Race HUB Roundtable each week would be a pleasant change for me.

Is Speed actually talking to NASCAR about using the HOF or is it the other way around in an effort to try to sell more tickets to the latest White Elephant of Charlotte? With as much money as the HOF is losing, a paying client like Speed will slow down the red ink but won't stop it.

I have to agree with Gina and Clay regarding Motormouth Mikey. One second of him talking is one second too long. All we need in the announcing booth is Rick Allen and Phil Parsons. It worked perfectly well in the past, was less irritating, and actually made the Truck Series broadcasts more interesting. Bigger isn't always better.

And just what purpose does Miss Sprint actually serve other than filling space and wasting air time?

Jim Utter Posted Larry Mac is off Trackside, you heard anthing about that? Would love to have more quality discussion and less Cheerleading for NASCAR..

Can't be happy all the time but Speed sure tries to make a lot of us mute the sound and use MRN for audio a lot. Hyper, biased and it's all about me, me, me Mike W. just makes us do it more often.

I guess it must be great if you are a Waltrip and you know that no one will fire you for your opinions no matter what the fans feel or think...

I hope Hermie is good, but AA will be missed. He is a fantastic reporter. I don't see hosting or play-by-play as his strengths.

"...SPEED and NASCAR.com have teamed up to offer the online TruckBuddy application free..."

Great news! Its about time that the truck series received some serious support.