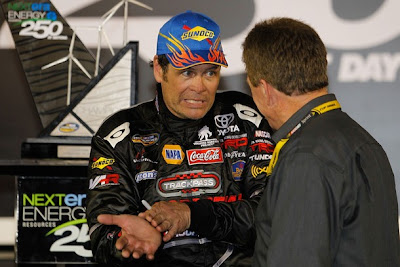 I enjoyed the K&N race & didn't realize it was commercial free until Mike mentioned it! I was watching some great young talent show their stuff! Definite kudos to SPEED for showing it (and maybe giving Becky a vacation next week :p) & Denny's Charity event.

Look forward to seeing what SPEED has up their sleeves with the various things they're doing with Twitter & Faceboook the preview sounds great!

It's going to be a long day!

Well remind me to never watch the Denny Hamlin charity race again. They just made up the rules as they went along. Changed the starting grid 3 times AFTER qualifying. Total BS. I know its a charity race but its still a race.

On a positive note the K&N East race was fantastic. Im so glad they decided to show it to us. Im convinced the bias-ply tires are made that race so good. Outstanding racing. The coverage was great too. Commercial free. Thanks Speed!

Im looking forward to the 2 Waltrips! This will be fun I hope it works :)! And im giving it a chance unlike most

Oh no, two Waltrips in the booth? Will either one take a breath??? Really enjoyed Speed carrying the K&N race I fell asleep for the Hamlin even though. I don't know whether I'm really looking forward to the noise that will be coming from the booth tonight.

Mr Editor -
First, a comment on Thursday's broadcast and "Thanks, SPEED" for a great effort from RIR ...Mike Joy was indeed a 'joy' to hear ...a flashback to his early days calling NASCAR events ...the two Kennys knew their role and filled it ably
Second, for tonight's Waltip overload, radio preset for MRN broadcast ...RaceBuddy bookmarked ...mute button rechecked and working ...bye SPEED audio, I'm not interested in the bottom-of-the-barrel comments ahead
Third, SPEED showed utmost respect for youngsters, although it was curious to hear the names of Blaney, Elliott, Lajoie, McReynolds among others throughout the broadcast ...interesting also to hear 20-year-old call 15-yr-olds "youngsters"
Walter

It was great to have racing on a Thursday night, but it would of been cool to see those cars on a real "short track". Those late models should be on half mile or less for real racing action.
I did like how they threw random yellows whenever they felt like it. Kinda like Cup racing.

The first NNS practice is on now and we've been having serious audio problems with pixelization. Don't know if its just us in the Northeast??

JD, could you please stop with the Waltrip pictures? Mornings are hard enough without having to look at those two.

BTW Rick Allen should also carry a huge roll of duct tape to the booth. It will come in handy when the mouths start taking over the show. This is not going to be fun.

With both of the Motormouth Brothers in the booth, this race will probably have the lowest ratings of the season. None of the toher announcers will be able to get in a word edge-wise after the race is introduced. It'll be All Waltrip All The Time.

I had to warn a blind friend of mine about this so he can find the race on the radio.

Isn't this sort of thing prohibited under the Constitution as cruel and unusual punishment?

RacinReport--someone asked Steve about it last night & Steve said it was Denny's deal, his rules. He seemed confused about that the rules were as well since they changed every 5 seconds. But overall I enjoyed it :)

I actually enjoyed the races last night with the two Kennys. They did a good job. just tell us what we can't see on TV, don't over dramatize things, etc. In the medical profession there is the "DO NO HARM" saying. That should be true for race broadcasts, first do no harm. I just saw an add for tonight's Nationwide race with the two Waldrips, saying it would be like no other race we've seem. That scares me as these two always try to be the show and therefore ruin the races for me. Why can't they take the low key approach and "DO NO HARM".

We really lucked out today.No DW around so we could watch cup practice for the first time this year. Also found out that MRN will carry the NW race so we can mute speed channel and not have to listen to Waltrips and their stupidity.Unlike Jonathan, we have heard them before and they are not fun. Really enjoyed all the racing Thursday night. Well presented and no DW. Thanks to Speed for showing mercy.

Trackside used to be a 'Do Not Miss'show at our house but not anymore.It is now the DW show and is too much wear on the mute button.Just not worth the aggravation.

Speed has done a good job so far today. Having Kyle Petty instead of DW made a huge difference

Yep, haven't watched TrackSide all year for the same reason.

Trackside is the worst show on television, period. I used to watch it fairly often, but it is just a showcase for driver's sponsors, and the wealthy driver's tax shelters...er "foundations." The show is neither funny, nor informative.

But, Thursday night's surprise double-header with the two Kennys was a RIOT! Not so much Wallace, but Ken Schrader had me in stitches all night! Actually, Wallace almost acted as Schrader's straight man, setting him up for some hilarious lines. You could really tell that Mike Joy was having fun, and I'm sure he enjoyed the break from the McWaltrip routine.

I'm trying to watch the nationwide series qualifying and I' not liking what I'm hearing from the Waltrip brothers. It's very disappointing that the people in charge of the TV events don't listen to the fans when it comes to choosing commentators. Those two have no clue what the fans want to hear, too self absorbed. Oh wait!! Mikeys making believe he cares about the tornado victoms in Alabama. Anyone who falls fot that should call me for a great investment deal. Land in Florida!!

Trackside became a joke as soon as they decided to cater to the yahoos in the background competing for tv time.

The first season they were more like fireside chats and you got some good stories from legends and active drivers alike.

Wow just heard Sam Hornish is on the front row for tonights Nationwide race! Sweet wish him the best of luck, I miss him in the Cup series... But dont want him going back to Indy cars so good luck Sam!

anon 4:24--agree! It was an awesome night of racin'! Everyone knew their role & no one was clambering for attention.

anon 5:03--there was one point during quals that Rick darn near seemed to be apologizing for needing to talk because DW & Mikey were busy yacking away.

So far I think the booth and camera work are not bad but not good either. Broadcast is ok so far.

During that wreck I would have zoomed out not zoomed in.

Wow, two Waltrips in the booth that own a few of the cars that are in the race and three Wallaces in the race plus another car a Wallace owns in the race. Just what every fan wants, a non biased straight forward sport. How did the Wallaces and Waltrips get so much power in the broadcast arena of nascar? You can't watch any race without noticing the overfocusing on cars owned by them and now you have to go the extra length to find another source just to listen to the broadcast because of these two families. Maybe if enough fans demand that nascar keep them on air all the time, nascar will do the opposite like they do with everything else we want. I hit the mute, saw the over focus on Waltrip/wallace cars and watched more of the re-run of the royal wedding on the other tv my wife had on, and it seemed like a better race ... the wedding. I did notice that Speed had Danica Patrick finishing in the top ten on the last lap start finish line. Did something happen to Josh wise while I was going back and forth with the royals? The poor camera guys thought the 7 car was Robby Gordon and kept trying to keep it off the screen and didn't realize it until the last 28 laps. Way to go Speed.