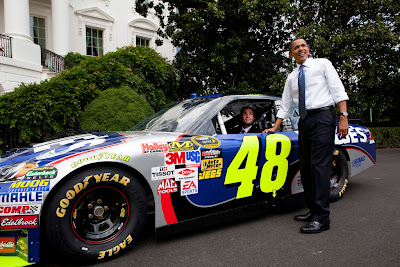 Updated: We are being informed by the White House that the live streaming will begin at 4:50PM ET today. Thanks to them for taking the time to update us.

Tuesday is the annual visit of the NASCAR Chase drivers to the White House. NASCAR chairman Brian France and president Mike Helton will also be attending as will other personalities in the sport.

Last year, five Chase drivers turned down the invitation pointing to scheduling issues. This move blossomed into a political football that turned a simple promotional opportunity for the sport into partisan politics. The national media headlines were not about who was there, but instead who was not and why.

This year all hands are on deck as the entire cast of Chase drivers lead by Tony Stewart will assemble for some casual conversation, a photo opportunity and some words from the President that he will most certainly not have written himself. It''s just another day at the White House, regardless of who is sitting in the Oval Office.

Several years ago, ESPN's NASCAR Now originated from the White House lawn as Nicole Briscoe and Brad Daugherty sat down live with President Obama. The trio talked about why a healthy NASCAR is good for the economy. It made a statement that the President took the time for the interview.

NASCAR and ESPN both got good mileage out of having the President on TV and since that time he has kept his relationship with the network going strong. Rarely has the NCAA basketball tournament had a more celebrated bracket than the one unveiled by the President live on ESPN. While his wife has attended a NASCAR race, the President has yet to make the trip.

This year things are a little different. There is no live TV from the lawn. The White House visit is not even mentioned on the weekly ESPN Motorsports update. Shannon Spake will host NASCAR Now at 3PM from the network's Connecticut studios.

Race Hub on SPEED is now on the air Monday through Thursday. The White House visit is not listed on the rundown of features or news reports for the 6PM show. There is no other NASCAR TV that day.

A check of the NASCAR.com website late Monday night reveals no story promoting the White House visit. There is also nothing listed on the SiriusXM NASCAR website about coverage.

It seems ironic that in a sport that relies heavily on the electronic media for promotion, the only live coverage will be streaming of the event on the White House website. Instead of NASCAR's TV, radio or digital media partners it will be the federal government  offering live coverage to any fan with a laptop or smart phone.

Click here for the live streaming link. The coverage should start shortly after 4PM ET.

We welcome your comments on this topic. To add your opinion, just click on the comments button below. Thank you for taking the time to stop by The Daly Planet.
Posted by Daly Planet Editor at 1:00 AM

Is this playing the political card at the expense of all the people not involved in nascar management, or just another incident of how low nascar has fallen under the leadership of bzf and the nascar tv partners? How much farther can it go before a major shakeup occurs? MC

Sorry, I can't muster up much interest in the drivers going to the White House.

No political card, just a photo op and media avail.

Just pointing out the lack of current coverage from ESPN and SPEED as the sport is now in year 6 of the current 8 year NASCAR contract.

"Updated: We are being informed by the White House.."

So how does it feel to type out that line? (I just had to ask, even if it resembles a Jamie Little feelings question)

Just some low level staffer with a smart phone! I know exactly where I stand! #Low

No political perspective from me either, JD. Just not a lot of interest for me in this particular photo op.

as you point out though, it is a missed opportunity for ESPN and Speed.