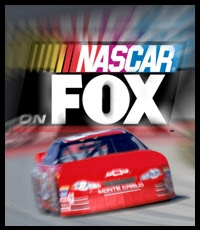 After the chaos of the early weekend in Las Vegas, the NASCAR on Fox crew faced a new and interesting challenge. Around the world, the news had already been spread that the new track demanded a hard tire, traction was at a premium, and Tony Stewart had already trashed everything associated with the event.

The reason they call Tony "Smoke" is because he used to smoke the right rear tire on his sprint car until it was shredded in order to win a heat. However, this was NEXTEL Cup at Las Vegas, and not the "B Main" at Knoxville. To see the full-sized Cup cars smoking the right rear into the turns at almost two hundred miles an hour was new to the Fox crew. Mike Joy began by guessing that Jeff Gordon, a sprint car veteran, was having trouble when his tire began smoking. It was clear that the "NASCAR guys" in the booth had never seen this, and continued to be confused throughout the telecast. They never detailed that the set-up and the hard tire resulted in a group smoke-out the likes of which I had never seen on a NASCAR Sunday.

The early laps forced Mike Joy to break out every racing cliche in the book to try and talk around the fact that the new track was a tire killer. On the edge of control, the best drivers in the country slammed the wall time-after-time. No one objected, and Darrell Waltrip continued to praise the track and its reconstruction as though he was an SMI shareholder. It may be his opinion, but certainly the reality of the racing proved him very, very wrong.

Single file racing and plenty of solo spins made a long event boring, despite the Fox 3-D animation attempts and the endless coverage of pitstops. With less than ten laps to go, DW said the race was "just getting interesting." That may be the most factual statement he made all night. Interesting that both DW and his brother Michael spent the weekend as the "defenders" of the track on every media outlet possible. That kind of makes one wonder.

Unfortunately, the NASCAR on Fox gang stuck with their worst production decision of the year. That is, to show no cars battle to the finish other than the leader. If there was any confirmation that there are problems in the Fox Production Truck, this is it. As Jimmy Johnson crossed the finish line all alone, the battles were behind him. But to Fox Sports, suddenly this season nothing matters but the winner. Nothing. Not racing, not finishing, not on-track action.

How is it possible that every fan of every driver other than the winner does not get to see their driver cross the line and have their position posted? Even twenty years ago, ESPN and TNN made sure to follow all the racers on the track to the finish. The battle for fifth may be a pivotal shift in the luck and season of an entire race team. How does this suddenly not matter? Imagine watching a horse race where only the first place horse was shown crossing the finish line. This is just an awful end to a mediocre telecast at a boring track. People tell me that NASCAR is on the decline, and until now I have never believed them.

Unfortunately, the last lap of the NEXTEL Cup race in Las Vegas has changed my mind. I didn't see my driver finish, I don't know where he ended up, and I don't know who he was racing in the final lap. Someone in the Fox Sports Los Angeles network headquarters needs to get this message, and make a change.
Posted by Daly Planet Editor at 7:48 PM 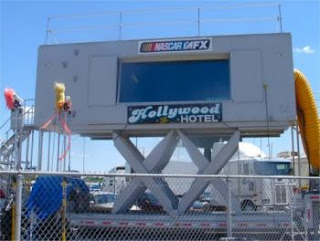 Somehow, Chris Myers has enjoyed the hospitality of the "NASCAR gang" at Fox Sports for the past several years. Clearly an outsider, Myers just can't take anything associated with NASCAR too seriously. That is a shame.

This weekend in Las Vegas, there was something to take very seriously and Myers, Hammond, and Darrell Waltrip decided not to face the challenge. After practice, qualifying, and the Busch race, it was clear to any good TV journalist that there was serious trouble about to happen. Perhaps, it might not be fun. Perhaps, it might not be nice. Perhaps, someone was about to face serious injury in a high speed auto race on a new track with a bad tire.

To Mr. Myers and the pre-race crew, that did not matter. If there was every a time to knock off the nonsense and deal with a serious issue at hand, it was Las Vegas. The General Manager of the track, Chris Powell, was not on the program. The owner, Bruton Smith, no where to be found. But we did get the Blue Man group, Marky Mark, Magic Johnson, and even a Kyle Busch slide show. What a shame we did not get Busch Highlights, Cup practice highlights, qualifying highlights, or anything else that had to actually do with the race.

From the highs of a great qualifying show, the NASCAR on Fox crew absolutely missed the mark on this entire thirty minute broadcast. What a shame.
Posted by Daly Planet Editor at 4:26 PM