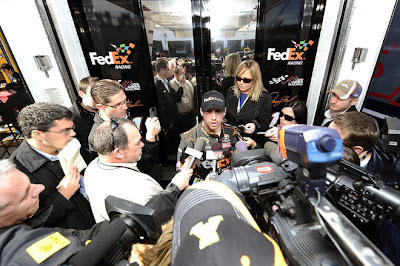 The Sprint Cup Series event in New Hampshire featured great weather and a good crowd in the stands. What it did not feature was racing.

Nicole Briscoe led Rusty Wallace, Brad Daugherty and Ray Evernham through a one-hour pre-race show. Wallace made some very interesting comments on various topics that were clearly greeted with mixed reactions by the other members of the panel. It made for an interesting show.

NASCAR moved the race start back by an hour to avoid the NFL early game starting at the same time. In the pre-race show, it seemed ironic that an edited feature focused on Dale Earnhardt Jr. and his enjoyment of NFL fantasy football. The extensive piece certainly highlighted the positive aspects of the NFL.

Allen Bestwick led Dale Jarrett and Andy Petree into the live race telecast from the TV booth. Bestwick once again worked from start to finish and made sure as much information as possible was passed along. Unfortunately, this flat track has traditionally not allowed for much passing and that was the case once again.

Jarrett and Petree were happy to offer comments, analysis and opinion but often there was a single-file parade. It did not help that one car dominated the vast majority of the event. The good news is that the pictures were pretty and the audio was outstanding. It was a day made for TV.

The bad news is that several cautions for debris came out and ESPN totally avoided showing the offending piece of trash or car part on the air. A late caution that bunched up the field was really a tough sell. Even Bestwick just avoided the topic. Just taking five seconds to show the safety truck picking up debris would send a message to TV viewers that things were being done for the right reasons.

In the end, the run to the flag was uneventful. Like many track position races, this one ended with a thud. The Chase teams dominated and the storylines continued to be about the championship run.

We welcome your opinion on the TV coverage of the Sprint Cup Series race from the New Hampshire Motor Speedway. Comments may be moderated prior to posting. Thanks for stopping by.
Posted by Daly Planet Editor at 5:02 PM 43 comments: 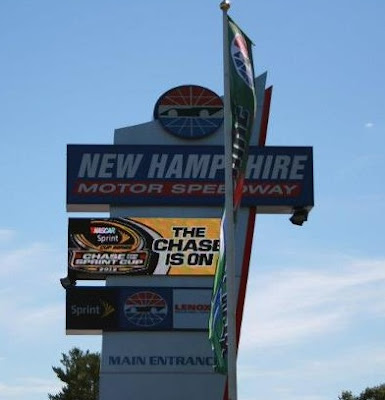 Like most fans, I watch NASCAR races on TV. The Daly Planet blog is a project started back in 2007 to document how the races were presented by the new NASCAR TV partners. Back then there were new faces in new places and a lot of enthusiasm about the eight-year multi-billion dollar TV contract.

Now, six years later the very topic of NASCAR TV raises deep feelings and brings sharp comments. With the advent of social media many fans have strong opinions on everything from the TV production style to the amount of commercials in the races. Once again this season ESPN finds itself battling NFL football as it tries to make sense of NASCAR's playoff format.

The fundamental truth that has been a motto since this blog began was that TV was at the races to show viewers what the fans in the grandstands were watching. It's a simple concept. The idea is that the priorities of the TV producer, director and announcers were to "extend" the fan experience to those watching on TV.

After Chicagoland's lack of excitement, this week's race in New Hampshire is probably going to determine for some folks whether they watch the rest of the Chase live or switch to NFL football and record the racing. That is a valid question given the state of affairs in the sport right now. I find myself in that mix.

As we have said many times, ESPN paid the money and can present the Chase races as they see fit. That simply does not guarantee that fans will watch. The ultra-focus on the Chase to the point of ignoring the race is overwhelming. Every driver has fans. Those fans deserve to be informed regularly about their driver in a three hour telecast.

New Hampshire Motor Speedway is a flat track that in the past has seen little passing. Racing for position has come on restarts and pit road strategy and pit stops may well tell the tale. Contrast that with the local NFL hometeam playing a three hour game that stops for TV commercials, offers focused coverage of the on-field action and has the potential to generate excitement on every play.

The ESPN presentation of the Sprint Cup Series offers two cars on-camera at a time. Restarts are shown from in-car cameras and tight shots of the leader. Replays have been used for years to catch fans up on the actual racing and the incidents during the event. Rarely are stories like a fast car coming back through the field or a top driver struggling mid-pack reported.

All that was originally asked of TV when it was incorporated into NASCAR racing was that it bring the experience of being at the race to the viewer. ESPN has clearly shown that the network alone will decide what is important on the track, what information should be passed along and what topics should be mentioned.

Loudon is a litmus test for me. Even with the right announcers in place and all the top TV equipment at the ready, the ESPN producer and director have been reluctant to just show the best racing on the track and let the Chase settle itself after the race. The radio coverage does that. The fans in the stands do that.

If ESPN once again stumbles through a telecast dominated by the Chase storyline and meaningless tight shots of pairs of cars, it's over for me this season. The DVR is a great invention and that is where the remainder of the Sprint Cup Series races will go. I just can't watch a race without "watching" the racing.

It should be interesting to see how ESPN decides to produce this coverage. Ratings are lower in the NFL season and something needs to happen to make fans watch NASCAR this Sunday. Choosing pictures that reflect the best racing action instead of a continual focus on the Chase drivers would seem to be a viable solution.

Join us on Twitter using the #TDP1 hashtag as we live tweet the TV coverage of the race starting at 1PM ET. There is a ton of useful racing information on Twitter, including lots of team-specific content that never makes the race telecast. We will also take your race comments here and there will be a new post up when the telecast signs-off for your opinions.

Thanks as always for taking the time to stop by The Daly Planet.
Posted by Daly Planet Editor at 1:12 AM 14 comments: