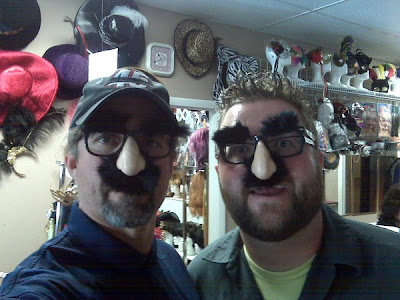 It doesn't seem like all that long ago we were looking forward to the Fox coverage of the Daytona 500 and the first edition of RaceDay on SPEED.

Most of the NASCAR TV gang takes their last deep breath this weekend before the run to the finish line in Homestead. SPEED's truck series crew heads to Chicago for a one-day show while ESPN sends the "B team" to Montreal for a Nationwide Series event.

At this point in the season, the NASCAR TV trail has left Digger, Chris Myers and the Hollywood Hotel far behind. It has welcomed the Twittering Kyle Petty to the broadcast booth and made "shootout style" the two most hated words in the NASCAR vocabulary.

Over in the TV studio, Nicole Manske has held her own, Mike Massaro has made himself at home and Chad Knaus has emerged as the perfect foil for the outspoken Mr. Waltrip.

Meanwhile, John Roberts, Steve Byrnes and Larry McReynolds continue their on-air battle to see who really is the hardest working man in NASCAR TV. At this point of the season McReynolds continues to work as an analyst in the booth for SPEED, as the host of NASCAR Performance and as a panel member on Trackside. He seems to be leading the race.

Memories of the Bill Weber for Ralph Sheheen swap have faded, with Sheheen still being seen once and a while on The SPEED Report. Weber, not so much. The lingering TNT memory is the versatile RaceBuddy that once again showed just how much better racing can be with a live online presence.

Krista Voda has quietly moved through her roles as a NASCAR on Fox pit reporter, the truck series pre-race host and a co-anchor on the revamped SPEED Report. Last week, she even guest hosted Wind Tunnel. Is there anything she can't do where TV is concerned?

Surprise of the season has to be Adam Alexander. Solid as a truck series pit reporter, he has built the Sunday NASCAR in a Hurry show into a neat little package. Top it off with his strong performance on The SPEED Report and Alexander is having an outstanding year.

If you find "buttoned up" in the dictionary, there is probably going to be a picture of Allen Bestwick. This Red Sox loving Rhode Island native worked himself up from an ESPN pit reporter to once again stake his claim as a major NASCAR TV presence. On both NASCAR Now and when hosting live races from the Infield Pit Studio, Bestwick has just the kind of controlling but friendly presence that is often needed.

Speaking of control, Randy LaJoie this season has been fun both on the ESPN races and as a panelist on NASCAR Now. LaJoie made the combination of Rusty Wallace and Marty Reid work on the Nationwide Series telecasts. LaJoie continually kept Wallace loose and laughing by giving him on-air grief about the driving exploits of his son Steven. Unfortunately, LaJoie will not be in Montreal as Andy Petree will make that trip.

Fans may remember that last season around this time a lot of things began to happen. Once college and pro football began, the post-race press conferences left ESPNEWS. The Nationwide Series pre-race shows often disappeared and sometimes only a good open field tackle allowed a college football game to end just in time for the green flag. Let's hope the ESPN programming folks have a little more mercy on NASCAR fans this season.

If there is something that has grabbed your attention, either good or bad, about this NASCAR TV season feel free to tell us about it. Once things get back underway, there is going to be nothing but a media sprint to the finish line. Thanks for hanging in this season with us and sharing your views on this huge sports TV package.

To add your comment, just click on the comments button below. This is a family-friendly website, please keep that in mind when posting. Thanks for stopping by.
Posted by Daly Planet Editor at 5:00 AM 60 comments: