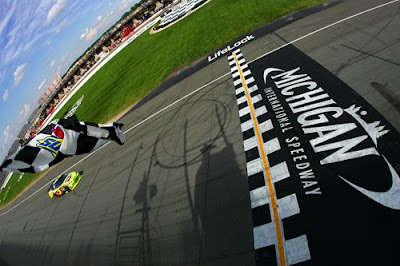 When the ESPN portion of the Sprint Cup Series television package rolled around at the Brickyard in July, there was a lot of fan interest in what may have changed since the 2008 season. After the Monday telecast from Watkins Glen, the answer continues to be...nothing.

Click here to review the fan comments from all over the nation about the race. There are no comments on the linked column except for those offered by fans. Here are some excerpts:

SalB said...
Trying to make sense out of how any race is unfolding since ESPN took over from TNT is almost impossible. Overusing bumper/in car cameras is irritating at best. Covering only the top runners is completely disorienting. If you can't see the race as a whole, it's just so much noise. Their coverage has been a big disappointment. DJ and Andy in the booth are good, but seem limited by what the director is willing to show on screen. All in all, an embarrassing effort from 'The Worldwide Leader in Sports'.

philg said...
Ok, so we're used to Jerry Punch and the boys in the booth sounding bored by what's in front of them. Nothing changed, even as Ambrose closed in on Stewart and even as questions lingered over who would have enough fuel to finish. The opportunity to build drama and suspense was right in front of the ESPN crew and like so many other things, they missed it. But more than any of the normal shortcomings that we're forced to suffer through each week, the most shocking and downright pathetic thing was ESPN totally missing Ambrose's pit stop on lap 55 (kind of like they missed Harvick's pole-winning lap Saturday). Since practice, ESPN made Ambrose a focal point of its coverage. He was the in-race reporter, his car was crawling with cameras and the booth repeatedly told us how flabbergasted they were by his team's pit strategy. So when Ambrose's pit strategy comes together and his makes his last stop, ESPN is clueless and doesn't tell us until eight laps later. Unforgivable. If you're going to build the man up as a story line for four days, someone should have had eyes on that car at all times, period.

bevo said...
There is a focus that is lacking with ESPN. The broadcast has the feel of an effort run by committee. Every aspect has to be used - in-car cameras, in-race reporters, foot cam, tech center, "cool" camera shot of the week, "the" stat, "the" feel-good story. All of these must be used whether or not they help describe the race for the viewer. I feel sorry for all of the long time technical people behind the scenes who I am sure want to produce a great broadcast and are faced day in and day out by bosses who have no idea what they are doing. Monday was a train wreck of epic proportions.

These are just three of the comments offered publicly by fans. Several hundred more arrived by email. This weekend, SPEED is handling the practice and qualifying coverage for both the Nationwide and Sprint Cup Series from the Michigan International Speedway.

In the heart of the season, ESPN is removing the play-by-play announcer from the live Nationwide Series telecast. Instead, four NASCAR on ESPN analysts will sit in the broadcast booth and make conversation. Here is ESPN's description:

Here are some additional quotes on this upcoming event from a Tuesday conference call:

Andy Hall, ESPN Media Relations Manager: This whole idea came about from our Vice President of Motorsports, Rich Feinberg and his experience going to dinner with these guys over the last few years and just listening to the stories that they could tell and knowledge and experience that they have in NASCAR racing. So, the idea was born of doing what we're calling "backseat drivers" and just having these four guys in the booth commenting on what's going on with the racing and sharing their knowledge of the sport.

Rusty Wallace: It's a pretty cool idea that Rich Feinberg has come up with. Myself and Ray and Andy and DJ, we've probably got a lot to talk about, that's for sure. We've all won at Michigan before and we've all got stories to tell. I guess my biggest concern is that I don't step over the top of each other and we don't keep interrupting each other and stuff like that. It's going to be a different process for sure; instead of saying here they go, here they come, this guy is passing this guy or whatever, we're going to be able to comment on how the race is going and from our past experience what we thing we should do to do win is race or what I would have done or what Ray might do. I'm excited about it, and when it's all said and done, it's either going to work or won't work and we'll see what happens.

Ray Evernham: As much as we've done together, we still have different opinions on things, and it's great to be able to spar back and forth, and you've got DJ and Andy in the booth, and they're kind of you know, they're one way, more conservative, type of approach, and then you've got Rusty and I, we're wide open, do, whatever, gamble, two tires, no tires. So I think it's going to be a great deal and I'm really looking forward to it. Unlike Rusty, I really believe that we're going to be talking over one another and stopping and saying, no, man, that's not the way it is. But I think that's what ESPN wants, and I think that's what the fans are really going to enjoy.

The disparity between the comments of the fans and those of the ESPN folks is quite clear. Rather than address the TV issues lighting up the Sirius phone lines and filling the Internet chat boards, ESPN is instead removing the critical function from the live race telecast that provides the information, builds the excitement and coordinates the on-air traffic flow.

This is the first Nationwide Series season where ESPN has brought in motorsports TV veteran Marty Reid to call the play-by-play down the stretch. Reid recently handcrafted the best telecast of the season from O'Reilly Raceway Park in Indy. He has brought the series profile up considerably in only a handful of events with his enthusiasm and personality.

Now, Reid will not be at MIS and in his place will be conversation. ESPN's analysts had plenty of time in the rain at both Pocono and Watkins Glen to break out the old stories and fill hours of time on the air. At a big track like MIS, Reid's ability to generate excitement in the play-by-play role will certainly be missed.

What is your opinion of this TV experiment? A creative idea for a series that needs something new? A self-indulgent moment from ESPN? Perhaps, an audition for Dale Jarrett as the leader in the TV booth? How do you see this idea from your perspective? Will this TV twist make you tune-in to a Nationwide Series race?

TDP welcomes your comments. Just click on the comments button below and follow the easy instructions. This is a family-friendly website, please keep that in mind when posting. Thanks for taking the time to stop by. Follow TDP on Twitter at twitter.com/TheDalyPlanet.
Posted by Daly Planet Editor at 1:00 AM 76 comments: